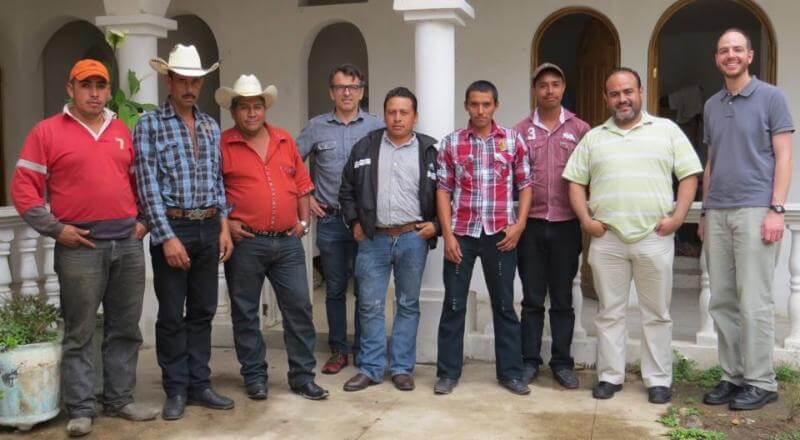 Vancouver, June 18, 2014 – Seven Guatemalan men filed a civil lawsuit today in a Vancouver court against Canadian mining company Tahoe Resources Inc. for injuries they suffered last year when Tahoe’s security personnel opened fire on them at close range. The men, residents of San Rafael Las Flores, where the company’s Escobal mine is located, allege that Tahoe is legally responsible for the violence inflicted on them as they peacefully protested against the mine.

The claimants are supported in Canada by a legal team comprised of Vancouver law firm Camp Fiorante Matthews Mogerman (CFM) and the Canadian Centre for International Justice (CCIJ). In Guatemala, they are represented by the Guatemalan Centre for Legal, Environmental and Social Action (CALAS).

The lawsuit alleges that the shooting was a premeditated attempt by mine security personnel to eliminate resistance to the mine – Tahoe’s lone asset – and that the company is liable for battery. Despite strong opposition in several communities, Tahoe has continued the development of the mine and began commercial silver production in January 2014. In early April 2013, exercising their right to protest as guaranteed by the Constitution of Guatemala, residents of San Rafael began peaceful stand-ins on a public road running past the mine. The injured men claim that on April 27, 2013, Tahoe security personnel in riot gear emerged from the mine site and opened fire. Even as the men fled, the shooters pursued them down the public road and continued firing.

“They shot me in the face from a few metres away and then they shot me two more times, all because I stood with my little brother and my father in front of the mine’s gates,” said plaintiff Luis Fernando García Monroy, who was 18 at the time. “I had multiple surgeries but I still have trouble breathing so I can’t work and I lost the ability to smell,” he added.

The filing alleges that Tahoe’s Guatemala Security Manager, Alberto Rotondo, a Peruvian-Italian man who was brought to Guatemala for the Escobal project, ordered the shooting. On April 30, three days after the shooting, Rotondo was arrested at Guatemala City’s airport as he was apparently trying to flee. He has been criminally charged in Guatemala with obstruction of justice, causing serious and minor injuries, and mistreatment of a minor. His pre-trial proceedings are still on-going. Another member of the security team was also arrested and charged with concealment. Six of the seven shooting victims are civil parties in the Rotondo prosecution in Guatemala.

The Vancouver lawsuit claims that Rotondo concocted a plan to use force against the peaceful protesters, fabricated a story that the protesters had attacked mine employees, ordered security personnel to tamper with evidence at the crime scene and tried to flee the country to avoid legal problems.

“Rotondo must be punished in Guatemala for his criminal acts but even this would be only partial justice,” said Rafael Maldonado, Legal Coordinator of CALAS. “These local men, like many others, were protesting the presence of the mine because they are concerned about possible environmental impacts and the lack of meaningful consultation with the community of San Rafael Las Flores. Rather than engage them about their concerns, the company allowed its security personnel to attack them,” he said.

“This Canadian lawsuit seeks to address the larger issue of corporate responsibility and Tahoe’s conduct,” said Joe Fiorante, Q.C., a partner with CFM. “The case is before the B.C. Supreme Court because Tahoe is incorporated in British Columbia, conducts business here and is listed on the Toronto Stock Exchange. Tahoe must be held accountable for the serious harm it has caused to the victims,” he added.

This is the first civil suit in B.C. against a Canadian mining company concerning violence in another country. While a small handful of similar cases in Ontario and Quebec initially failed to advance, largely for jurisdictional reasons, three lawsuits against HudBay Minerals Inc. for alleged abuses in Guatemala are now moving toward trial in Toronto. In 2013, the judge in those cases ruled that a Canadian parent company may be held directly responsible for its own negligence in failing to prevent abuses by security personnel in connection with overseas operations.