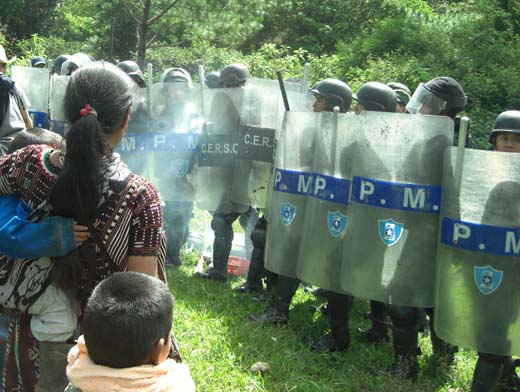 Rights Action has sent a media alert concerning the safety of members belonging to the National Committee of CUC (the Campesino Unity Committee) and more than 100 Maya Keqchi families from the Alta Verapaz region of Guatemala. Since June 30, they’ve faced multiple attacks and kidnappings by paramilitaries associated with the bio fuel agribusiness, Ingenio Guadelupe.

See below for Rights Action’s alert, followed by a letter you can send to the Inter American Development Bank, who promotes the bio fuel industry in Guatemala.

Historically the area known as Finca Los Recuerdos has been farmed by the above mentioned communities as it pertains to their territory. Approximately three years ago a bio fuel agribusiness, Ingenio Guadelupe, began cutting forests and planting large extensions of sugar cane for ethanol production. The indigenous farmers have been extremely concerned about the damage to the environment provoked by this business, not to mention the invasion of their territory.

June 30, 2008 a group of approximately 60 Keqchi families entered the Finca Los Recuerdos at approximately 7 am to establish temporary shelters and once again begin planting in the area.

The families were viscously attacked by paramilitary security forces associated with Ingenio Guadelupe. The group of men, women and children were fired upon and a helicopter property of the company attacked them flying over the families while only approximately three to four feet off the ground. In this way the group was forced to abandon the lands. One 35 year old father for three children, Cristobal Coc Cuc, was shot and hospitalized.

July 1, at approximately 9 am, the families and representatives CUC, approximately 200 people total, gathered in Panzos to protest the violence perpetuated against the communities, and demand prosecution of those responsible and the clarification of the land title situation. The peaceful group was again attacked by the paramilitary forces with the direct participation of Carlos Withman and Guillermo Urrutia, two managers of the ethanol agro business.

The two company managers, and members of the paramiltary security force that accompanied them, fired into the peaceful crown, dispersing them, and seeking out the CUC National Committee members. They shouted that they intended to kill Aparicio Perez and Rafael Gonzales, both of whom were able to escape. They then proceeded to kidnap two women, Maria Martin Domingo and Fabiana Ortiz, members of CUCs National Committee. The crowd identified the house they were taken to, and held for several hours. Only CUC initiated legal actions in Guatemala City did a judge and the police enter the house to liberate the women. The assailants continue to operate in the region with absolute impunity.

The situation in Panzos is emblematic of the agrarian situation in Guatemala in which the Guatemalan government acts with complicity with large landholders and agro businesses to illegally obtain land belonging to indigenous communities. Violent force either committed directly by State security forces, or paramilitary illegal actions tolerated by the State, are used to violently evict communities without establishing clarity in terms of land rights or much less protecting the special rights of indigenous communities as guaranteed by international human rights standards.

The agrarian conflict has become worse in recent years with massive investment in bio fuel production, both in ethanol via sugar cane and in bio diesel through african palm production. The rapid growth of bio fuel industries in Guatemala was stimulated by the interest of the Inter American Development Bank in bio fuels.

In January 2008, the Inter American Development Bank approved a technical grant to help Guatemala develop plans to promote the bio-fuel industry. Over the past several years Inter American Development Bank and the World Bank have promoted bio-fuels as an alternative to slow global warning. Communities around the world immediately began denouncing the deforestation and desertification bio-fuel production causes. Over the past year the same institutions promoting bio-fuels began warning that bio-fuels contribute to the globally rising cost of food. Communities affected by bio fuel plantation know that the environmental destruction they cause must contribute to global warming rather then help combat it, not to mention increasing hunger.

CUCs National Committee member Aparicio Perez has also been directly affected by violence from the bio fuel industry as his home community of La Ayuda, Coatepeque is being devastated by the contamination and desertification caused by neighboring African Palm plantations, and as a consequence of their protests he has been subject to death threats. On March 20, 2008 his two sons were pursued by a pick up truck with tinted windows in an apparent attempt to attack them.

ON July 7 a member of CUC in their Coatepeque region was gunned down and killed in a public mini bus, a public assassination that demonstrates the degree of impunity and violence in the area which leave activists vulnerable.

CUC is a long time partner of Rights Action, it is one of the longest standing land rights organizations in Guatemala, and has maintained a clear and constant struggle for the respect for fundamental human rights for over three decades. Rigoberta Menchu won the Nobel Peace Prize while working as a member of CUC.

Aparicio Perez has traveled to the United States twice with Rights Action, first in a speaking tour focused on denouncing the killings of land rights activists in Eastern Guatemala and most recently to attend the United States Social Forum. Both Aparicio Perez and Rafael Gonzales have been active in planning for the Hemispheric Social Forum scheduled to occur in Guatemala in October 2008.

I am extremely concerned that the Inter American Development Bank is supporting the development of biofuel industry in Guatemala when the communities affected by bio fuel agro business are under attack, literally, by biofuel agribusinesses. The Guatemalan government permits these businesses to perpetrate violence and contaminate and steal water form the communities.

Example of this is the June 30 attack on the Maya Keqchi communities of La Isla, Caserio el Mirador Semao, Corazon de Mais, and Teleman Punto 15, in Panzos by paramilitary security forces associated with Ingenio Guadelupe, and the violent attack on members of the national committee of the Comite de Unidad Campesino CUC, the following day.

Today, July 1, when various campesino communities gathered to protest in Teleman, Alta Verapaz, in protest of the ataque suffered June 30 in Finca El Recuerdo in which one member of CUC was injured, at about 9 am, , managers of the business Chabil Utzaj, SA, took out their guns and fired against campesinos and campesinas who were peaceful protesting in the exit from Teleman to Panzos.

The members of the security force for these men also fired and kidnaped two women members of the National Committee of CUC, Maria Martin Domingo and Fabiana Ortiz Sales. The women are detained in a house with a yellow wooden door located next to the gasoline station next to the Texaco in the exit of Teleman. They are currently attempting to capture Rafael Gonzales, Coordinator of CUC, and Aparicio Perez, both members of CUCs National Committee.

We call on national and international solidarity to pronounce on the acts.

Of the Farm Workers

Information about the Assasination of Balvino Chávez

He was assassinated today, Monday Duly 7, close to Caserio los Cerros, in the highway from Coatepeque to the Pacaya area, at 11:30 am. Our compañero was traveling from Coatepeque to San Vicente Pacayá in a collective transport minibus he owned. Two men that traveled on the minibus took out guns and killed him with gunshots, then fled. According to witnesses, he received 5 of the 10 bullets fired and two other people were injured, whose names we do not know, and they were transported tot he Coatepeque hospital.

Below we send photographs of the acts. CUC condemned the act in a direct interview in Despertar Occidental in which we asked the authorities to investigate this situation.