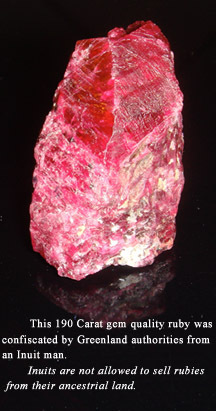 A group of five Inuit gemstone collectors in Greenland, who were banned from collecting or trading rubies from their traditional lands in 2007, are currently looking for international support in their peaceful struggle to regain their artisan mining rights.

They call themselves the 16th August Union — August 16th marking the day when the Greenland Bureau of Minerals and Petroleum (BMP), working in co-ordination with the Canadian Mining Company Truth North Gems (TNG), accused them of “stealing” rubies and banned them from ever again trading or collecting the gemstone.

This is despite the fact that Section 32 of the Mineral Resources Act of Greenland “protects” the Inuit’s right to mine and sell rubies.

“Before the 16th of August 2007, it was well-known and widely practiced that the native inhabitants of Greenland had the common right to hunt, fish and collect minerals anywhere they pleased on their island, as it was a tradition,” explains Niels Madsen, a Co-founder of the 16th August Union.

After the 16th, Greenland adopted an all too Canadian policy of greed and hostility, making the Inuit into criminals on their own land, and preventing any Greenlanders from collecting rubies unless they have a valid permit.

“Most importantly, we are circulating a petition in support of our cause. It is linked below. Already, in only three weeks, over 3500 Greenlanders, in a population of only 57,000 souls, have signed. In addition, another 1000 people internationally have signed out petition on line and in print.”

“We [are also seeking] funds to be used for a legal defense fund to protect the native rights of Inuit Greenlanders to access the ruby of Kalaallit Nunaat. We need pro-bono help.”

“This year, we will continue to harvest the ruby God gave us and create beautiful jewelry for sale and trade… We will [also] carry our message to the United Nations and to the world at large.”