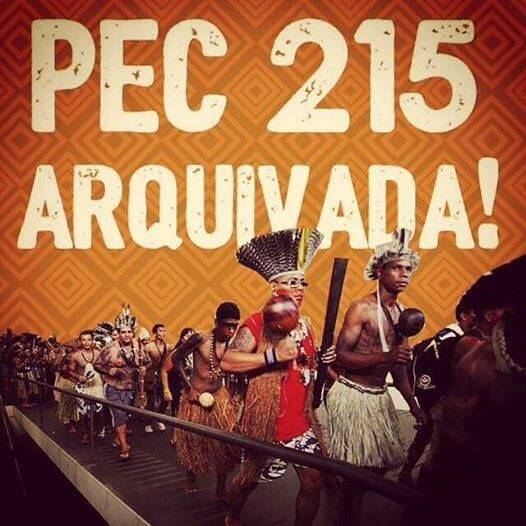 APIB
The following is an unofficial translation of a December 19 Open Letter by The Articulation of the Indigenous Peoples of Brazil (APIB). You can find the original letter in Portuguese at mobilizacaonacionalindigena.wordpress.com.

The Articulation of Indigenous Peoples of Brazil (APIB) and indigenous leaders mobilized in the week of Dec. 15-19 in opposition to the legislative aberrations of the suppression of indigenous rights, especially territorial, orchestrated mainly by the ruralist caucus of the National Congress. By means of this [letter, we] present our profound gratitude to all the men and women allied with the indigenous cause in Brazil and in all parts of the world – entities of indigenous advocacy, socioenvironmental and human rights, social movements and organizations, academic institutions, political parties, parliamentary and other initiatives, including individuals – who stood in solidarity with us and contributed in many different ways in the defense of our rights gravely threatened especially as this year ends.

The events this week, demonstrated that only struggle, mobilization and well articulated pressure makes it possible to prevent the forces of capital, of the hegemonic classes, of the apparatus of repression and of other state jurisdictions from imposing their will against the Democratic Rule of Law, the democratic regimen and the multiethnic and multicultural character of Brazil. The Indigenous Peoples demonstrated that they will never permit, including in sacrifice of one’s own life, the recolonization, usurpation and plunder of their territories to be consummated, in favor of extractive industry, of agribusiness and of neo-developmentalism defended by the elites and the current government, and that favors only them and pursuit of profit, enrichment and excessive consumption of a few, descendants of invaders and of the authoritarian regime, representatives or accomplices of the large transnational corporations.

To render non-viable, this year, the PEC 215/2000 and PL S/N of Senator Romero Juca who sought to regulate Paragraph 6 of Article 231 of the Federal Constitution, and the PL 7735/2014, [to regulate] genetic heritage, certainly signified a battle won, transcendental, but we cannot forget that in 2015, with an even more conservative Congress, and with a government that continues to signal being on the side of the dominators, the challenges remain. This is sufficient reason to, in addition to showing our gratitude, call upon our peoples, organizations and leaders, and all of our allies to remain vigilant and to be prepared for major struggles, resolute in our spirituality and cosmovision, in defense of life, our dignity and our sacred right to land, for the good of our present and future generations, of Brazilian society and the entirety of humanity.

We ask of everyone, that we continue to be mobilized including for the definitive release of imprisoned indigenous leaders, accused unjustly of attempted homicide; because all of us, men and women, have been exercising the legitimate exercise of expression, struggling for a just cause, as recognized by the Judge of the Tribunal of the Jury of Brasilia who granted provisional liberty to the leaders Alessandro Miranda Marques/Terena, Cleriston Teles Sousa/Tupinambá and Itucuri Santos Santana/Pataxó.

The judge stated in her decision: “I verfy that those arrested cannot be held. It is necessary to record that what took place was in the context of the legitimate exercise of the right to demonstrate, of the freedom of expression, of the right of participation in the public sphere, of being integrated in the political deliberative process, central pillars of support of the Democratic Rule of Law … Those individuals affected sought to exercise the right of defense of their interests by means of demonstration, of the protest movement, of contesting a society that in their view, by means of their representatives, stood in opposition to them …”

For a truly democratic, just and plural state, we continue together united in defense of the Federal Constitution and the territorial rights of indigenous peoples, quilombolas, of other rural populations and of Mother Nature.