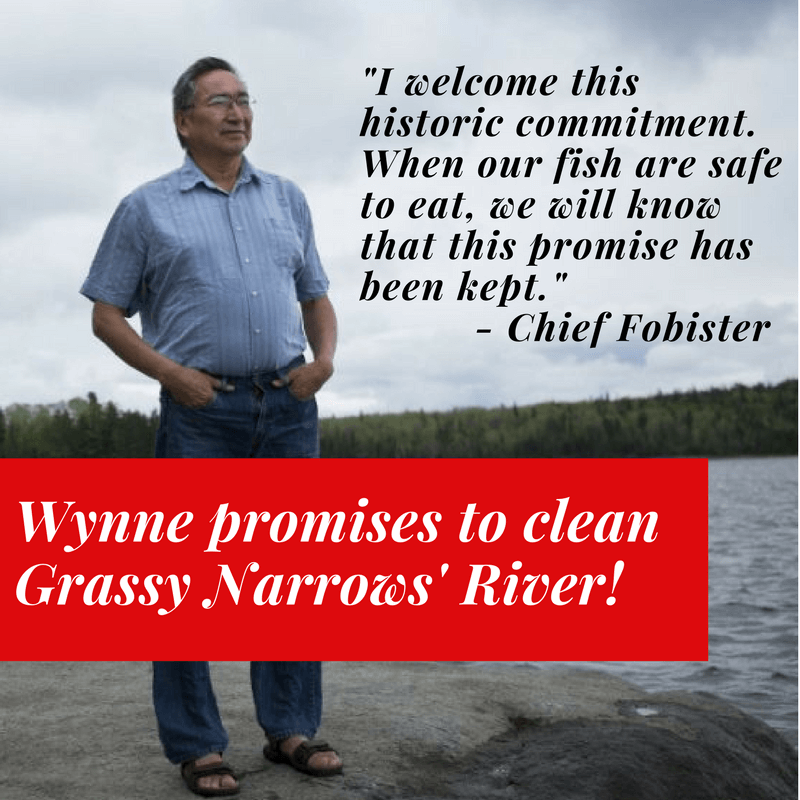 Premier Wynne promised to him that Ontario would clean up the English-Wabigoon River system and the Dryden Mill and that this cleanup would be led by Grassy Narrows First Nation!

Water has worn away the stone. After years of foot dragging, misleading, and back pedalling, Ontario has committed to do the right thing. This commitment is a direct result of sustained grassroots Indigenous resistance and ally support.

This is a moment for cautious celebration, but the work is not done. No schedule has been announced, and the remediation has not begun. Promises made before have been broken.

The clean up of the river, led by Grassy Narrows First Nation directly, is the first step. Grassy Narrows continues to call for a dignified Mercury Home for survivors in their community, a fair mercury compensation system, top quality health care, and a permanent Grassy Narrows environmental health monitoring station. Grassy Narrows is also calling for an end to planned clearcut logging on their homeland which would release more mercury into their lakes and rivers.

For over forty years (read brief history below), the people of Grassy Narrows have organized and fought for this commitment, and in the process they have become one of the lighting rods of Indigenous self-determination in Canada.  Grassy’s win today shows us yet again that justice on these territories will come through the leadership of grassroots Indigenous communities.

Chief Fobister has a message for us. “I thank the grassroots people of Grassy Narrows, and our supporters who have been tireless in their work to gain justice for mercury survivors at long last

Let us continue until Grassy Narrows and all Indigenous communities win justice.

PLEDGE YOUR SUPPORT TO GRASSY: http://bit.ly/GrassyPledge

A brief history of the struggle at Grassy Narrows