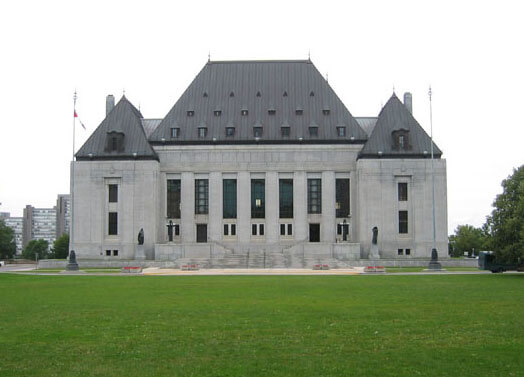 Supreme Court of Canada
Support our journalism. Become a Patron!

Today after 14 years of winding its way through the courts, the Supreme Court of Canada began hearing Grassy Narrows’ legal case (Keewatin v. MNR) for Treaty Rights and against industrial clearcut logging on their land.  This case will have significant implications both locally and nationally.

The Grassy Narrows First Nation (or Asubpeeschoseewagong First Nation as it is traditionally called in Anishinaabek) and its community members have been involved in the longest running indigenous blockade in Cananda for over 10 years; but as has been discussed before, the history of injustice, colonialism, and contempt for the community is much longer.

There is a long history of Grassy Narrows facing environmental colonialism where industry and government collude to pollute the lands and bodies of the people in the region.

As was pointed out in todays media release, “Scientific studies indicate that clearcut logging in boreal watersheds often raises mercury levels in fish above the World Health Organization’s advisable limit for human consumption. Recent clearcut logging in Grassy Narrows’ territory has likely deepened and prolonged the terrible impacts of mercury poison that began when a paper mill upstream in Dryden dumped 9,000 kg of mercury into Grassy Narrows’ river between 1962 and 1970.”

While this new forestry plan was scheduled to take effect in April 2014, it has been delayed after widespread opposition across Ontario and through the work of Grassy Narrows youth and Ontario Regional Chief Stan Beardy. 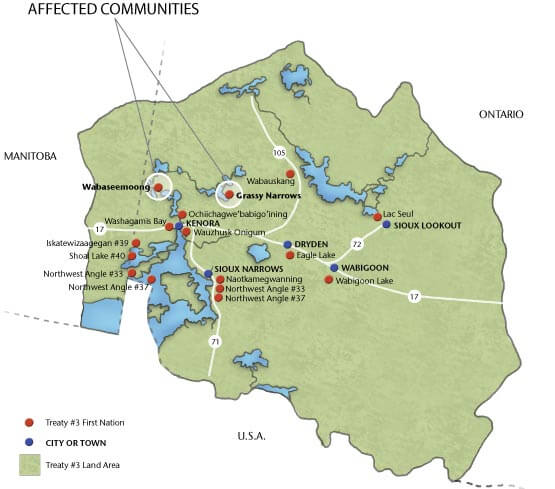 In response to the Ontario Government’s cavalier actions against Treaty Rights, in the 2011 ruling which was in favour of Grassy Narrows, Ontario Superior Court Justice Sanderson had harsh words for Ontario’s approach, “Ontario’s approach to this litigation, while pleasantly civil, was strongly adversarial. Always focusing on its own proprietary rights, it downplayed the plain and clear reference in the Harvesting Clause to Canada. It characterized as a “mistake” what I have found to be [the Treaty Commissioners’] deliberate attempt to protect the Harvesting Rights of the Ojibway…” Yet, on March 18, 2013 The Ontario Court of Appeal overturned Justice Sanderson’s ruling.

This outcome of this case will have significant effect on the people of Grassy Narrows. Many people are dependant on hunting and trapping after their fishery was poisoned with mercury. Clearcut logging has already negatively affected trapping lines and moose populations according locals and is further destroying the livelihoods of those who choose to live a traditional way of life. As Robert Janes stated, “what Grassy Narrows wants more than anything is to maintain its community … a protection of its traditional way of life and finding a way of building a local, sustainable economy.”

Secondly, this case will have implications regarding the duty to consult. In 2012, Kathleen Wynne visited Grassy Narrows saying she wanted to rebuild Grassy Narrows relationship with the province and ‘get it right’, but instead unilaterally decided to move ahead with the industrial clear cut logging plan without consent from the community.  Sadly, for this government they believe duty consult is a quick visit to glad hand and not respect the Treaty Rights of the people of Grassy Narrows. When I asked her during about this during a reddit AMA, she decided it was more important to answer some question like her favourite books, that she does not plan to run a marathon right now, and a few other talking points from the government website.

“The duty to consult” with First Nations on issues and projects that affect them and their lands is a legal requirement in Canada, “but they ignore the Constitution and legislation to consult with the legal holder of traditional lands,” Beardy said. “So if the logging starts up again, so will the blockage. Unfortunately, it seems to be the only way they’ll pay attention to us. We tried the political process, we tried having a conversation with them.”

Further, this case will have serious implications on the constitutional authority and limits of what the government of Ontario can do ‘taking up’ lands in the Keewatin area of Treaty 3. Grassy Narrows is justly arguing that the province does not have the power to put limitations on treaty rights; the promise in the treaty is that only Canada/The Crown can grant these authorizations. The Metis Nation of Ontario which is intervening in the case on Grassy Narrows side sums it stating,

“because this appeal will have broader implications with respect to Canada’s ongoing jurisdiction and responsibility to protect Treaty and Aboriginal rights under s. 91(24) of the Constitution Act, 1867. This constitutional provision grants the federal government exclusive legislative responsibility for “Indians, and Lands reserved for Indians.”

There are colossal implications at play here as the SCC decides if treaty promise are between ‘The Crown” in general, or the Federal Government. Almost all treaties contain ‘taking up’ clauses which allow the Crown to use treaty lands for various purposes (usually mining and exploitation of natural resources). Historically, the treaty promises between the Crown and First Nations were considered to have been made between the federal government and Aboriginal leaders. It was generally thought that only the federal government could “take up” lands. In the Keewatin case, the Ontario Court of Appeal held that the authority to ‘take up’ has to rest with the Crown that has the underlying title to the land – in this case, the provincial government. What the SCC says will have significance not only in Ontario but across other provinces. If the SCC holds that the provinces are allowed to take up lands, this will give them the benefit of a treaty promise without any of the fiduciary obligations that the federal government still holds (and is why the Harper government has been so silent on this case).