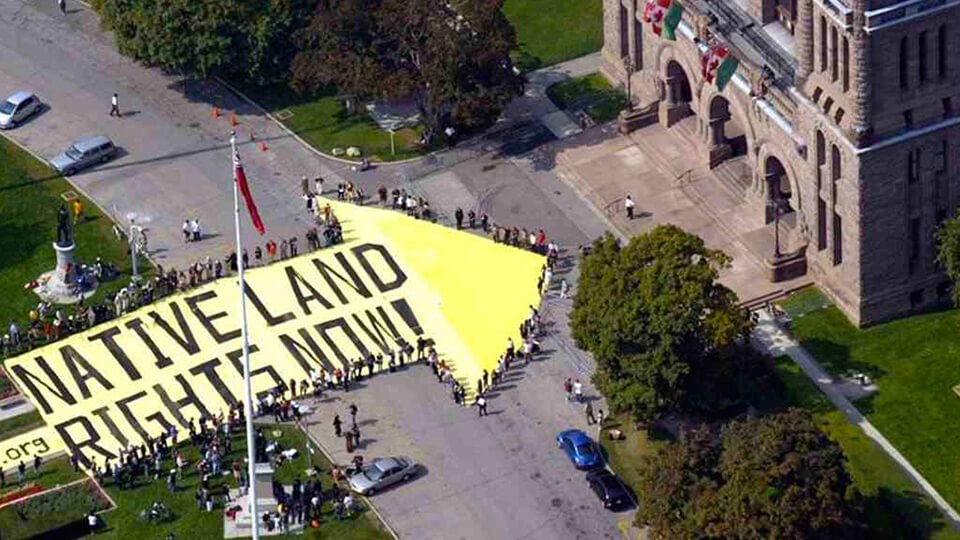 On July 31, members of the Grassy Narrows First Nation will head to the Ontario Legislative Building in Toronto and are calling on supporters to join them “in a walk for clean water and indigenous rights.” Two days before, on July 29, there will be a speaking event with Grassy Narrows Clan Mother Judy Da Silva, Grassy Narrows Chief Roger Fobister, writer and activist Leanne Simpson, and Stephen Lewis. Here’s why:

It is shocking that neither Canada nor the province of Ontario have recognized even one case of mercury poisoning in the 50 years since the province allowed 10 tonnes of mercury to be dumped into the Wabigoon River, which provides numerous communities with water and fish. It is even more shocking that this river has never been cleaned up and continues to provide these communities with water and fish.

In the U.S., the Environmental Protection Agency advise that any spill larger than 2 tablespoons of mercury should be reported to the state environmental agency, and it is mandatory to call the National Response Center. But just north of the border, tonnes of mercury can be put into river systems with little concern about cleanup, remediation and human health – apparently. Citizens of Grassy Narrows, however, can’t afford to ignore mercury contamination.

Grassy Narrows, or Asubpeechoseewagong in Anishnaabe, is located in Treaty 3 territory in northern Ontario. It is one of the communities still facing the impacts of the Dryden pulp and paper mill’s reckless disposal of mercury more than a half century after the spill.

A 2012 report found that mercury impacted the health of 59% of the 160 people examined in Grassy Narrows and White Dog First Nations, both of which are located downstream from the paper mill. Even among people between the ages of 21 and 41, 44% of those tested have experienced health impacts from mercury poisoning.

The dangers of mercury poisoning made international headlines from Minamata, Japan, after the Chisso Corporation released large quantities of industrial wastewater into the water supply of a community that relied heavily on fishing to support its economy and local diet. Entire families developed a neurological disorder that impacts muscular coordination and can cause birth defects, now known as Minamata disease.

Japan formally apologized for allowing mercury disposal to devastate community health and the local economy, and Chisso was forced to financially compensate residents suffering from the disease as well as local fishing cooperatives for their losses.

A legacy of abuse – and resistance

Members of Grassy Narrows and White dog have been demanding similar forms of compensation for those diagnosed with some level of Minamata disease. The Mercury Disability Board in Canada, however, rejected 75% of those applicants who were diagnosed with the disease by Japanese experts. While disappointing, this outcome is not surprising to a community with a long history of colonially imposed residential schools, dams and logging – known to exacerbate mercury contamination in water systems.

In the 1990s, the provincial government opened up the region’s forests – home to numerous Indigenous communities, including Grassy Narrows – to clear-cut logging. Logging drove away wildlife and impacted trappers’ ability to fish and hunt on their lands, traditional activities which are legally protected through Treaties.

In 2000, three Grassy Narrows trappers – Joseph Fobister, Andrew Keewatin and Willie Keewatin – took legal action against the Province for violating their Aboriginal Treaty Rights. Their case dragged on and the community saw it needed to take stronger action. So in 2002, First Nation members set up what was to become one of the longest Indigenous blockades in Canadian history.

Speaking tours, rallies, educational campaigns and petitions have all helped the community gain widespread support for its court case and blockade. In the meantime, Grassy Nations has successfully forced numerous companies to stay off its territory. Forestry giant Abitibi-Bowater surrendered its forestry license in 2008 and large-scale clear-cuts have stopped, for now. Domtar, the largest office paper producer in North America, and Boise Inc. have committed not to source wood from Grassy Narrows’ traditional territory. 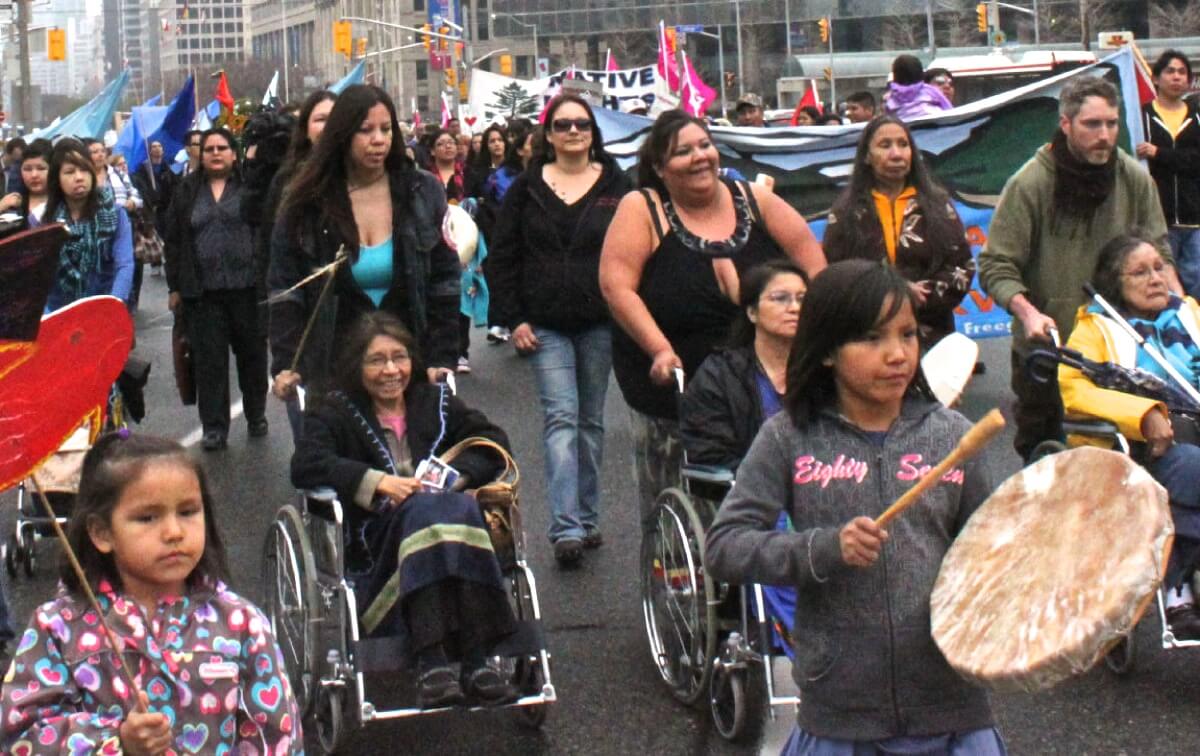 Fighting to Keep Their Forests

But the community’s fight is far from over. The high-profile case known as Keewatin v. Ontario (Natural Resources) was originally closed in 2011 when Ontario Superior Court Justice Sanderson ruled in favor of the community, saying that Aboriginal Treaty rights to hunt and trap supersede the Province’s rights to resources on the Nation’s land. But the Province has continued to develop a 10-year Management Plan for logging in the Whisky Jack Forest where Grassy Narrows is located, in disregard of the ruling.

Strange, right? Yes, but it also made the Province’s next move very clear.

Two years after what seemed like a “win” for Grassy Narrows in the courts, the Province of Ontario appealed the 2011 ruling, the Ontario Court of Appeal overturned it, and just last week the Supreme Court of Canada ruled in favor of Ontario. The Province now proceeds with its plans for another decade of clear-cut logging on Grassy Narrows Territory. What does that mean for Grassy?

It means the fight is once again heating up. Now that the case is out of the courts, members of the community have hit the streets. At the end of July, members of Grassy Narrows will take their demands for justice to the Provincial legislature for the 4th biannual River Run – an event in Toronto in which the community has held past speaking engagements alongside high-profile speakers like Lee Maracle, Maude Barlow, Judy Rebick and the late Dr. Masazumi Harada – a Japanese expert on Minamata Disease.

In 2012, the community held a traditional Fish Fry where they invited provincial politicians to taste some of the fish from the Wabigoon River – which, in case they needed a reminder, has yet to be cleaned up. Only two of the invited politicians attended the Fish Fry. One, Kathleen Wynn, then the Minister of Aboriginal Affairs, spoke with community members and said publicly that she would visit the community, promising to rebuild Ontario’s relationship with Grassy Narrows.

Now Kathleen Wynn is the Premier of the Province and Grassy Narrows is calling on her to cancel new plans for clear-cut logging on Grassy Narrows territory and to protect the water. The Premier is being given another opportunity to listen to the demands of the community – this time, with even more power and influence to change the Province’s role and take steps towards resolving the situation.

To get involved, lend support or find out more about Grassy Narrows and the upcoming River Run, visit here.