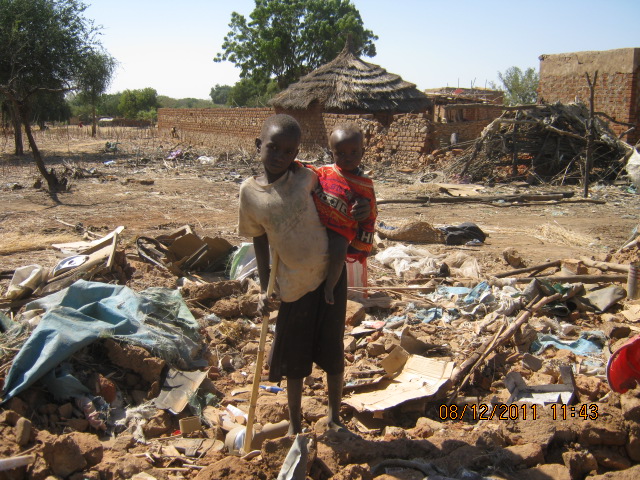 Government of Sudan Preparing for ‘Final Assault’ on Nuba People

The government of Sudan appears to be on the verge of a ‘final assault’ on Indigenous Africans in the Nuba Mountains of South Kordofan.

The U.S.-based Satellite Sentinel Project has released a series of images which seem to indicate that Sudanese Armed Forces (SAF) have surrounded the remaining local civilian population in the Nuba Mountains and closed off all existing evacuation routes used by Nuba refugees to flee constant aerial and artillery bombardments.

“In effect, they’re creating a kill box, cutting off the flow of refugees,” says Enough Project Director of Communications Jonathan Hutson. “They’re encircling the Nuba people of the Nuba Mountains, as part of an ethnic cleansing campaign.” 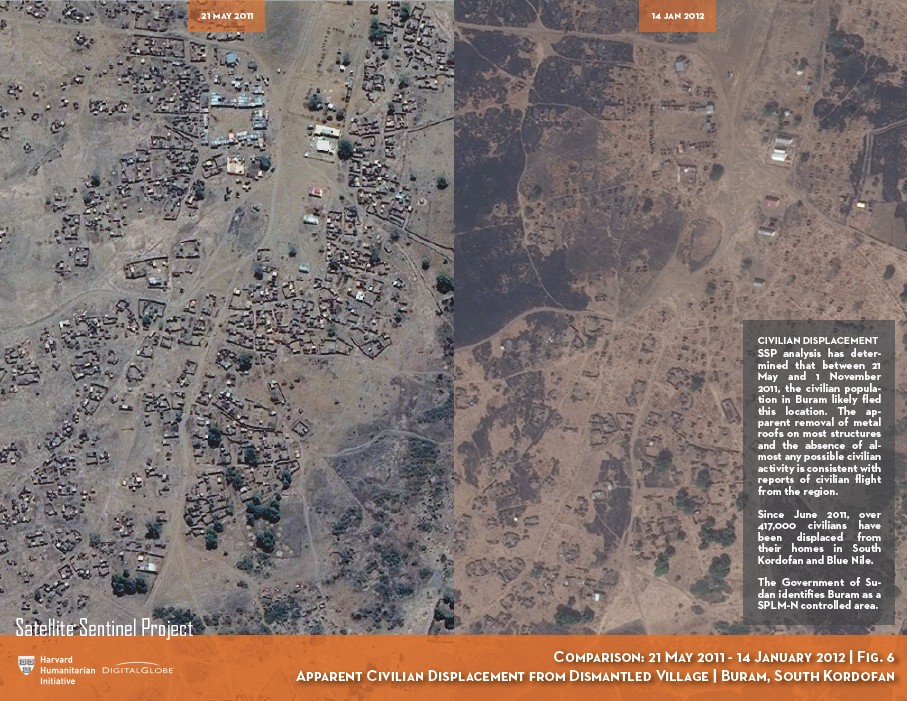 Apparent Civilian Displacement from Dismantled Village – Buram, South Kordofan. Map by Satellite Sentinel Project.“The disturbing pattern, indicated by satellite imagery analyzed by SSP, has been seen before,” states Harvard Carr Center Executive Director Charlie Clements, MD. “In the case of Abyei, the international community did not heed the warnings we issued six weeks in advance. The community of nations must not again fail to act while some 200,000 Nuba civilian lives are in danger.”

The Government of Sudan’s apparent effort to destroy all ethnic and religious differences in the region, which also happens to be rich in oil, has been taking place in full view of the international community for the better part of seven months. Even as the UN General Assembly admitted South Sudan into the United Nations in July 2011, the Nuba Peoples were already facing heavy casualties. Few seemed to notice what was happening; while others simply chose to ignore it.

A handful of NGOs have been working continuously in support of the Nuba Peoples who collectively speak more than 60 different languages. Those NGO’s include the Enough Project, Save the Nuba, and the Nuba Mountains Peace Coalition. 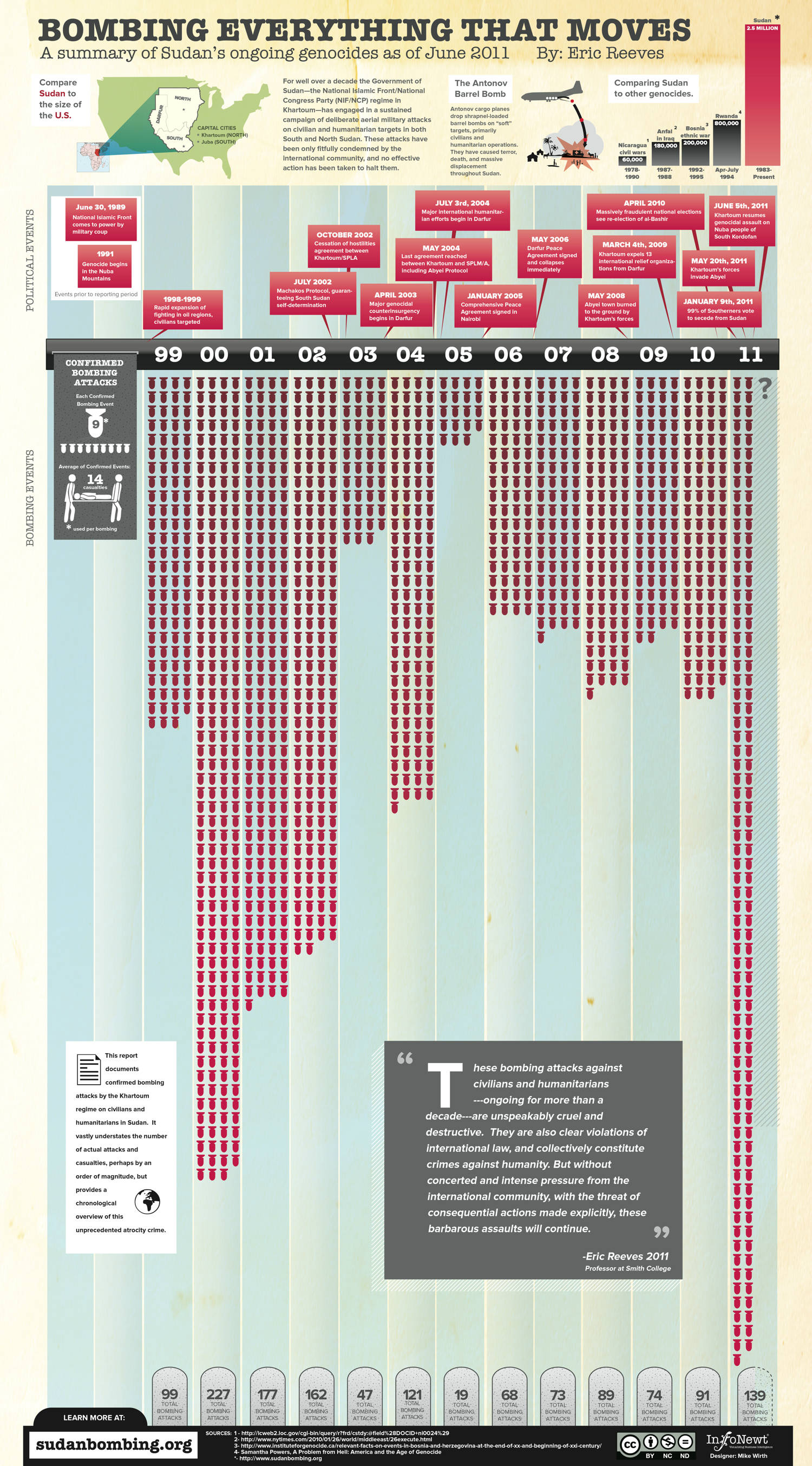 Inforgraphic: Bombing Everything That Moves (Summarizes Sudan’s ongoing genocides up to June 2011. Updates available at www.sudanbombing.orgThe Nuba People themselves are fearing the worst.

“We have a long history in Sudan; but we didn’t get our right in our own country when Sudan got Independence, so we began to fight for our rights. Now the government uses the air force to kill children, women, animals, and burn the land. Our children are crying and no one can hear them inside the dark caves,” a Nuba villager recently told Intercontinental Cry. “We are looking for help. People around the world don’t know much about us; we ask for way to show the world what is happening in nuba mountains.”

The current campaign against the Nuba Peoples began soon after South Sudan’s referendum on independence. The People of South Kordofan hoped to have their own referendum; but, as The Nuba Mountains Peace Coalition explains, “[they were] only granted a so-called ‘popular consultation’, which would [have] allow[ed] citizens to hold free elections and make their own choices regarding religion and human rights.”

Sudanese President Omar Al-Bashir–who has been accused of war crimes by the International Criminal Court–went back on his word. “[Now, they are] being methodically exterminated,” says the Nuba Mountains Peace Coalition. 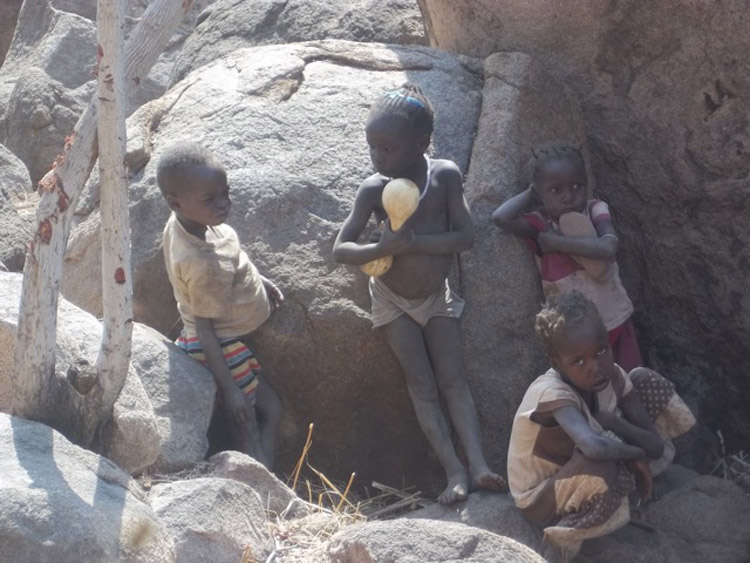 Nuba children displaced by SAF bombings on January 10, 2012. Photo by Tomo Križnar “The United States, together with the international community, must act swiftly to fulfill its responsibility to protect the Nuba people who are being bombarded, and starved, by their own government,” states Enough Project Executive Director John C. Bradshaw. “Sudan appears to be several weeks away from being able to launch a full-scale, final assault on the Kauda Valley and the surrounding area, where [the Nuba] are sheltering in caves, cut off from humanitarian aid. ”

Slovenian writer, documentary film maker and journalist Tomo Kriznar, who has been documenting atrocities in Sudan for more than a decade, warns that the indigenous peoples in the nearby province of Blue Nile are also being targeted by the government.

“The long process that started with Arabs hunting slaves and cutting trees for charcoal, turning forests into deserts, is now concluding with the latest bombardments of the last Africans out of the province. ‘There will be no tolerance towards leftist ethnic and religious groups in case the South declares independence,’ said Bashir in December of last year. It is a question of dignity and pride to fulfill this promise.” Furthermore, “The regime in Khartoum will do everything to stop foreigners from taking part of what was once the biggest African country and distributing it among themselves.”

“All it takes for evil to triumph is for good men to do nothing.” If there’s any truth to those famous words by Edmund Burke, then surely it’s time for the international community to step forward in support of the Nuba People.