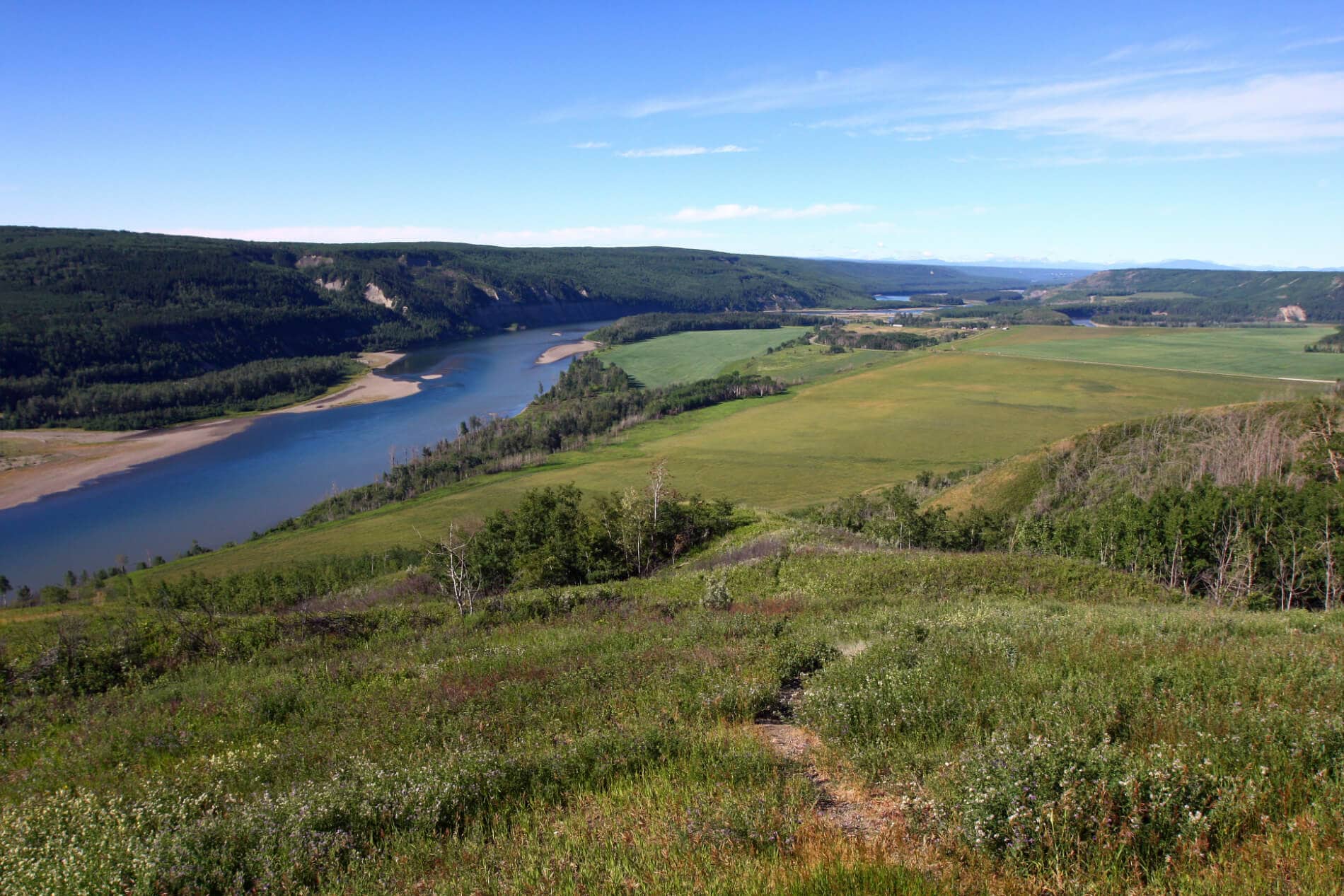 Construction of Site C dam, which threatens cultural heritage and traditional use in northeast BC’s Peace River Valley, continues despite objections from the United Nations. Photo by Amanda Follett Hosgood.
Support our journalism. Become a Patron!

Last month, a deadline bestowed upon Canada by the United Nations’ Committee on the Elimination of Racial Discrimination (CERD) quietly came and went.

It was, in fact, the second time the committee had requested that British Columbia suspend construction on Site C dam, which is currently underway in the province’s northeast, until First Nations concerns had been addressed. The first request, which came in 2017, was ignored.

In a Dec. 14 letter, CERD chair Noureddine Amir expressed concern that continued work on the controversial hydro dam “permanently affects the land rights of affected indigenous peoples in the Province of British Columbia.” The letter requested a response before April 8.

According to the Union of BC Indian Chiefs (UBCIC), Canada responded to some of the initial CERD recommendations, but not those regarding Site C.

“They have not responded since missing the April 8 deadline,” UBCIC said in an emailed statement, adding that the chiefs would continue to press Canada to comply with the recommendations with respect to Site C and continue to engage with CERD on the issue.

A spokesperson with Canadian Heritage said the department is currently working with both the federal and provincial governments to prepare a response, which is expected to be submitted to the United Nations in the coming weeks.

When questioned about the province’s response to the letter, Sarah Plank, communications director with BC’s Ministry of Indigenous Relations and Reconciliation, directed Culturally Modified to the Government of Canada. Canadian UN representative Rosemary McCarney, to whom the letter was addressed, was unavailable for comment.

In March, at a feast held on Wet’suwet’en territory in northern BC, Premier John Horgan promised to table legislation this fall that would give meaning to Indigenous rights laid out in the UN Declaration on the Rights of Indigenous Peoples (UNDRIP).

“I have a unique opportunity as the premier of British Columbia to work with you to find a path forward,” he said.

It’s questionable how the province intends to implement UNDRIP, which emphasizes the “free, prior and informed consent” of Indigenous Peoples on issues affecting them, as pipeline construction expressly opposed by hereditary chiefs continues on Wet’suwet’en territory and valuable cultural heritage is being lost in the Peace Region where Site C dam construction is currently underway.

It’s questionable how the province intends to implement UNDRIP (as) valuable cultural heritage is being lost in the Peace Region where Site C dam construction is currently underway.

“It has largely been full steam ahead, except for the fact there have been some slowdowns and delays created by the ongoing problems they have with the geology of the landscape,” Craig Benjamin, a campaigner for the human rights of Indigenous Peoples with Amnesty International Canada, said about dam preparation, which continues after the West Moberly First Nations was denied an interim injunction while its case against treaty infringements is being heard by the BC Supreme Court.

“It means that critical areas that are in the path of preparation for dam building will not be protected,” Benjamin said, including grave sites, habitat and ceremonial areas essential to West Moberly’s traditional culture. “I was there one day. You couldn’t put a shovel in the ground without coming up with an artifact.”

He adds that the nature of the Peace River Valley, a low passage through the Rockies at a high latitude, creates a “critical west-east flow” of warm air from the Pacific, making it unique for both wildlife and agriculture. As a result, the area has “supported a continuity of civilization in the valley that’s extraordinarily rare,” with evidence of continuous use dating back at least 10,000 years, he says.

Although he began his work with Treaty 8 First Nations expecting the job to be a simple show of support, Benjamin says it has instead become a major global campaign for the international human rights organization.

“I have a lot of years in this work and I am not naïve and this honestly shocks me. Because it’s not even the scope and scale of the environmental destruction, it’s just that it is such a blatant violation of Indigenous rights,” he says.

The International Convention on the Elimination of All Forms of Racial Discrimination is currently underway and continues until May 10 in Geneva. It remains to be seen whether Site C will be addressed at the convention.

With files from Paul Henderson.

This article was originally published by Culturally Modified. It has been re-published at IC with permission.