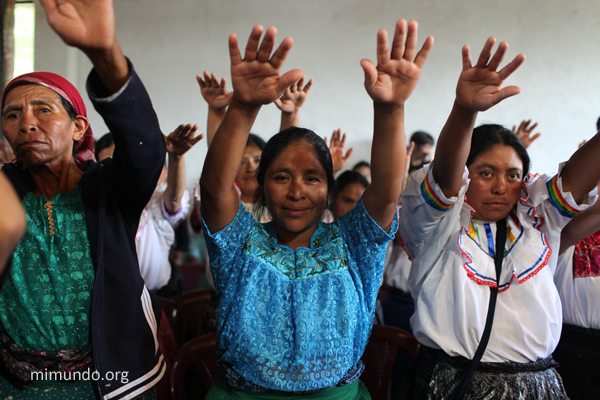 Judges at The Peoples’ International Health Tribunal have delivered their verdict on the case of Goldcorp’s mining operations in Carrizalillo in Guerrero, Mexico, Siria Valley in Francisco Morazan, Honduras, and San Miguel and Sipacapa in San Marcos, Guatemala.

After hearing hours of testimony from affected community members about the negative social, physical, psychological and environmental impacts of Goldcorp’s mining operations, the distinguished panel of judges found Goldcorp Guilty in all three countries.

You can read the final verdict here.

Below, a press release from The Peoples’ International Health Tribunal

The Peoples’ International Health Tribunal came to a close today shortly after the reading of the judge’s final deliberation. The panel summarized the facts of the case against Goldcorp that they had heard in the previous day of testimonies regarding health issues, heightened birth defects, the contamination of the environment and lack of consent, as well as the psychological impacts of community division and the criminalization of dissent and the collective health of the community regarding issues such as addiction, an increase in sexually transmitted diseases and gender violence.

The distinguished panel delivered a guilty verdict to Goldcorp, the host countries of Honduras, Guatemala, and Mexico, as well as the Canadian Government for supporting and promoting in various ways the irresponsible mining investments in Mesoamerica.

For the reasons above described, we find Goldcorp guilty for its activities in Honduras, Guatemala and Mexico, which we find to be seriously damaging to the health and the quality of life, the quality of environment, and the right to self determination of the affected Indigenous and campesino communities.

Following the verdict, the judges read recommendations to the communities and demands of Goldcorp and of the States (national, departmental, state and municipal governments).

Read a full (rough) transcript of the Tribunal here.

For interviews, please get in touch with our media contacts.