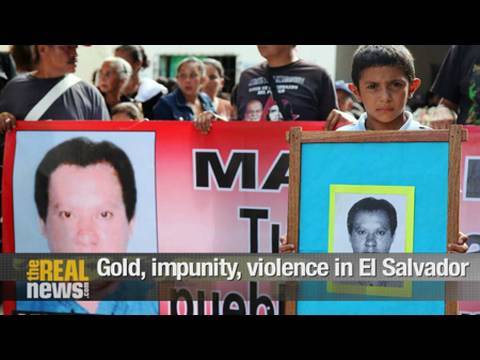 A new campaign of violence has emerged in El Salvador, with community activists in the struggle against a Canadian mining company suffering attacks, kidnappings, death threats, and outright murder. the Real News Network reports.

Over the past month and a half, with the region’s attention fixed on the coup in Honduras, a campaign of violence and fear has intensified in El Salvador, shedding light on the culture of impunity that persists in much of Central America.

The events have been centred in the northern state of Cabañas, which shares more than just a border with southern Honduras: the people on both sides live on top of the Central American gold vein, where Canadian mining companies have claims on the metal beneath.

Full transcript of Gold, impunity, violence in El Salvador is available at therealnews.com

Join the international community and call on the government of El Salvador to carry out a full investigation of all the attacks and the motives behind them. (Sample letter is available here)

Send an email to: