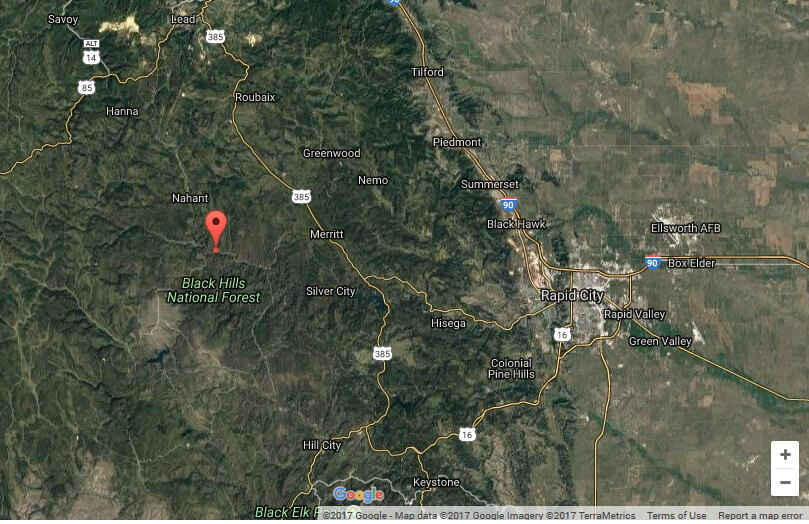 Location of the town of Rochford in South Dakota. Image: Google Maps
Support our journalism. Become a Patron!

ROCHFORD — Gold fever is back in the Black Hills. A Canadian company is telling investors they can strike it rich with the likes of “another Homestake Mine”, and the U.S. government is asking for public comment on admitting prospectors.

Vancouver, British Columbia-based Mineral Mountain Resources Ltd. proposes to conduct diamond drilling exploration of mining claims it says it has acquired on some 7,500 acres of private land, as well as on publicly administered properties. Comments are due in to the U.S. Forest Service by Oct. 27 on the Rochford Gold Project.

The company stresses the groundbreaking nature of the endeavor, which would commence at the historic Standby and Cochrane mines southeast of Rochford and northwest of the Lakota spiritual center of Pe’ Sla.

The project “represents the first time in the history of the Rochford District that one company controls the majority of the district and the first time virtually all of the … historical drilling and surface exploration data has been assembled in modern 3D and GIS formats, to facilitate district-scale interpretation and drill targeting,” it says in its literature.

It likens the prospects for the district to those of the lucrative Homestake Mine, located 15 miles to the north in Lead. Homestake produced more than 40 million Troy ounces of gold during its 125 years of continuous operation ending in 2001.

The oldest, largest and deepest mine in the Western Hemisphere until then, Homestake made its fortune and fame from an 1876 claim that was part of the gold rush ensuing the illegal taking of the Black Hills from the Great Sioux Nation, a violation of the 1868 Ft. Laramie Treaty.

Due to all the years of gold mining since then, Mineral Mountain Resources Ltd. says it considers the Black Hills ripe for its 10-year mining proposal.

It terms the project “de-risked” because the “Black Hills is pro-mining.” Evidence it presents includes Coeur Mining Inc.’s open-pit and heap-leach operations at nearby Wharf Mine, South Dakota’s only working gold mine.

It expects “robust results” from mining even by its most conservative calculations, predicting a layout of less than $920 and a payback of $1,300 per Troy ounce.

Some local groups are banding together to contest the project, however. They consider it risky and counter to Lakota culture.

The Homestake Mine polluted Whitewood Creek, and Brohm Mining Co.’s nearby Gilt Edge Mine polluted Strawberry Creek and Bear Butte Creek, with both gold mines leaving taxpayers to foot the bill for multi-million-dollar Superfund toxic cleanup sites, the groups point out.

“We don’t want to see another gold mining tragedy in the Black Hills, and that’s what we would probably get if this project goes forward,” said Lilias Jarding, Ph.D., founder of Clean Water Alliance.

The Rapid City-based organization, together with the Black Hills Chapter of the statewide Dakota Rural Action and another group, Save Rochford and Rapid Creek, came out with a statement against the gold exploration drilling on Oct. 19.

“The Black Hills’ main economic drivers are agriculture and tourism. The area is home to one of the most sacred Lakota sites. A gold mine doesn’t fit there,” Jarding said.

Some of the drilling would take place in the area of Reynolds Prairie, a high mountain meadowland known in Lakota as Pe’ Sla, or the “Heart of Everything” central to the Oceti Sakowin traditional star knowledge and understanding of the universe.

Carol Hayse, a member of Save Rochford and Rapid Creek, called the project “foolhardy” and lacking assessment of “possible impacts on nearby land sacred to Native Americans.”

The South Dakota Department of Environment and Natural Resources has placed specific restrictions on the state drilling permit for the part of the project on private land.

“Mineral Mountain shall avoid any bones, artifacts, foundation remains, or other evidence of previously unrecorded past human use during exploration activities,” the agency said. If any appear during exploration, the restrictions dictate: “Activities shall be temporarily halted and the state archaeologist notified at once.”

To comply, the company pledges in its permit application for the part of the project on public land: “If undiscovered cultural resources are found during program implementation and activity, then Mineral Mountain will cease operations at the location and notify the Forest Service and the South Dakota state archeologist.”

The Mystic Ranger District of the Black Hills National Forest is in charge of permitting drilling locations on public lands, which would take up a total of two acres of surface in an approximately 10-square-mile area.

Hayse said members of her group are “concerned that the Forest Service has not done an environmental impact statement.” It is just now conducting a scoping comment period on the company’s plan of operations for exploration.

Black Hills National Forest Supervisor Mark Van Every has extended the deadline for scoping comments twice “in response to public interest and request.” The agency will review and rule on the comments following the latest 15-day extension.

Hayse said damage to local roads and trails is “certain,” adding, “Wildlife habitat could be compromised, and tourism may be diminished. Pollution of the water used to drill is likely.”

Van Every said the Forest Service decision “will include mitigation measures to protect wildlife, water and other resources, as well as to minimize noise or other disturbances associated with this action.”

But Prairie Hills Audubon Society President Nancy Hilding warns that comments to the Forest Service should include a demand for releasing an environmental study on the exploration to the public for comments before that decision is made, because “this exploration may lead to a large mine in the area.”

Save Rochford and Rapid Creek recommends comments to the Forest Service include a request for requiring a full environmental impact statement process to the exploration application.

The exploration could mean drilling as many as 120 holes up to 5,000 feet deep at 12 different sites on private land and an unspecified number of additional holes at 21 more sites on public land near scenic Castle Peak and recreational facilities, including the Michelson Trail.

Proponents say they may need to reopen closed roads and build approximately 3,000 feet of new trails for their drill rigs, pickups, all-terrain vehicles, excavators and loaders to access all the sites under Forest Service administration.

The sites would be about 1,000 square feet each and would be drilled continuously for 24 hours a day during a three-month period.

The new drilling would use the waters of Rapid Creek and Castle Creek located within the claim boundaries.

Mineral Mountain Resources Ltd. anticipates water usage of 5,000 to 10,000 gallons daily and says, “In the event that difficult drilling conditions are encountered, up to 20,000 gallons per day may be used on occasion.”

The maximum amount of water used for the duration of the project on public land is 1.8 million gallons, it says. The company has a temporary state water rights permit to withdraw that amount. The permit expires Dec. 31.

Save Rochford and Rapid Creek is urging citizens to ask the state not to renew that permit. The group claims the company would need another 1.8-million gallons for the operations on private land. However, the same permit could be used for both portions.

Dakota Rural Action Black Hills Chapter member Gena Parkhurst said, “Everyone who gets water from Rapid Creek, which includes Rapid City, should be concerned about this proposal.”

Hayse called it “puzzling” that “a foreign company can pull 1.8 million gallons of water from Rapid Creek and Castle Creek, and use it for nearly free, while Rapid City residents are seeing their water bills rise significantly.”

When the company drilled at its Holy Terror Project in Keystone, it broke its agreement with the city and polluted Battle Creek, opponents recalled. Operators had to pay a state fine for illegally dumping drilling fluids into the creek. The discharge was due to a leak of bentonite slurry from a mud pit associated with exploration activities.

The South Dakota Department of Environment and Natural Resources has placed specific restrictions on the state drilling permit for the part of the project on private land. They demand no release of water or sediments into Rapid Creek or tributaries unless a surface water discharge permit is obtained.

“When drilling fluids are used and/or when ground water is encountered during drilling, the drilling fluids shall be sufficiently contained to prevent overland flow or discharge to any waters of the state,” the restrictions say. The state requires the company to notify it within 90 days if drilling penetrates an aquifer.

Opponents complain that 76 percent of modern gold mines pollute water, “and the ones that don’t are in deserts where there is no water.”

Their groups’ research on Mineral Mountain Resources Ltd. shows that the company reported liabilities greater than its cash position on its most recent financial statements. The company has been required to post the maximum state reclamation bond of $20,000.

The Forest Service could impose an additional bond prior to initiating actions.

Comments can be written within the text of emails or attached. Comments submitted, including names and addresses of commenters, are public information. For details on this project, contact Gary Haag at (605) 673- 9200 or Jessica Eggers at (605) 343-1567.