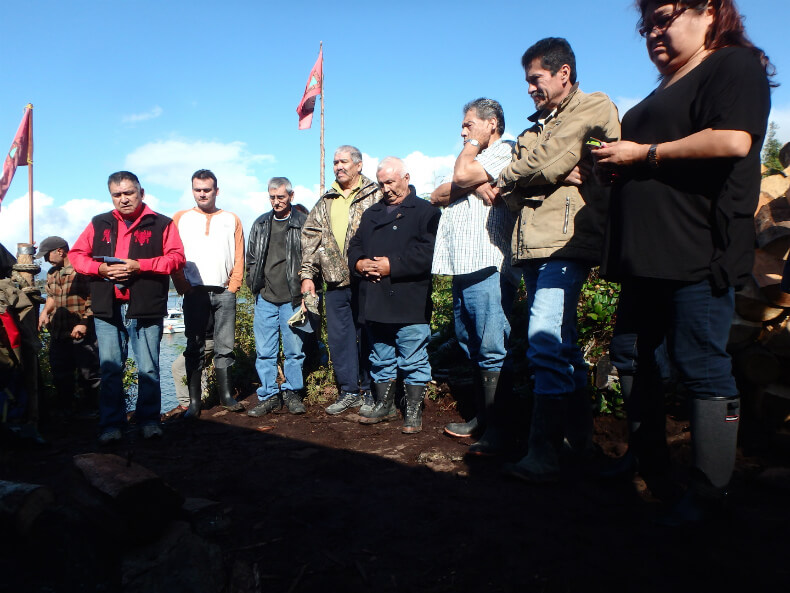 Gitxsan Hereditary Chiefs are in support of Lax Kw’alaams Hereditary Chiefs occupation of their traditional Lax Eula (Lelu Island) territory that is also proposed as the site of the Petronas (Pacific Northwest LNG) plant. Construction and operation of the proposed LNG plant on Lax Eula along with the marine terminal and landfall of the Prince Rupert Gas pipeline will destroy wild Skeena River salmon runs.

“We are standing together with the Chiefs on Lelu Island in opposition to the same LNG project. Our Madii Lii territory is on the pipeline route, and their Lelu Island territory is on the terminal site. We have both said no. This project threatens the salmon that all Skeena River and North Coast people depend on, and we thank the Yahaan (Don Wesley) and other Tsimshian Chiefs for what they are doing for all of us,” said Gitxsan Hereditary Chief Luutkudziiwus (Charlie Wright).

“We are taking the government to court over the lack of consultation, the inadequate baseline information presented, the weak and subjective impact assessment, the current cumulative effects from past development, and the massive infringement of our Aboriginal rights. People are now on the ground blocking the Petronas project from the coast to far inland,” said Madii Lii spokesperson Richard Wright.

“Luutkudziiwus wants BC government to respect our constitutionally protected Aboriginal rights with a realistic reconciliation process that honors healthy families and increases community health and education. Development within our traditional territories must have our Free, Prior and Informed Consent and a stop to the tearing apart of our communities” says Luutkudziiwus spokesperson Pansy Wright.

Despite First Nation concerns and opposition to the $40 billion Petronas led project, the provincial and federal governments have not honored their First Nations obligations. The proposed Petronas project includes over 6,200 fracking wells, the 300 km North Montney Mainline pipeline, the 900 km Prince Rupert Gas Transmission pipeline, and the Pacific Northwest LNG plant and terminal.

Luutkudziiwus are currently raising funds for legal costs through RAVEN Trust in preparation to file a judicial review of the provincial regulatory approvals regarding the proposed PRGT pipeline proposed crossing Madii Lii territory.