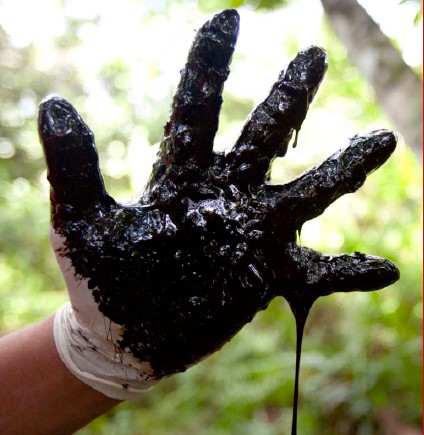 From Ecuador to Nigeria to the Gulf of Mexico

Oil industry sycophants, with their dollar store logic, are quick to tell us that oil spills are one of those ‘unfortunate facts of life’, like taxes in a market economy or Geraldo Rivera becoming a journalist.

They’re tragedies that we’re just supposed to live with, they tell us. After all, ‘We’re only human. We all mistakes’.

Maybe it’s enough to explain a couple oil spills—like the one by that guy who ‘accidentally’ dropped his bucket into an open sewer—But, of course, we’re talking about far more than one or two.

In the United States alone, roughly 20,000 oil spills were recorded between 2000-2008, totalling some 4 million gallons.

If we widen the scope a bit, we also find Texaco’s oil adventures in the Ecuadorian Amazon.

Over the course of 30 years, until 1990, the company permitted more than 19 billion gallons of toxic oil wastewater and 17 million gallons of crude oil to leach into the environment. It’s by far the largest oil disaster in the world.

Indigenous Peoples in the region have been literally devastated by the oil. According to the campaign group ChevronToxico , they now suffer from an “exploding public health crisis” that includes skin rashes, breathing problems, spontaneous abortions, birth defects and several different types of cancer. All of this was unheard of before the company arrived in 1964.

Since then, notes the Amazon Defense coalition, “more than 1,400 people have died of cancer.”

A number of studies have been published that confirm the health impacts; however, the company, which is now owned by Chevron, has routinely claimed that it’s all in their heads. They simply say that “[the] operations have not had a negative impact on human health.”

We can find similar claims and statistics in the oil-rich region of the the Niger Delta, where Shell and other companies have operated with impunity for decades.

On top of the human rights abuses, Shell has an appalling environmental record in the Niger Delta. According to one 2006 report by the World Conservation Union, WWF UK, and representatives from the Nigerian federal government and the Nigerian Conservation Foundation, reports the Guardian, they have contributed to as much as “1.5m tons of oil – 50 times the pollution unleashed in the Exxon Valdez tanker disaster in Alaska – has been spilled in the delta over the past half century.” About 40 percent of the oil that actually gets out of the delta, goes directly to the United States.

And that brings us to British Petroleum’s (BP) systemic negligence; which perfectly mirrors that of Chevron in Ecuador and Shell in Nigeria.

The Latest estimates suggest as much as 182 million gallons of oil have been released in to the Gulf, but the grand total could be far, far greater.

It will be some time before we see the full impact in the Gulf; although, Amazon Watch and the Rainforest Action Network recently helped us get a small taste of what lies ahead. Two weeks ago, they helped organize a solidarity exchange between indigenous people from Ecuador and the United Houma Nation which lives along the marshland of southeastern Louisiana.

During their stay, the delegation from Ecuador toured the affected region along the coast and sat down with the Houma Nation to offer some advice and their support.

Whether we’re talking about Exxon in Alaska, Shell in Nigeria, Chevron in Ecuador, or BP in the Gulf of Mexico, it’s safe to say that oil spills are indeed one of those ‘unfortunate facts of life’.

But we’re not talking about your life or mine. Rather, it’s the life of industry and the culture behind it that encourages companies to disregard real life and do absolutely anything so long as they can keep a smile on happy shareholder faces.

Anything else is an infringement, an obstacle, a petty nuisance. A pool of waste.