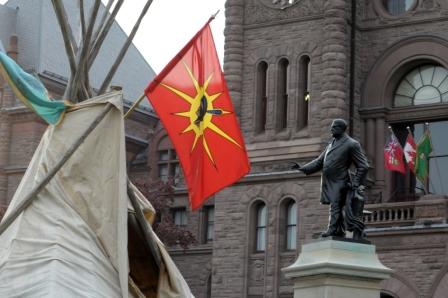 Free at Last! KI6 and Bob Lovelace Prevail In Court

Robert Lovelace of the Ardoch Algonquins and the group known as the KI6 were unconditionally released by Ontario’s Court of Appeal yesterday. The overcrowded courtroom burst into applause when the judges read their decision.

Quoting from the Canadian Press:

“It feels really good. It feels like justice is on our side,” said Bob Lovelace on the front steps of the courthouse, after being released from custody.

“I think I’m going to go out and put my feet in the grass. It’s been a long time.”

The eastern Ontario aboriginal leader was jailed in February for breaching an injunction that allowed Frontenac Ventures to conduct uranium exploration activities on his community’s traditional territory unhindered.

While the ruling does nothing to resolve the dispute, Lovelace said he hoped this “exercise” would prompt the Ontario government to engage in “meaningful” discussion and consultation on the matter which ultimately comes down to an archaic Mining Act that allows companies to stake land anywhere they like.

But Lovelace cautioned he must “continue to protect our land,” meaning he may be forced to occupy the disputed territory again if the company decides to proceed with exploration activities – a situation that could land him back in jail.

The court also decided six leaders from Kitchenuhmaykoosib Inninuwug (KI) First Nation had served enough time and ought to maintain their freedom.

They had breached a similar injunction involving the company Platinex Inc., which sought to drill on their land some 600 kilometres north of Thunder Bay, Ont.

For more, I turn to some great commentary by ACTUP, on www.kifriends.org:

In an act that may go some way to restoring confidence in the ‘whiteman’s courts’ the Ontario Court of Appeal released Bob Lovelace and the KI6 with written reasons to follow.

Those written reasons may be some of the most interesting words put to paper by a court on the idea of aboriginal reconciliation and the public interest.

Those fortunate enough to have seats in the postage stamp courtroom witnessed the complete meltdown of Ontario’s senior legal counsel in todays proceedings at the court of appeal. The Crown was unable to explain to the Court’s satisfaction how fines that hurt could be part of reconciliation. Legal insiders were praying that a giant hook or a gong would simply get her off the stage.

To say that the Crown was unprepared would be charitable. Heads should roll for this fiasco. Those former valedictorians and Harvard Kreskins who staff MAA and the AG were justly hoisted on their own petard.

Thinking back to the smug backslapping atmosphere in the Thunder Bay courtroom, with Owen and Neil exchanging knowing winks and smiles while rolling their eyes it was great to see the dynamic duo finally get their just desserts.

The Platinex move to dump KI while keeping their guns on Ardoch was a predictable trick that failed. Good work by Chris [the lawyer for both Lovelace the the KI6] in keeping these issues joined.

Thinking back, it seems to me that we got to this point because of a systemic failure. Ontario could not see beyond its role as an advocate of mining. Platinex could not see beyond gaining access to their “property” at any price. And the judge failed in his responsibility as judge to move beyond the stark dichotomy of fines or incarceration. KIs former lawyers OKT had run out of ideas and were left with simply a dramatic exit, a lot of fees and a bad haircut.

Maybe all the parties were simply exhausted. Justice Smith, who showed wisdom and courage in his first injunction decision, simply could not find a way to turn his mind to a nuanced remedy that would be in the ever elusive public interest. And certainly no one was providing him any options.

To be blunt, just because contemnors come before you requesting jail doesn’t mean you grant their wishes. Judges have a higher responsibility. Jail only served to weaken an already weak first nation faith in the courts. How Justice Smith imagined 6 months in jail would create a solution to the intractable problem he faced is beyond me.

Let’s hope that Justice Smith’s vacation time in South Africa is restorative. An earlier trip may have helped clarify his thinking on reconciliation.

Everybody knows that the jail sentence solved nothing. Platinex claims and leases remain in good standing and technically they could try to access their property. Let’s hope the Court of Appeal offers us some thinking on a solution that leads away from future contempts.

The real heroes in this story remain the communities of Ardoch and KI and the courageous individuals who became prisoners of conscience.

KI and Bob Lovelace animated a mass movement of unlikely allies.Amnesty, CPT, the unions, the powerfully animated Judy Rebick and the ENGO community.

There are some unsung heroes. I’ll just mention them by their first names. Luke, Eno C., Alvin, Kim, Jackie, Odi, Leah, Vernon, Justin, Joan, Wendy C., Jim R. and David S. That’s my list. I’m sure you have yours.

Let’s celebrate. But the battle is not won. Hundreds of thousands of hectares of mining claims have been staked in Ontario’s far north. No First Nation has the right to say no. The MNDM bureacrats remain. And McGuinty and Bryant continue to occupy the pink palace.

This blog is offering a significant reward to the person or persons who stake mining claims on the summer cottages of the Premier and Minister Bryant.

Above photo (of the Unity Flag) taken by Evan Ferrari of Wildlands League at the Gathering of Mother Earth Protectors on May 26, 2008.