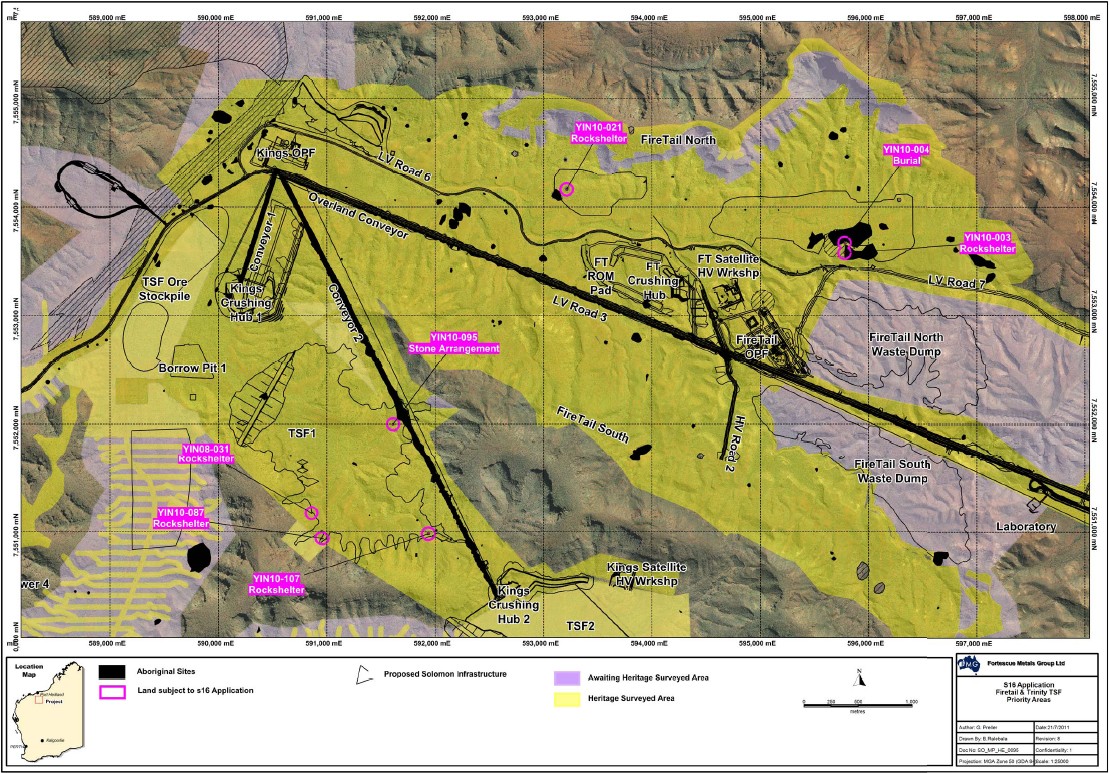 Fortescue Metals Group (FMG), a massive iron ore mining company based in Australia, is trying to get out of a state order forcing the company to protect any burial sites they encounter on Yindjibarndi country in Western Australia’s Pilbara region.

In June of this year, WA’s Indigenous Affairs Minister, Peter Collier, sent a four-page letter to FMG outlining nine special conditions for the company, including a requirement to stop work on their massive $8.5 billion Solomon Hub project if they encountered any human remains.

The letter warned that any failure to comply with the conditions could constitute an unlawful breach of the 1972 Aboriginal Heritage Act.

The minister’s letter also identified eight specific heritage sites that FMG should protect; however, that only represents a small fraction of the actual number of sites in Yindjibarndi country. “There are 250 or more in this country, some very important places for our religious ceremonies,” Michael Woodley, chief executive of the Yindjibarndi Aboriginal Corporation (YAC), told the Age.

Since receiving the Minister’s letter , FMG has uncovered three sets of skeletal remains, two of which were found in caves within the company’s “Firetail Priority Mining and Infrastructure” area.

FMG insists that the remains haven’t been moved and that they are protected by an exclusion zone, but now that could change. The company has approached the State government’s Administrative Appeals Tribunal to quash several of the Minister’s conditions.

2) “Prior to conducting the Purpose consult with representatives of the Yindjibarndi Aboriginal Corporation and the Wirlu-Murra Yindjibarndi Aboriginal Corporation, to the satisfaction of the Registrar, to clarify the status of heritage places on the Land and identify all heritage values associated with places on the Land”; and

3) “Prior to conducting the Purpose provide the Registrar with information on the location and archaeological and ethnographic assessments of all rockshelters and caves located on the Land which will include copies of all archaeological and anthropological reports over the Land”.

An apparently-sympathetic tribunal wasted no time responding to FMG’s request for the right to disturb the Yindjibarndi’s heritage sites. They formally asked the minister to reconsider his position. As of Oct 15, the tribunal is still waiting for the minister’s decision.

Saying that the company wants to disturb a few heritage sites here and there, is putting it mildly–especially if the Yindjibarndi have anything to say about it. Woodley told the Age that any disturbance, desecration or destruction of their ancestral remains could unleash dangerous forces into the world, and seriously harm those responsible. “We Yindjibarndis are in danger too, unless we protect our sacred sites,” he said. “If we fail, our Skygod will make us sick and kill us we believe.”

No doubt FMG’s having a good laugh over that one.