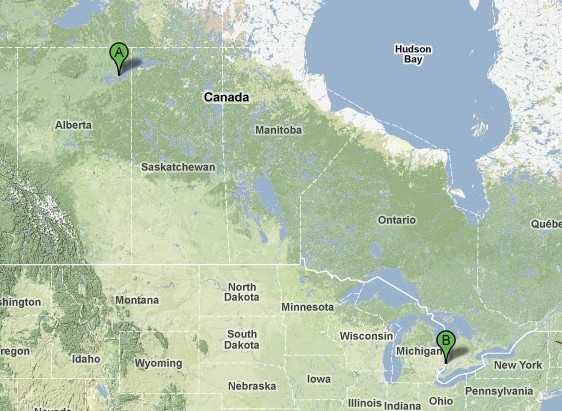 Fort Chipewyan And Aamjiwnaang Are One In The Same

In this article, George Poitras, a resident and former Chief of the Mikisew Cree Nation in Fort Chipewyan, Alberta, talks about his recent visit to the Aamjiwnaang Nation in southern Ontario and how the two indigenous communities, while separated by more than 2,600 kilometres, are ultimately one in the same.

Fort Chipewyan & Aamjiwnaang (The more we are the same)

FEBRUARY 21 – Canada’s Chemical Valley is not a likely destination that one has on its “definitely gotta see” places in the world. But if you’re living in a community like Fort Chipewyan in northeastern Alberta and are concerned about tarsands development and its impacts on your land, air, water and human health, then there’s a likelihood that you’ve heard of the Aamjiwnaang people and their struggle for justice. And because of that, if you’re from Fort Chipewyan there is a strong interest in visiting your Ojibway relations who appear to be plagued by the very same issues we face back home with injustice, environmental racism, cancers and systemic government and big industry repeated treatment that is reminiscent of old days colonial, imperial, archaic treatment of Canada’s First Peoples.

Fear
My recent visit to the Aamjiwnaang (a name that I could spell without looking at my cheat card after only two days there) First Nation was both pleasant and solemn. I can recall many times back home in Fort Chip, the outsiders I bring home to visit our community, how totally amazed they are about how hospitable our people are despite the fear of the known and unknown in our environment. I found the same in Aamjiwnaang.

I was picked up at the airport in Sarnia by good friend and long-time Rights-activist Ron Plain and treated to dinner along with Sarah Wiebe and Mckay Swanson. Wiebe, a long-time community organizer and working on a dissertation, is a friend of the community and cares about the Aamjiwnaang. The same is true of Dayna Scott who couldn’t join us for dinner. Scott, an Osgoode Hall law professor was also organizer of the Community Forum on Pollution and Action, of which I was invited to give the keynote address. Swanson is a young man from the reserve, can’t be more than twenty, and is the founder of the community’s youth group called Green Teens. Over the next couple days I would hear him singing rap and expressing his concerns with the future of his young son and fellow community members.

Ron hadn’t planned to give me the “toxic tour” for another couple of days but with a bit of coaxing and unable to contain my curiousity, he agreed to a partial tour of Chemical Valley. We headed out in the dark. Almost immediately the lights of the plants of Imperial Oil, Suncor, Shell and BP were evident. In my days in the tarsands with what seems like hundreds of tours with journalists, filmmakers and Hollywood celebrities, the bright lights, giant facilities, flaring, and smoke stacks with toxic emissions, didn’t really phase me. But when Ron pulled into the cemetery where his people and the young boy who succumbed to leukemia are buried, he stopped, shut his car off and asked me to step outside the car with him, this hurt me. Just a tiny plot with headstones and freshly covered graves, this cemetery was fighting for space with Suncor Energy who was on all sides of the tiny cemetery separated only by a chain linked fence with signs that said “no trespassing”. Maybe the best way to envision it is to imagine Central Park in New York City surrounded totally by a cement world. We stood there in what should be a peaceful surrounding for the beloved departed, but any silence was drowned out by sounds of flaring, refineries, generators and more humming of this and that. I could understand why then, a story Ron told me of Green Party leader Elizabeth May when she came on this same tour, stood there and cried and couldn’t leave. It was bewildering. We proceeded from the cemetery to the reserve which was nearby without much words being spoken. Here too, the contrasts of playgrounds, daycares, homes with backgrounds of giant plants with stacks and flaring were too commonplace. If one wasn’t aware of provincial and Canadian governments, and oil companies treatment towards Indigenous peoples in their own lands today, you’d become enraged, ask why, demand justice, and maybe write a letter to someone who you’d think might help, like your MP or Premier or Prime Minister. 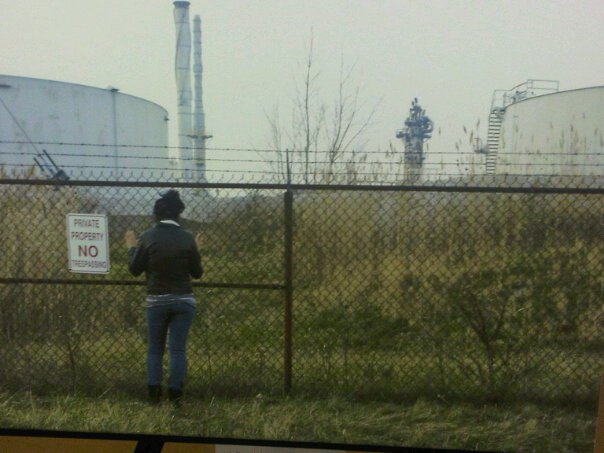 I was woken the next morning by a community Elder, Wilson Plain Sr., who invited me to breakfast. A bit early for me maybe, considering I was in a different time zone and couldn’t fall asleep straight away the night before. But I was happy to meet for breakfast. At breakfast I would hear of the Elder’s political work in his community from a young man to now, but the story he told me of the grave concerns the community members held with regards to environmental impacts, was that of his grandson Jeremy. We don’t know what caused it he said, but one day his Mother found bruises on him and so took him to the hospital to get it checked out. Within hours and multiple tests it was discovered he had leukemia. My grandson was gone in six days he said. He was thirteen. The most difficult part for the boys parent’s besides losing their young son so suddenly the grandfather said, was explaining to the younger children what was going on with their brother and friend. It has been five years since the loss. The Elder though, was interested in how and what could I bring to the youth of his community. So we drank our coffee and talked.

As a youth I couldn’t remember any interest in organizing to tackle big community issues. It’s different today. I remember Syncrude Canada Ltd. coming to Fort Chip to explain why “500” ducks perished in their Aurora toxic tailings lake, they would admit later it was more like 1606 ducks that died. At the community meeting, with Syncrude officials barely able to explain “why” and “what” they would do different while profusely apologizing to the community members, suddenly there was chanting and much to my surprise it was a group of youth, aged probably 8-12 with placards coming into the hall. They shouted “stop killing Lake Athabasca” and “our lake is not a tailings pond” among others. They interrupted the meeting and with authority ensured they were being heard. With social media, television, youth are becoming more and more aware of their surroundings and issues that community’s are grappling with. My friend Roy from back home one day told me a story of his 9-year-old son at their dinner table one night. He recognized his son wasn’t eating so he asked what was the matter. He son said, Dad, do you think we should be eating this? It was moose meat. 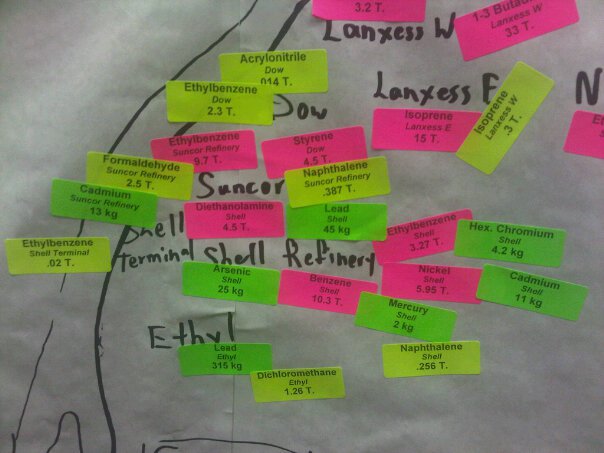 62 industrial facilities can be found within 25 km of the Aamjiwnaang First Nation reserve. In 2005, these facilities released more than 131,000 tonnes of pollution directly into the air. Photo by George Poitras

Like Fort Chip, Amjiwnaang youth have organized to tackle big community issues. And big oil and their deliberate poisoning of our lands, air, water and health are not a problem for them. In Aamjiwnaang, I heard youth rapping with words about the atrocities that would stop you in your tracks and make you sit up and listen. Incredible talent yet troubling that such young people should be telling such stories. I made a promise that within this year both Fort Chipewyan and Aamjiwnaang’s youth would meet.

Ever wonder why our provincial or Canadian governments are not protecting the “Indians” or for that matter Canadians from unfettered tarsands destruction or Chemical Valley insanity? It’s because they are far too busy spending millions to greenwash the industries in places like Times Square in New York City or Trafalgar Square in downtown London. Or they are far too busy lobbying foreign governments like Washington and California or the European Union discouraging them to adopt lesser than adequate energy policies for fear they might thwart foreign export of the tarsands which would also have implications for Chemical Valley.

We will not sit beside the trail

Chief Poundmaker, one of Canada’s most revered leaders, said, “It would be easier just to fold our hands and not make this fight…, to say, I, one man, can do nothing. I grow afraid only when I see people thinking and acting like this. We all know the story about the man who sat beside the trail too long, and then it grew over and he could never find his way again. We can never forget what has happened, but we cannot go back, nor can we just sit beside the trail.”

Fort Chipewyan and Aamjiwnaang fight principally for the protection of our constitutionally protected Rights, conservation of our lands and the Right for our people to live without fear of our lives, fear of our lands, air and water to be poisoned. We fight principally to ensure that we are able to hand down a healthy environment to children born two, three, four generations into the future.

Through fear of living vulnerably in a land that has grasped and cut short lives like the “Grant’s” of Fort Chipewyan and the “Jeremy’s” of Aamjiwnaang, our communities will persevere, will prevail, as we have since contact with western settlers and despite multiple attempts by the same governments to annihilate us. 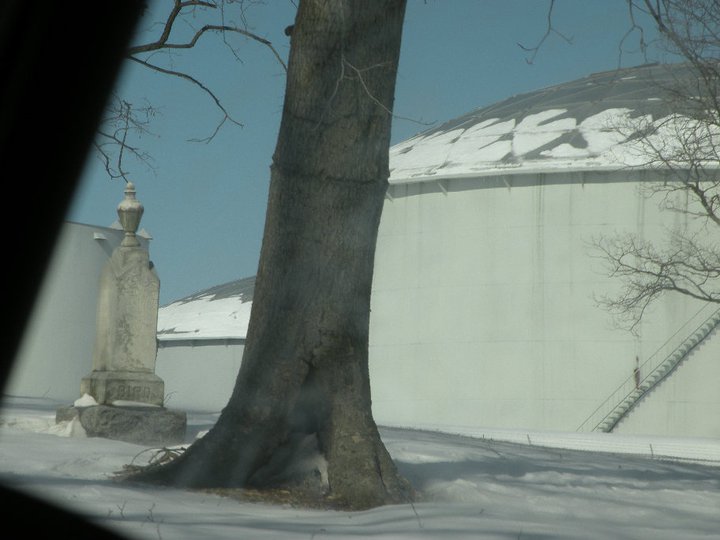 Fort Chipewyan and Aamjiwnaang’s stories may be one of plight and despair but what I see when I’m home and what I’ve seen in my recent visit to the friendly community of Aamjiwnaang, is one of hope. And as long there is one person with hope or thousands and I’ve seen in both our communities, there will continue to be challenges to this industry. We will not sit idly beside the trail.