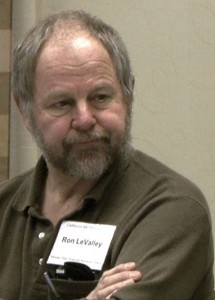 Photo of Ron LeValley at an MLPA Science Advisory Team meeting by David Gurney
Support our journalism. Become a Patron!

Yet more evidence of the corruption of the individuals who oversaw the process was revealed when a federal judge in San Francisco on May 20 sentenced Ron LeValley of Mad River Biologists, the former co-chair of the MLPA Initiative Science Advisory Team for the North Coast, to serve 10 months in federal prison for his role in a conspiracy to embezzle over $852,000 in federal funds from the Yurok Tribe.

In February, LeValley pleaded guilty to a single federal charge of conspiracy to commit embezzlement and theft from an Indian Tribal Organization (18U.S.C §§ 371 and 1163) in the complex scheme in collaboration with former Yurok Forestry Director Roland Raymond. According to court documents, LeValley submitted more than 75 false invoices between 2007 and 2010 in payment for “work” on northern spotted owl surveys that was never performed.

Raymond would write checks from the Tribe and LeValley would then funnel the money back to him, less 20 percent.

U.S. District Court Judge William Alsup also sentenced LeValley to three years supervised release, along with ordering LeValley to perform 100 hours of community service and to give talks about his crime to 200 people.

In addition, the judge ordered LeValley and Raymond to jointly repay the $852,000 they embezzled from the tribe as restitution to the victims of their crimes.

The sentencing statement submitted to the judge by the U.S. Attorney’s Office recommended a one-year prison sentence, citing LeValley’s cooperation in the case:

“The applicable guidelines range for LeValley is twenty-four to thirty months’ imprisonment. Like Raymond, LeValley proffered, cooperated, and substantially assisted and expedited the government’s prosecution of the Yurok Tribe cases. Unlike Raymond, LeValley’s post-charging conduct consistently has demonstrated acceptance of responsibility, candor, and a commitment to correcting course.

From the low end of the guidelines range, the government moves for a twelve-month downward departure pursuant to U.S.S.G. § 5K1.1 and recommends imprisonment for twelve months and one day. The government also recommends that the Court order LeValley jointly and severally liable for $852,000 in restitution.”

While acknowledging LeValley’s cooperation on the charges, the U.S. Attorney noted, “he has not suffered meaningful injury or incurred danger or risk of injury through his cooperation. If anything, cooperating has helped repair his damaged reputation. Still, LeValley’s assistance was timely and useful from the government’s perspective.”

On the other hand, LeValley’s attorney, William H. Kimball, recommended “a non-custodial sentence of home confinement and rigorous community service,” after citing his “personal history and characteristics” in the defendant’s sentencing memorandum:

“The criminal conduct in this case is, by all accounts, a complete aberration in the life of Ron LeValley — a man whose ‘personal history and characteristics’ are not only strikingly at odds with the events in this case but also dramatically different from those routinely presented for sentencing in white collar cases. Ron LeValley’s life has been defined both by his concern for others and for the environment of Northern California. Unfortunately, by foolishly and naively agreeing to participate in a criminal conspiracy that he believed was intended actually to help members of the Yurok Tribe, Ron in fact hurt the tribe and its members deeply.”

LeValley’s co-conspirator, Roland Raymond, was sentenced to three years in prison in January.

After the sentencing, Thomas O’Rourke, Chair of the Yurok Tribe, told the North Coast Journal that he was very disappointed with the sentence, describing it as a slap on the wrist.

“He’s considered a leader in the community, and pillars of the community are held to higher standards,” O’Rourke said. “In my mind, and in the tribe’s mind, he’s a crook. And, basically, he was slapped on the wrist with the sentence.”

“O’Rourke said LeValley has never taken full responsibility for his actions, or showed remorse for the damage he’s done to the Yurok Tribe,” according to the Journal.

“He said he was duped, that he was tricked,” O’Rourke told the publication. “He’s an intelligent man, a business man, and he didn’t get this far in life being tricked … The Yurok Tribe is very disappointed in the sentence, and in the system.”

This “science” was used to close vast areas of the North Coast to fishing and tribal gathering under the MLPA Initiative – while doing nothing to stop pollution, fracking, oil drilling, wind and wave energy projects, military testing and all human impacts on the ocean other than fishing and gathering.

“I would like to know how the state of California is going to revise the science advice LeValley provided for the North Coast MLPA Initiative process, based on him filing false documents,” said Jim Martin, West Coast Regional Director of the Recreational Fishing Alliance (RFA), “His work on the Science Advisory Team wasn’t at all responsive to public concerns during the process.”

He suggested forming a “truth and reconciliation commission” to unravel “what really happened” in the MLPA Initiative.

The validity of the science employed by the MLPA Initiative Science Advisory Team under LeValley’s leadership becomes even more suspect when one considers that LeValley and the Team repeatedly and inexplicably refused to allow the Yurok Tribe to present their scientific studies regarding “marine protected areas.”

The Tribe exposed the questionable science of the MLPA Initiative in a statement on June 6, 2012 that questioned the “protection” provided in the so-called “marine protected areas, showing how two species, Pacific eulachon and mussels would be “summarily mismanaged.”

“To date, there has been no scientific data submitted suggesting that mussels on the North Coast are in any sort of danger or are overharvested. In fact, it’s just the opposite. The readily available quantitative survey data collected over decades by North Coast experts shows there is quite an abundance of mussels in this sparsely populated study region,” the Tribe continued.

“Fish like Pacific eulachon, also known as candle fish, are given a high level of protection, or in other words, their harvest is not limited by the proposed regulations. Eulachon are near extinction and listed as threatened under the federal Endangered Species Act,” the Tribe stated.

“Both of these marine species are essential and critical to the cultural survival of northern California tribes,” said Thomas O’Rourke, Chairman of the Yurok Tribe. “However, under the proposed regulations they would be summarily mismanaged. It’s examples like these that compel our concerns.”

The Tribe said it attempted on numerous occasions to address the scientific inadequacies with the MLPA science developed under the Schwarzenegger administration by adding “more robust protocols” into the equation, but was denied every time.

For example, the MLPA Science Advisory Team Co-Chaired by LeValley in August 2010 turned down a request by the Tribe to make a presentation to the panel. Among other data, the Tribe was going to present data of test results from other marine reserves regarding mussels

The Northern California Tribal Chairman’s Association, including the Chairs of the Elk Valley Rancheria, Hoopa Valley Tribe, Karuk Tribe, Smith River Rancheria, Trinidad Rancheria, and Yurok Tribe, documented in a letter how the science behind the MLPA Initiative developed by Schwarzenegger’s Science Advisory Team is “incomplete and terminally flawed.”

On the day of the historic direct action protest by a coalition of over 50 Tribes and their allies in Fort Bragg in July 2010, Frankie Joe Myers, Yurok Tribal member and Coastal Justice Coalition activist, exposed the refusal to incorporate Tribal science that underlies the “science” of the MLPA process.

Wouldn’t it have been prudent for the Natural Resources Agency and Department of Fish and Wildlife to have postponed the implementation of the alleged North Coast “marine protected areas” until this case had been resolved in the courts – and when the legitimacy of the “science” of the MLPA Initiative was already facing severe criticism from respected Tribal scientists?

And now that the trial is over, isn’t it time for a complete investigation into the questionable “science” of the MLPA Initiative, especially when the Co-Chair of the MLPA Science Advisory Team is headed to federal prison after forging documents in a conspiracy to embezzle $852,000 from the Yurok Tribe?

The Marine Life Protection Act (MLPA) is a law, signed by Governor Gray Davis in 1999, designed to create a network of marine protected areas off the California Coast. However, Governor Arnold Schwarzenegger in 2004 created the privately-funded MLPA “Initiative” to “implement” the law, effectively eviscerating the MLPA.

The “marine protected areas” created under the MLPA Initiative fail to protect the ocean from oil spills and drilling, water pollution, military testing, seismic testing, wave and wind energy projects, corporate aquaculture and all other uses of the ocean other than fishing and gathering.

Reheis-Boyd, a relentless advocate for the expansion of fracking in California, the construction of the Keystone XL Pipeline and the weakening of environmental laws, also served on the MLPA Blue Ribbon Task Force for the North Coast and North Central Coast.

The MLPA Initiative operated through a controversial private/public partnership funded by the shadowy Resources Legacy Fund Foundation. The Schwarzenegger administration, under intense criticism by grassroots environmentalists, fishermen and Tribal members, authorized the implementation of marine protected areas under the initiative through a Memorandum of Understanding (MOU) between the foundation and the California Department of Fish and Wildlife.