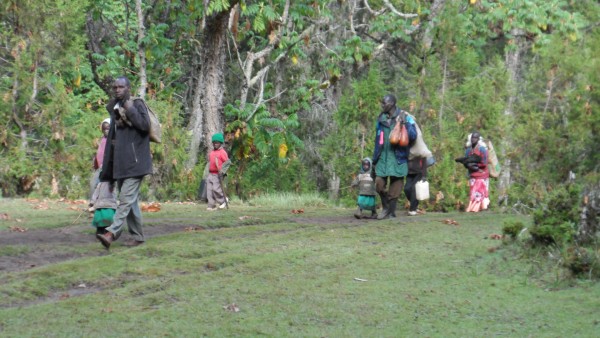 We, the No REDD in Africa Network (NRAN) together with the undersigned organizations and individuals, strongly condemn the massive evictions and forced relocation of the Sengwer Indigenous People, one of the few remaining hunter-gatherers of the world, from their ancestral home in Kenya’s Cherangany Hills. The Kenyan government calls the Sengwer People ‘squatters,’ despite the fact that they and their ancestors have lived in the Cherangany Hills since time immemorial; and that Article (63d) of the Kenyan constitution (2010) grants them inalienable rights to their ancestral lands.

Sengwer spokesman Yator Kiptum denounced the “disaster” carried out by a combined force of the Kenya Forest Service (KFS) and Administration Police, a paramilitary unit of the police, now evicting the Sengwer, destroying property and burning homes[1]. “The government of Kenya is forcing us into extinction,” he said.[2] According to international human rights law such as the Convention on Genocide, forced relocation of ethnic or racial minorities is a very grave violation and can constitute genocide.

We take great exception to the press statement issued by the World Bank[3] in which it attempts to distance itself from the forced relocation of the Sengwer People. The cause and effect is perfectly clear; the Bank in its highly controversial role as both carbon credit financier and broker is aiding and abetting the forced relocation of an entire Indigenous People through its Natural Resource Management Plan (NRMP) which includes REDD (Reducing Emissions from Deforestation and Forest Degradation), in the Cherangany Hills.

What is perhaps most disturbing about the statement is the World Bank’s offer to the Kenyan government, “to share best practices in resettlement in line with its safeguard policies. These seek to improve or restore the living standards of people affected by involuntary resettlement.” The World Bank is both admitting its complicity in the forced relocation of the Sengwer People as well as offering to collude with the Kenyan government to cover-up cultural genocide. Claims of being able to restore and improve the living standards of evicted people such as the Sengwer are crude, paternalistic, colonial in nature and above all smack of sheer arrogance on the World Bank’s part.

From 2007 till date, there have been almost yearly forced evictions of the Sengwer People[4] with the latest evictions being the most violent of them all. It is no coincidence that the evictions began in 2007, the very same the year that the World Bank’s Natural Resource Management Project started[5].

In 2013, the Sengwer People moved to court to file an injunction against their imminent removal from their homes and in May an interim injunction was secured at the Eldoret high-court. These orders were further extended in November and on 18 January 2014; the same court issued further orders requiring that the police arrest anyone breaching the injunction until the matter of community rights to their land is resolved. The government of Kenya has continued to ignore these court orders, taking upon itself the role of judge and prosecutor of the Sengwer People’s case.

The Sengwer People are being accused of encroaching on and destroying the forests in the Cherangany Hills, leading to the drying up of rivers that provide water to nearby towns and villages. The government of Kenya states that evicting these ‘squatters’ is the only way to begin the ‘conservation’ of the ecosystems and specially the forests in the area. This is a complete obfuscation of the truth. The Sengwer People have always preserved these ecosystems in their ancestral land by practicing by living sustainably and are now facing complete annihilation under the guise of ‘conservation’ under REDD.

The Kenyan government insists on not distinguishing between the Sengwer People and a large group of Internally Displaced Persons (IDPs), including those affected by the 2007-2008 post-election violence, and victims of landslides who have settled in the Embobut Forest area. The government’s refusal to make this distinction is an attempt to falsely label the Sengwer People as “squatters.”

We are alarmed at the obvious connection between these evictions and the World Bank’s funding of the Kenyan government’s REDD+ ‘readiness’ program in the Cherangany Hills through the bank’s Natural Resource Management project (NRMP). REDD is a highly controversial emissions reduction scheme that uses forests, plantations and lands in the Global South as carbon offsets and supposed sponges of the fossil fuel carbon emissions and pollution from the Global North.

The head of conservation at the Kenya Forest Service, Mr. Solomon Mibei, is on record stating that “REDD+ mechanism is a future option.” He also admitted that the KFS is doing carbon financing workshops with communities. “At the moment, the KFS is conducting workshops with communities living around the Embobut forest and the Kakamega forest to educate them on carbon financing.” Furthermore, the Kenya Forest service has been designated as the REDD+ focal point for the coordination of national REDD+ readiness activities.

REDD+ allows rich polluting countries to shirk their historical responsibilities for and contribution to the climate crisis we now face by enabling them to shift the burden to ‘developing’ countries like Kenya. Instead of reducing emissions at source, which is the only sustainable way to stop the climate catastrophe, such schemes allow them to pretend to reduce emissions elsewhere in the world. Unfortunately as the Sengwer case shows, it is the poorest and most marginalized in developing countries who not only suffer the most from climate change but also the negative effects of the false solutions to climate change like REDD. These false solutions, above all, enable global economic interests to benefit from massive land grabs and the abuse of human and environmental rights.

The World Bank project initially claimed to address land claims of the indigenous communities, as part of the process of ensuring the fair and effective management of the Cherangany Hills forest. This was welcomed by the Sengwer People who thought it would be a great opportunity to address decades of marginalization and loss of access to their ancestral lands which they had faced under the hands of successive Kenyan governments.

But this initiative was soon dropped by the Bank which claimed that it was ‘too complicated’ but at the same time continued to fund the Kenyan government’s REDD+ work in the Cherangany Hills, thereby further entrenching the marginalization of the Sengwer People[6].

In January 2013, members of the Sengwer People made a formal complaint to the World Bank’s Inspection Panel, the organ tasked with the duty of reviewing the impacts of the projects funded by the World Bank[7]. The Inspection Panel visited Kenya in May 2013 to assess the eligibility of the complaint and members of the Sengwer People described the loss of access to much of their ancestral lands as well as their traditional right to protect the forests which they have always depended on for their survival[8]. The Inspection Panel found the complaint to be admissible and a full investigation was recommended, with the final outcome of the investigation expected by the end of the first quarter of 2014.

Unfortunately, the abuses against the Sengwer People are not an exception. The violent eviction of the Ogiek People from the Mau Forest for UNEP-funded REDD is another example of Indigenous Peoples in Kenya being evicted for REDD.[9]

The No REDD in Africa Network’s Maputo Declaration (2013)[10], declared that REDD-type projects are leading to the displacement of forest dependent communities, servitude, killings, repression and other human rights abuses, and the Sengwer Peoples’ plight is a clear example of what we condemn and why there must be no REDD in Africa.

The No REDD in Africa Network has repeatedly denounced that  REDD+ is not merely a false solution to climate change, but is emerging as a new form of colonialism, economic subjugation and a driver of land grabs so massive that they may constitute a continent grab.[11] We must defend the continent from carbon colonialism.

The forced relocation of the Sengwer People by the AK-47 touting Kenya Forest Service is reminiscent of the forced removals of rural communities by the then South African government during the apartheid era. We had hoped that this kind of history would not repeat itself in the continent.

Demands to Government of Kenya:

Demands to Governments and the United Nations:

In closing, we cordially request that the Government of Kenya, the United Nations and the African Commission on Human and Peoples’ Rights to respond to these demands and requests, and take the corresponding action.

For the No REDD in Africa Network (NRAN),

[1] Please see NRAN’s report on the Sengwer evictions at: http://www.no-redd-africa.org/index.php/27-countries/kenya/96-kenya-preparing-for-redd-in-the-embobut-forest-and-forcing-sengwer-people-into-extinction

[6]Kenya defies its own courts: torching homes and forcefully evicting the Sengwer from their ancestral lands, threatening their cultural survival. Available on: http://bit.ly/1eCydMY

[7]How the World Bank is implicated in today’s Embobut Evictions, http://bit.ly/1eCydMY