For the Transformation of Colombia 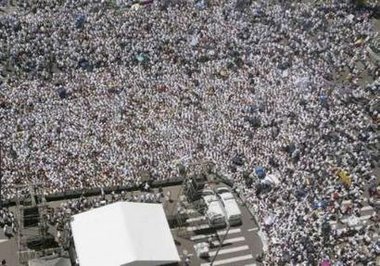 The Association of Indigenous Councils of Northern Cauca (ACIN) have issued an important message surrounding the purpose of the National Indigenous and Popular mobilization in Colombia, or “Minga.” It is not simply to advance matters concerning indigenous people, but to “convene the transformation of Colombia.”

The message comes a couple days after the indigenous movement, which is being led by more than 12,000 indigenous people and activists, dismantled the pan American highway blockade, and held a set of failed negotiations with Colombia’s government.

Since protests began last week, more than 60 people have been injured and at least two have been killed.

The movement will now march from La Maria, Cauca, where the national protest has been most concentrated, to Colombia’s third largest city, Cali.

An international campaign will also be pursued, “so that people understand the dimension of our problems.”

An Historic Day for Indigenous Peoples

By the Association of Indigenous Councils of Northern Cauca

“We don´t have a Government” was the conclusion reached by Feliciano Valencia, a native Nasa leader from CRIC during his speech at the press conference at La María Piendamó. In a deep, firm and measured tone, his words were heard in profound silence by an audience of about 5000 indigenous people and some representatives of the Colombian media.

Feliciano began the initial part of his speech by making a number of very strong points which began with “It is not true that….”. Indigenous peoples are not terrorists, the mobilization (Minga) is not controlled or run in coordination with FARC, land is not the main nor the only issue, indigenous peoples have not negotiated, nor reached an agreement with the Colombian Government, contrary to what was falsely stated by the Ministers of Justice and the Interior, Agriculture and Social Welfare, Indigenous peoples did not attack the Colombian armed forces and were instead mercilessly and brutally attacked with live ammunition which have left 132 wounded, one dead and one dying, the Government has not fulfilled its obligations with indigenous peoples and has made no effort to keep its promises.

Feliciano then proceeded to describe the Government´s and media behaviour towards the mobilization.

“We invited the President to a dialogue and he responded with a military assault.” Feliciano described the mediatic manipulations, the lies fabricated by the commander of the Police, President Uribe, the head of the Secret Service and several Ministers.

Beyond recent events, Mr. Valencia explained how indigenous peoples are being exterminated not only through a permanent dirty war, military offensives and crossfire, but also through policies of extermination, exploitation and exclusion that have become systematic under the current administration in order to deliver the country´s wealth to transnational corporate interests. This account lead to the indictment: “We don´t have a Government in Colombia”.

Consequently, the Minga convenes the primary constituent assembly. The people of Colombia. All Colombians. Not to follow an indigenous agenda but to weave a collective agenda, a new country from our collective demands and pain.

Feliciano proceeded to outline the five point agenda:
1. No to the economic model and the FTA´s with the US, Canada and Europe;

2. A removal of the legislation that empoverishes peoples, destroys and denies rights and freedoms, delivers the wealth of the country to corporate interests and has not gone through consultation with those affected;

3. No more war and terror as the main Government policy.

4. Respect and application of international and national agreements and establishment of the conditions that will allow the people to construct a new, possible and necessary country.

5. A proposal not for indigenous peoples, but from them, to construct jointly a new society.

The authorities announced a march towards the city of Cali, which will leave from La María next Tuesday. Other social movements and organizations have announced that they will join and mobilize and the whole country is invited to mobilize and gather in Cali.

The words have been stated and now the talk will be walked until a new reality gets on the way, from a country with owners and no peoples, to a country of the peoples without owners.

Today, we heard one of the wisest and clearest statements in recent Colombian history. From being marginalized and defamed as terrorists, from being wounded and murdered like rats, from being lied about and abused, from being excluded, indigenous peoples have stood back and shown their wisdom and dignity taking on their leadership as masters of wisdom for the construction of a new world on this territory of Mother earth now known as Colombia.

The audio recording will be posted on www.nasaacin.org . Now, tired, saddenned by the wounded and dead who will lead the march, indigenous peoples are standing strong to convene the transformation of Colombia. A major struggle for which they request the solidarity and support of international observers.