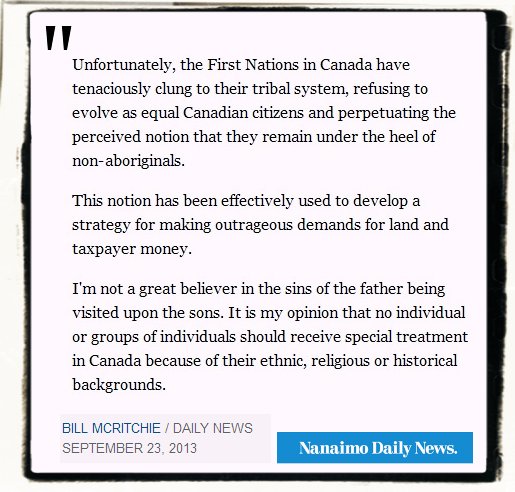 Fool me once: Colonialism denial finds a happy home in Canadian media

Just one day after tens of thousands people took to the streets of Vancouver in support of reconciliation, the Nanaimo Daily News once again published a racist rant making it clear that for too many Canadians, reconciliation is really about soothing the discomfort of settlers who do not want to take responsibility for Canada’s annihilationist policies which continue to decimate Indigenous peoples. The article, by Bill McRitchie, once again exhorts us to “get over it”, because after all:

“…the world was a very different place in those eras [18th, 19th early 20th centuries]…

…The concept of human rights was virtually unknown…

…As our country matured and demographics changed through massive immigration and the evolution of our society, however, the playing field began to level.” – Bill McRitchie, Nanaimo Daily News, September 23, 2013

Ah yes. The old “bad things happened but they got better” trope I just finished discussing in my last article. But wait! There’s more!

“Unfortunately, the First Nations in Canada have tenaciously clung to their tribal system, refusing to evolve as equal Canadian citizens and perpetuating the perceived notion that they remain under the heel of non-aboriginals.

This notion has been effectively used to develop a strategy for making outrageous demands for land and taxpayer money.

I’m not a great believer in the sins of the father being visited upon the sons…” – Bill McRitchie, Nanaimo Daily News, September 23, 2013

Hugh Nicholson, the Nanaimo Daily News’  division manager issued an apology the last time the paper ran an article like this. I’d like to make a snarky comment about this clearly insincere apology reflecting the Residential School apology…oh wait, I think I just did.

Things are not better, Hugh

I am addressing this article to Hugh Nicholson, the publisher of the Nanaimo Daily News, because he has direct power over the publication of articles like this, and Don Olsen’s racist rant earlier.

Hugh Nicholson is actively providing a venue for people like McRitchie and Olsen to basically engage in the popular Canadian equivalent of Holocaust denial. I make that comparison mindfully, because the most ‘successful’ Holocaust deniers do not claim that the Holocaust never happened at all…they minimise and distort the facts in order to claim it wasn’t nearly as bad as it was. They then claim that Jewish people use the Holocaust as an excuse to *insert racist accusation*.

However I do not want to conflate the issue and so I’d like to coin a new term if I may. I’m going to call the opinions of people like McRitchie and Olsen and Klassen, and Flanagan and oh so many others “Colonialism denial”. This denial often manifests itself as a recognition that colonialism happened, but that it is no longer a factor.

I have repeatedly addressed the claim that “bad things happened, but it’s better now”. I have linked to research on media narratives in Canadian newspapers which proves that narratives such as those published by Nicholson have hardly changed at all since 1869. James Daschuk also does a bang up job of showing how deliberate colonial policies of starvation ensured that TB gained a foothold on reserve, and continues to wreak havoc with Indigenous health under ‘modern’ policies. The recent reconciliation events in British Columbia are themselves a recognition that the policies of the not-distant past have had lasting and horrific effects on the social and physical health of Indigenous peoples.

I have discussed the deliberate efforts of the Canadian government to destroy the ability of First Nations to farm successfully in the Prairies and provided a link to research on the topic. I have discussed the 60s scoop, and colonialism within the child welfare system that continues to this day. I have discussed how ‘modern’ treaty making differs only in words,  from those “empty promises designed to overtly appease the indigenes while covertly exploiting them” that McRitchie readily admits were the hallmark of the historic treaties. I have even shown how the 1969 White Paper, intended as an official piece of colonialism denial, has found a new home in the First Nations Property Ownership Act.

ALL of these things are well documented with reams of peer-reviewed research available, with thousands of pages of official findings from commissions and inquests and so forth. The evidence is overwhelming: it is impossible to divorce the present from the past the way McRitchie et al. wish to do, and further, colonialism continues into the 21st century.

Sins of the fathers? Look to your own sins.

McRitchie attempts to separate himself from the ‘sins of the past’ by locating himself and all other Canadians in the 21st century; a century that is a scant 13 years old, by the way. Even if McRitchie were a 13 year old boy, he could not successfully ignore the events that have occurred in the lifetimes of those people still living today.

Canadians need to stop pretending that these evils happened only in the distant past. The unavoidable truth is that these evils happened in your own lifetimes, and what is worse, continue to happen. These are not merely the sins of your fathers or great-grandfathers, or great-great-great grandfathers. These are the sins of Canadians today in 2013 who engage in Colonialism denial, and who benefit from the continued  colonial practices of the Canadian state. Canadians have an obligation to learn about their own history so they can stop engaging in Colonialism denial through sheer ignorance. Failure to do so is a modern day sin no Canadian can blame on their fathers.

And to you, Hugh Nicholson. Shame on you. You published this latest piece of Colonialism denial just one day after Indigenous and non-Indigenous peoples alike took to the streets in massive support of the need to make things better, truthfully, and together. If you have convinced yourself that your decision to publish this letter was an exercise in ‘journalistic balance’, save it. I refer you to your own words:

“The sentiments expressed were entirely his own and in no way reflect the views of the newspaper. The letter should not have run. We apologize for any distress this may have caused our readers.” – Hugh Nicholson, editorial clarification, March 2013

Your actions render this apology utterly meaningless. Your choice to publish this article does indeed reflect on this newspaper. Fool me once, shame on me.

Fool us twice? Shame on us if we don’t hold you to account for this.

This op-ed originally appeared at apihtawikosisan.com. It has been republished with permission from the author.