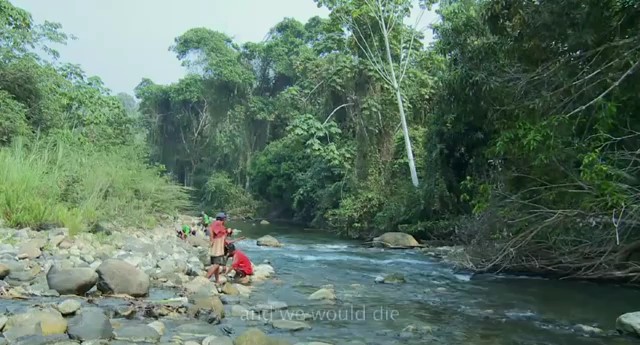 Flooding Our Future: Megadams of the Peruvian Amazon

The Indigenous Peoples of the Ene-Tambo river basin are now facing an uncertain future, thanks to a series of new hydro dams that are being planned for the Peruvian Amazon. In this short film, you will learn about the Paquitzapango dam and what the Ashaninka Peoples have to say about it.

The first of five dams that have been prioritized by the government, the Pakitzapango dam is being carried forward with little regard for the Ashaninka, who stand to lose everything if the dam is completed.

The dam would be located on the Ashaninka’s legally-protected territory, in the sacred canyon of Pakitzapango (House of the Eagle), an area of great cultural and spiritual significance to the Ashaninka.

Once constructed, the hydro project would then force 10,000 Ashaninka off their traditional lands.

According to The Rainforest Foundation UK, who is working with Central Ashaninka del Rio Ene (CARE) to BAN THE DAM,

“The project is being developed by Brazilian construction giant Odebrecht and electric utility Eletrobras, which estimate that it will generate 2,000 megawatts (MW) mostly for export to Brazil. In addition to the Pakitzapango Dam, the Tambo 40,Tambo 60 and Sumabeni dams are also planned in the Ene-Tambo River Basin. Ten Ashaninka communities with close to 10,000 people living on both sides of the Ene River would be displaced and their livelihoods harmed by Pakitzapango alone. The health of the Ene River is crucial for the Ashaninka indigenous people, who depend on its fish resources, the fertile soils of its floodplains, and the many foods and products in the surrounding forests. They also cultivate small plots of land on which they grow manioc, yams, peanuts, bananas and pineapples. The forest provides edible and medicinal roots, honey, and materials to make baskets and mats. Yet the reservoir would flood 734 square kilometres of forests, arable lands and water sources upon which the Ashaninka depend.

“Even though Peru ratified Convention No. 169 of the International Labour Organization (ILO), which requires that indigenous and tribal peoples be consulted on issues that affect them, the Ashaninka people whose lands are legally protected have not been consulted about the Pakitzapango Dam. The Ashaninka are one of the largest indigenous groups in the Peruvian Amazon, numbering close to 70,000. Although the Spaniards never conquered the Ashaninkas, the intrusion on their lands – first by rubber-tappers and missionaries, and later by settlers, guerrillas, coca growers and traffickers – brought about enslavement, torture, displacement and massacres. During the internal war in Peru in the 1980s and 1990s, the Maoist guerrilla group Shining Path gained control over areas of the Ene and Upper Tambo rivers. Many Ashaninka were forcibly displaced or enslaved, and close to 6,000 were killed. Thirty to forty communities disappeared. Yet, the resiliency of the Ashaninka is extraordinary, and they maintain their ethnic identity. Today, they are fighting against illegal logging and coca growing, and are working on managing and protecting their forests. The Ashaninka Organization of the Rio Ene (CARE), initially created in 1993 to support the Ashaninkas after the war, is the leading Ashaninka organization working in defense of communities, forests, and lands, and to protect the Ene River.”

The Ashaninka are also challenging the dam projects on the ground level, an effort that has already met with a major success: Odebrecht recently announced its withdrawal from the ‘Tambo-40’ hydro dam, due to Ashaninka’s unwavering opposition.

“It is very important that Odebrecht have respected the desire of our communities to live in peace in the territory where we have always lived. Decisions like this one show that companies are willing to pass up projects with large impacts to local population and avoid unnecessary socio-environmental problems. We ask the Peruvian Government to stop granting concessions in our territory. We hope that the Ministry of Energy and Mines removes this project from its portfolio once and for all,” said Ruth Buendia Mestoquiari, President of CARE

The Ashaninka are now turning their attention to the ‘Tambo-60’ dam, which is being planned by Electrobrás.

For more information you can visit the following websites: