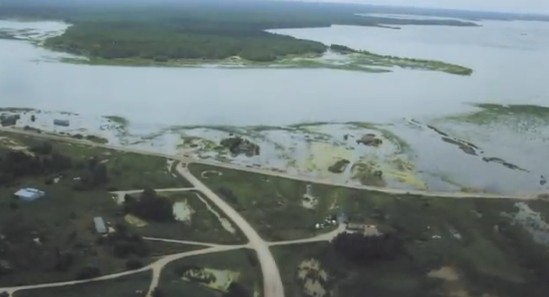 Lake St. Martin First Nation is an Anishinaabe community situated in the Interlake region of Manitoba, Canada. In May 2011, a devastating “superflood” orchestrated by the Government of Manitoba permanently displaced the First Nation.

As if robbing the community of its ancestral land and livelihood wasn’t enough, the government unilaterally selected an abandoned Cold War radar base as an interim relocation site for the entire community of 2,394 people.

After the reserve was flooded, several Anishinaabe evacuees received letters from Manitoba’s Emergency Measures Organization (EMO) stating that they were ineligible for any kind of compensation–despite losing everything–because they did not have titles to their houses.

In 2012, the province took things even further by drastically cutting a critical daily allowance that community members received for food and expenses from $23.40 to $4.00. With no money to purchase food, many of the evacuees from that time on were forced to rely on food banks to survive. Some were also stuck in hotels, unable to afford first and last month’s rent.

Today, more than two years after the flood, the people of Lake St. Martin First Nation are still without a land base.

It didn’t have to be like this. As the documentary film, “Flooding Hope: The Lake St. Martin Story” shows, the community designed and proposed a development plan for a sustainable “higher ground community” that would not be at risk of any future flooding. 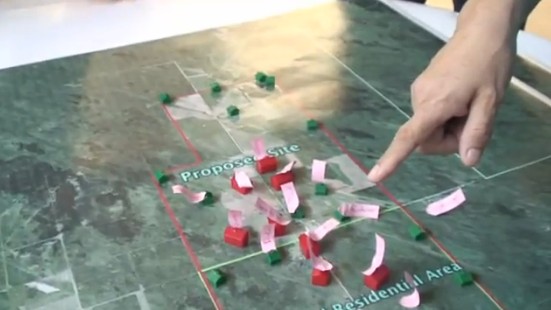 >Lake St. Martin’s proposed community site would cost a mere fraction of the $40 million the Province has already spent on the unsustainable interim community site

Despite the fact that it would have solved all of the First Nation’s problems while saving the province tens or even hundreds thousands of dollars, the government rejected the proposal.

The Manitoba government has been practicing a politics of displacement with Lake St. Martin First Nation. Without providing meaningful consultation, the province decided to drown the reserve in order to spare the city of Winnipeg from dealing with oncoming flood waters.

The government also had the option to relocate some upstream cottagers and farmers who live adjacent to the reserve; however, the government would have been forced to compensate them in full.

Flooding has a long history on Lake St. Martin. With the Fairford Dam that was built in 1961 and the Portage Diversion that followed ten years later, all farmland on the reserve was eventually turned into marsh. The flooding became critical when the Province sacrificed the reserve without performing an environmental assessment of any kind or meaningful consultation and accommodation as required by law.

Sadly, the situation isn’t getting any better for the Anishinaabe community. The evacuees have reported experiencing overt racism daily in their hotels and throughout Winnipeg. What’s more, they are still shaken by the negative way the media and government portrayed them as if they were living high off the public purse. Chief Adrian Sinclair in a Globe and Mail national newspaper article described how community members were called “freeloaders” and that Elders were physically assaulted and yelled at.

Then there are the mental and physical health impacts of the evacuation. Research on other flooded communities has found that the most severe and enduring effects of relocations are when the entire community is affected and where the disaster is man-made rather than natural. The artificial flood at Lake St. Martin First Nation required the entire community to relocate permanently.

Relocation, whether voluntary or compulsory, functions as a significant stressor that disrupts social support networks. Involuntary relocation of rural indigenous communities also can result in a cultural identity crisis that forces increased dependency upon the government responsible for the relocation. The threat of relocation alone for indigenous people is associated with severe levels of psychological distress and dysfunction.

Some community members are already feeling this burden of displacement. A resolution that was authored for the Southern Chiefs’ Organization notes that the “Social impacts from the stress of displacement from the 2011 flood [include] attempted and actual suicides, family break-ups, increased family violence, drug use, alcoholism, and recruitment of community members by gangs in urban centres and host communities.” Health impacts, meanwhile, include “Miscarriages, depression, other mental health symptoms, difficulties addressing those who have a chronic disease… and… premature deaths.”

To begin to heal from this ongoing trauma, the First Nation needs access to appropriate lands in order to build a sustainable community that will accommodate the Anishinaabe identity and provide adequate economic opportunities for everyone. The now-impoverished First Nation tried to raise funds to buy land for such a community; unfortunately, because there was so little left after the flood, and with no government compensation or backing, the effort did not succeed.

The government is now bent on continuing its politics of displacement. Without consulting the First Nation, the province decided to purchase the flood-prone Halaburda lands adjacent to the old reserve. Despite the fact that this new land would place the First Nation directly on the path of being flooded again, the government insists that it’s the only option.

Both the Province and federal government seem to be betting that the First Nation will accept anything the Province offers them. However, that remains to be seen. Despite being flooded and beaten down, the Halaburda lands offer no hope for a better tomorrow.

The community will vote on whether or not to accept the land sometime in 2013 or 2014.