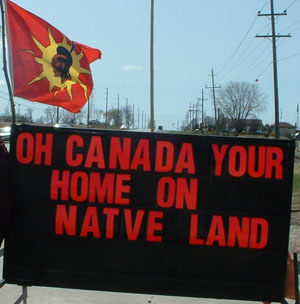 Issues in this month’s bulletin include: an analysis of “Canada’s War to terminate First Nations” (Harper’s apology in context), the OPP & Mohawks (w/ a transcript of the phone conversation between Shawn Brant & Julian Fantino — something you probably haven’t seen yet), “the UN Declaration on the Rights of Indigenous Peoples and the 2010 Olympics,” and “Canada’s Tibetans: Barriere Lake & Other First Nations.”

You can download the bulletin by heading over to the Library and Archives Canada website. Back issues are available there as well.

My belief–which is based upon my policy experience and observations over the past three decades of First Nations-Canada relations–is that the federal government (with provincial and municipal support) is attempting to empty out (limit & restrict) the meaning (scope & content) of Aboriginal and Treaty Rights in section 35 of Canada’s constitution until it is empty or “spent”.

Instead of being recognized and affirmed as a ‘distinct order of government’ in Canada, under the current federal policy approach First Nations will eventually become ‘ethnic municipalities’.

So it is not a “conventional war” that Canada is waging against First Nations, and it is not covert, although there is a sophisticated propaganda machine in Ottawa to generate Crown public spin against First Nation interests in any dispute. The Crown war is essentially a legal-political-fiscal conflict over the interpretation/assertion/implementation of Aboriginal and Treaty Rights over lands and resources by First Nations.

The Indian Act is still used as the primary statute of control and management over “Indians and lands reserved for Indians”, along with the coercive federal-provincial fiscal arrangements.

So when Prime Minister Harper says “[t]oday, we recognize that this policy of assimilation was wrong, has caused great harm, and has no place in our country.” He is only referring to the historic Indian Residential School “system”.

In Canada, it seems First Nations and their organizations, are so dependent on funding from the federal and provincial governments that they seem to be compromised in their ability to protest or resist Crown legislation, policies or practices.

The result over the past few decades, is that more and more First Nations and their organizations, are lining up to compromise their peoples constitutionally protected, but as yet undefined, Aboriginal and Treaty Rights for some program and service dollars.

To beat Canada’s termination-extinguishment policies, fiscal coercion and neo-colonialism, it will take First Nations people on and off-reserve networking and organizing to resist and counter the Crown’s termination efforts. My advice is to do it peacefully and base your political actions on the facts, which should be documented, and if possible seek professional advice.

Remember, Ottawa has a war machine made up of compromised National Aboriginal Organizations [like the assembly of First Nations] and leaders who can support or denounce your political actions depending on their own interests. There are also the federal politicians that can support you or turn against your cause.

The federal public service outlasts the politicians and can conduct a long lasting “ground war”, meaning:
• they can inflict punishment locally by withholding funds,
• they can foment dissent between community factions, or between leaders and mem-
bers.
• they can put important capital projects from the top of the pile to the bottom of the pile, among other things.

This is often why local Chief and Councils often denounce their own people for doing political actions that anger the federal and/or provincial governments who are the funding agents for First Nations. Those First Nations who are collaborating with the federal termination agenda are well funded and organized. It is the unfunded, impoverished (and likely rural or isolated) First Nations who are the most disorganized and vulnerable. This situation is not new. It has been an
ongoing problem.

The future for First Nations is within our youth. As the adults, we should be providing guidance on how First Nations got into this situation and what are our options for getting out of it. The first step is learning that the overall federal objective is to eliminate the political and legal status of First Nations, in their ongoing war on First Nations collective rights.