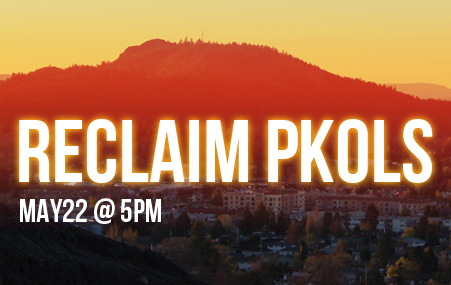 Victoria, BC and Coast Salish Territory, BC — WEC’KINEM (Eric Pelkey), a hereditary chief of the Tsawout First Nation, with support from the Songhees and local WSÁNEĆ nations, are calling on all peoples in the Victoria area to participate in a day of action to Reclaim PKOLS, the original name of Mount Douglas, on May 22nd at 5PM. The event will reinstate the traditional name for the mountain and reclaim the site where the Douglas Treaty was first signed with the WSÁNEĆ nations.

“This is something that our elders have been calling for, for many, many years,” said Pelkey, “to bring back the names we have always used to where they belong.”

PKOLS (pronounced p’cawls), which can be translated as “White Rock” or “White Head”, reflects the Indigenous oral history of the area. Stories of PKOLS go back to nearly the beginning of time for WSÁNEĆ (Saanich) people. Historically, it has been an important meeting place; and geological findings indicate that it was the last place glaciers receded from on southern Vancouver Island.

“It is a very important place for our people,” said Pelkey. “PKOLS is a part of our creation story within the WSÁNEĆ nation; and it’s where our treaty was first agreed to in 1852.”

James Douglas and his men met with WSÁNEĆ chiefs at the summit of PKOLS to discuss a treaty between the local Indigenous peoples and the settler newcomers. Outnumbered by WSÁNEĆ warriors, Douglas offered blankets and money and the eventual signing of the Douglas Treaty was understood to be a promise that the WSÁNEĆ people would not be interfered with. But this promise has since been broken.

To signify the renewal of this original nation-to-nation treaty relationship, organizers of the May 22nd action, including volunteers from local First Nations, the Indigenous Nationhood Movement and Social Coast, will stage a march up PKOLS from the base; a re-enactment of the signing of the Douglas Treaty; the telling of oral histories and traditional significance of the mountain; and the installation of a new PKOLS sign.

Beginning at 5:00pm on May 22nd, supporters will gather at the base of PKOLS in the lower parking lot, before beginning a march to the summit. “We expect this to be a major event,” said Pelkey. “We welcome all people to witness and participate in this important day for our people.”