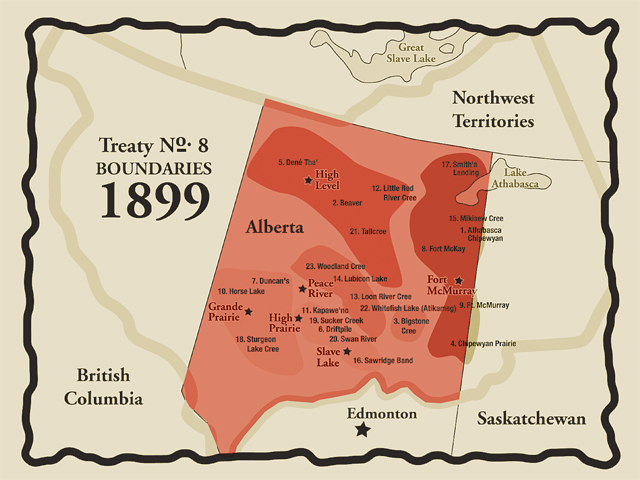 Map from www.Treaty8.ca
Support our journalism. Become a Patron!

October 18, 2012 – Fort McMurray, AB – Today the conservative government tabled a new version of Bill C-45, a 443-page bill, to implement its federal budget.  The Athabasca Chipewyan First Nation (ACFN) was taken aback by the proposed amendments stating they are indicative of the further erosion of Treaty rights in Canada.  ACFN leadership is particularly worried about suggested amendments to the Navigable Waters Protection Act and the removal protections of culturally significant and vital river ways from the act.

“This is unacceptable.  They have made a unilateral decision remove the protection of waterways without adequate consultation with First Nations and communities that rely on river systems for navigation and cultural practices protected under treaty,” stated Eriel Deranger, Communication Coordinator for the Athabasca Chipewyan First Nation. “Shell Canada has proposed to mine out 21km of the Muskeg River, a river of cultural and biological significance. This ultimately gives the tar sands industry a green light to destroy vital waterways still used by our people.”

The Athabasca Chipewyan First Nation is gearing up for presenting a question of constitutional law against the application of Shell Oil Canada to expand one of it’s existing project, citing lack of adequate or meaningful consultation and that the application would have adverse impact on their treaty rights.  In particular, the application calls for the mining out of 21 km of the Muskeg river, a river of cultural and traditional significance to both the people and wildlife in the area.  The new legislative changes would remove the protection of the Muskeg river making it much easier for Shell to gain approval.

“I am seriously concerned. We have seen the erosion of our people’s Treaty rights throughout various forms of legislation over the past decade.  The new proposed amendments in Bill C-45 are proof to us that the government hold little stock in our rights and title and are creating more loop holes for industry to continue annihilating our lands,” stated Chief Allan Adam of the Athabasca Chipewyan First Nation.  “We hope there will be a public outcry that echoes our sentiment.  After all, we all share the responsibility to protect mother earth.”