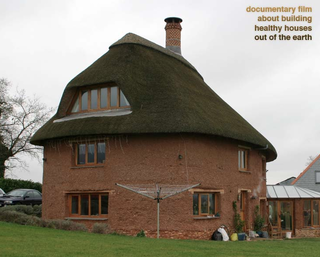 FIRST EARTH is a documentary about the movement towards a massive paradigm shift for shelter — building healthy houses in the old ways, out of the very earth itself, and living together like in the old days, by recreating villages.

It is a sprawling film, shot on location from the West Coast to West Africa. An audiovisual manifesto filmed over the course of 4 years and 4 continents, FIRST EARTH makes the case that earthen homes are the healthiest housing in the world; and that since it still takes a village to raise a healthy child, it is incumbent upon us to transform our suburban sprawl into eco-villages, a new North American dream.

Chocking up over 300,000 hits on YouTube even before its official release, FIRST EARTH is not a how-to film; rather, it’s a why-to film. It establishes the appropriateness of earthen building in every cultural context, under all socio-economic conditions, from third-world communities to first-world countrysides, from Arabian deserts to American urban jungles.

In the age of environmental and economic collapse, peak oil and other converging emergencies, the solution to many of our ills might just be getting back to basics, focusing on food, clothes, and shelter. We need to think differently about house and home, for material and for spiritual reasons, both the personal and the political.

A message from the filmmakers
Because we believe that as many people as possible should have the option of seeing the FIRST EARTH film, regardless of their financial abilities, for a limited time only we are making beta versions of the 12 chapters of the film available over the internet for free! The DVD version of the film has high-quality video and audio and includes over 100 minutes of extras.

FIRST EARTH has been transcribed into 12 different languages so far, with subtitles added for your convenience. Click on the language of your choice to watch the film in its entirety.