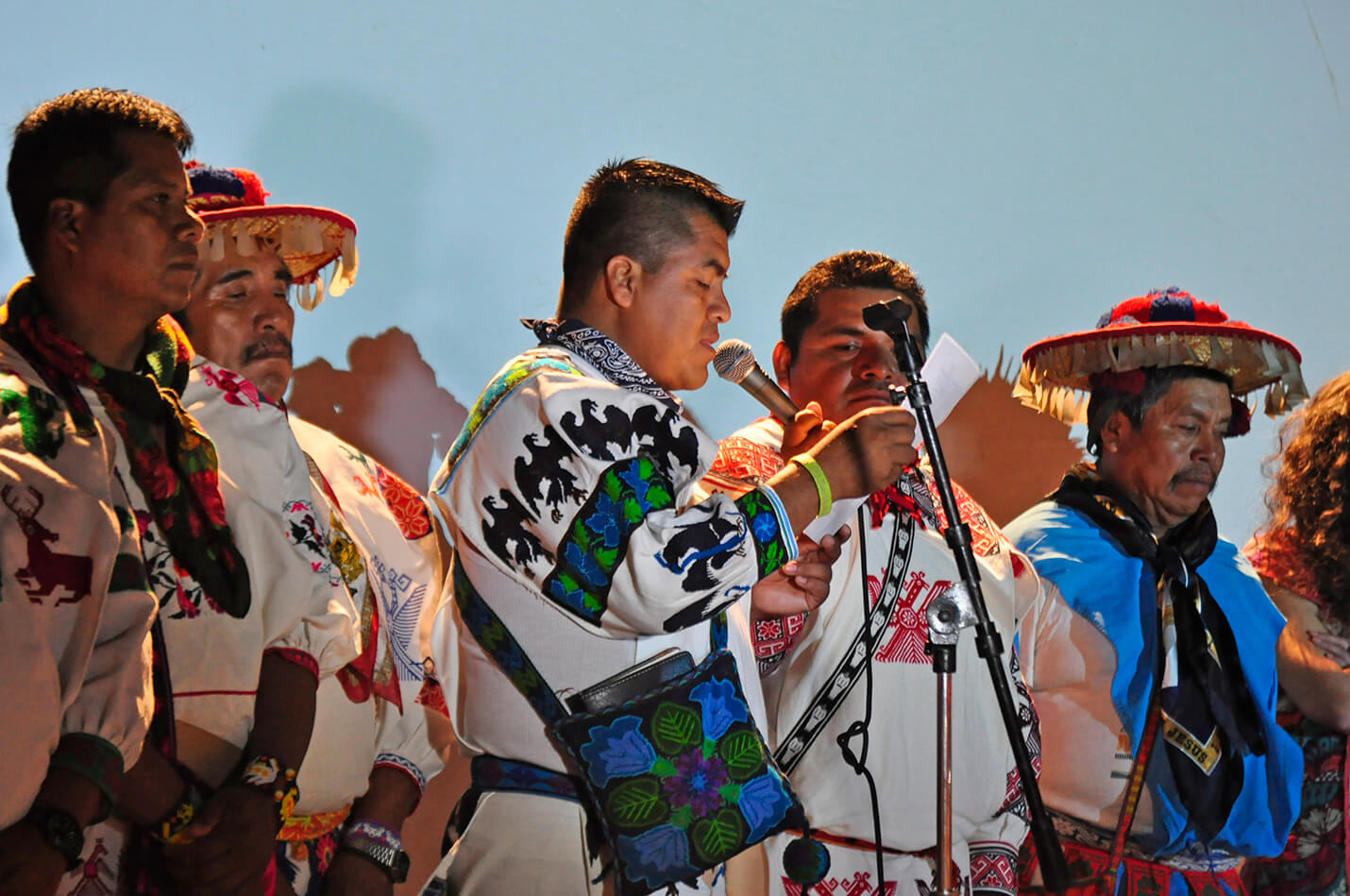 Flanked by authorities from all of the major Wixarika territories, Wixarika attorney and leader Santos de la Cruz reads a letter to President Enrique Peña Nieto at a gathering of 3,000 people on Mexico City's Zócalo before the screening of the film "Huicholes: The Last Peyote Guardians."
Support our journalism. Become a Patron!

MEXICO CITY – A powerful new full-length feature film about the Wixarika People’s struggle to save their most sacred site from exploitation from Canadian mining companies has become the cutting edge of that movement as its director and protagonists prepare to make their way to Europe, the United States and Canada.

As part of the opening of the Festival of Indigenous Cultures of Mexico City, “Huicholes: The Last Peyote Guardians” was screened last week in the Zócalo, in the historic heart of the city, with 3,000 people attending. The film was presented by traditional Wixaritari (Huichol) authorities from all of the major Wixarika territories, as well as the Wixárika Union of Ceremonial Centers and the Wixárika Regional Council for the Defense of Wirikuta. They were joined by members of the production crew and members of the Ramirez family, featured in the film.

The vast diversity of attendees from indigenous and non-indigenous cultures was a dream come true for the producers of the documentary. “We were amazed and heartened to see this most emblematic of spaces in Mexico filled to overflowing with people from many cultures and from all walks of life,” said film producer Paola Stefani, who organized the event. “It was very important for us as producers of this documentary to have the backing and support of all the traditional and agrarian authorities of the Wixaritari communities. After the Zócalo we’re really happy and excited and full of energy to keep working for a better world for everybody.”

Meanwhile, backstage, something even more meaningful transpired for the leaders of the Wixarika communities, the film crew and the activists who have been embroiled in this movement for four years. With film director Hernan Vilchez and film protagonist José Luis Ramirez beaming in on a Skype call from Chile, where they were on tour with the film, the diverse and sometimes fractious group hammered out an agreement for the transparent reporting and inclusive spending of the film’s proceeds.

“The idea for this movie was born in an assembly of elders in the Wixarika community of San Andres Cohamiata, so it is fitting that we came together in this way to plan the next steps for the film,” said Vilchez. “What happened in the Zocalo in August of 2014 was quite possibly a first in the history of filmmaking. We’re proud to be working in partnership with the Wixarika People to carry their urgent and very relevant message to the world.”

The film is being used to raise awareness about the threat to the Wixarika people, whose very culture depends on their ability to make their pilgrimages to their sacred sites, to maintain a reciprocal relationship with what they call “the essences of life” that reside in these places. As the Chile tour wound to a close and the planning for the European and North American tours was gearing up, plans for the film went much further. For one thing, there’s the hope that the money raised will be enough to make a meaningful difference back in the communities in Mexico. Proceeds are to be divided between paying for the film production and tour, and supporting sustainable development projects in the communities featured in the film, both to provide a safe alternative to mining and to help keep the Wixarika ceremonial centers alive.

For another, there’s the vision of using the film to draw attention to the epidemic of assaults on indigenous and non-indigenous communities by transnational corporations and unaccountable governments.

“This film is emblematic of what is happening to communities throughout the world – it’s not just about the Huicholes,” explained Vilchez. “Our hope is that we can raise awareness about these issues in Mexico but also in the communities where we are traveling.”

Eduardo “Lalo” Guzmán, a longtime resident and steward of Wirikuta who has been at the forefront of the movement from the beginning, spoke of the parallels to the Wirikuta struggle that are taking place around the globe.

“What’s happening to the Wixarika people is also happening to other peoples around the world – United States, Canada, Guatemala, Chile, and many others. In other places, the people are being crushed, the governments don’t care about the cultures and they violate them. Our government carries the banner of defender of cultures, but they’re not oriented toward the well-being of life, but material gain.”

For Guzmán, the meeting at the Zócalo, which was brought about thanks to the movie, represented a long-awaited union between factions that had long been at bitter odds – both among the Wixarika communities, and among those who have rallied to their defense.

“The fundamental agreement of this meeting is that we will no longer walk separately, but together. And this union will mean the rejuvenation and growth of our movement. Everything that happened in the movie has its base in the fact that we are all united here today.”

For more information about the movie and its purpose, as well as future plans, visit our website, www.huicholesfilm.com/en, and you can follow us on Facebook at Huicholes: The Last Peyote Guardiansand on Twitter at @peyoteguardians. 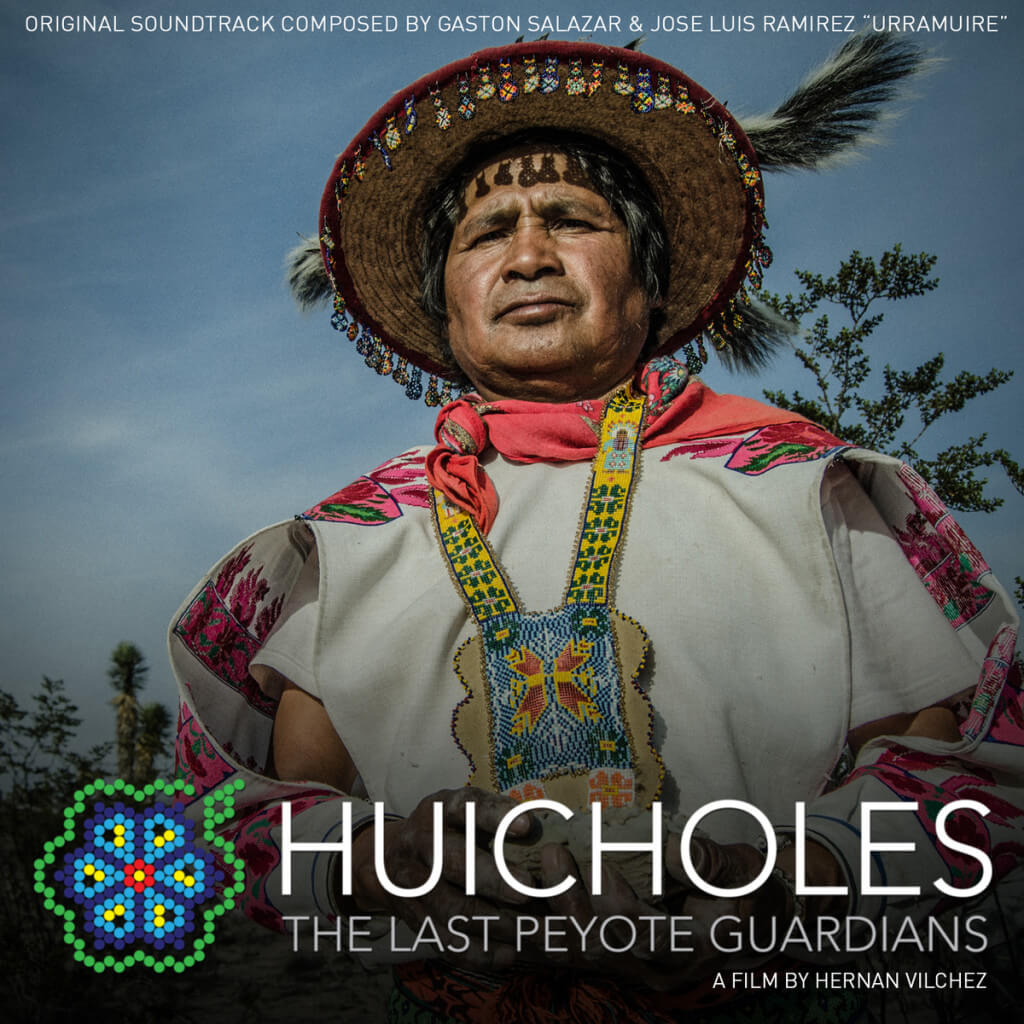