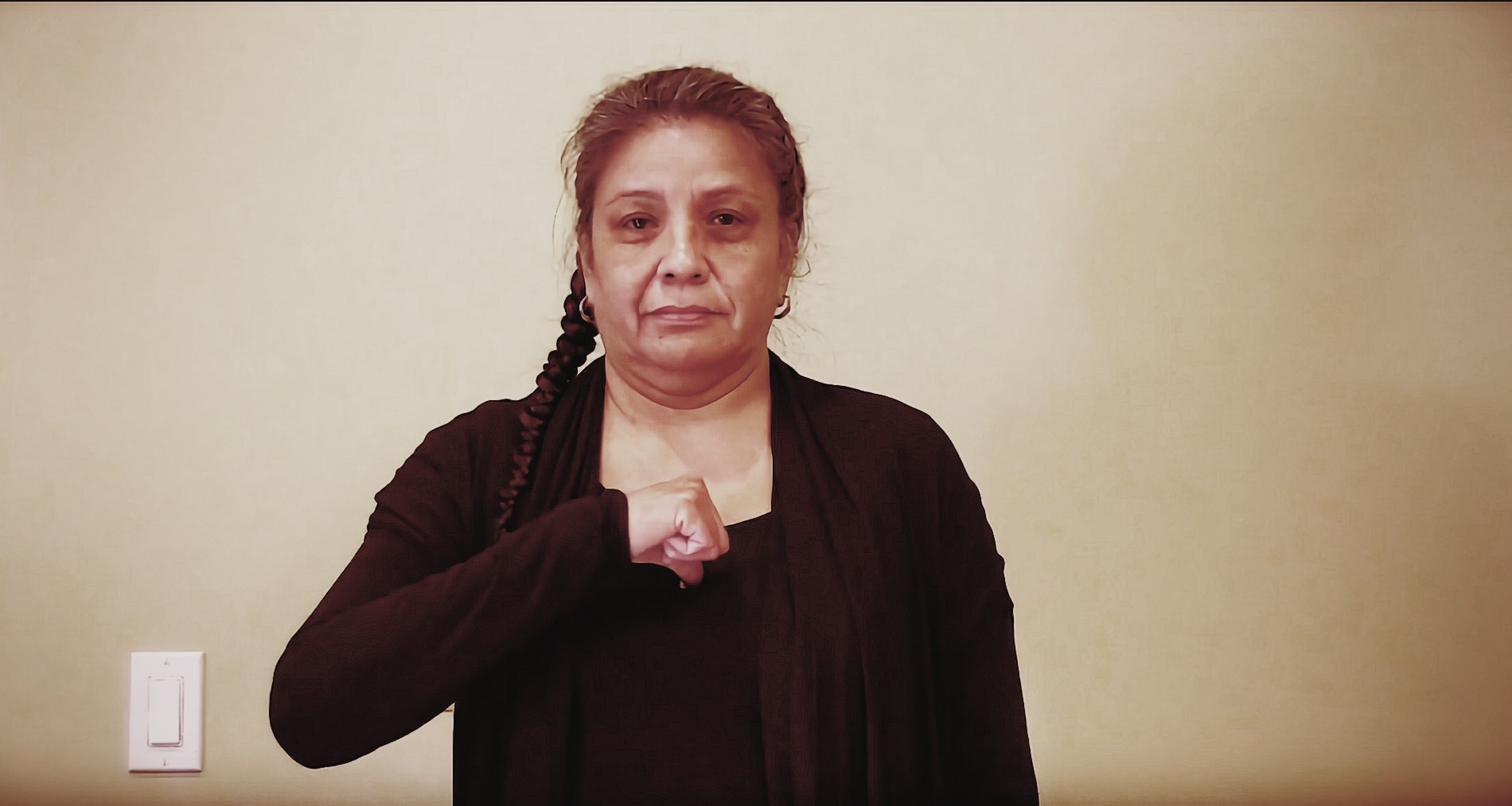 Reconciliation commission called for action to save Indigenous languages — but traditional sign languages are being forgotten.
Credit: YouTube
Support our journalism. Become a Patron!

It’s April 19, and deaf students from across B.C. have come together for a full-day celebration of Indigenous culture. They’ll hoop dance, make art and play traditional games. Deaf Indigenous artists will perform, and lead workshops.

But first, Nikki Sellars of the Xat’sull First Nation, a former vice-president of Deaf Okanagan Society, signs a prayer.

“Creator, we long for the homeless in our families. For honest open communication to say what we need to say in safety and without fear. Creator, we give thanks for the knowledge we get from all traditions of the world. Help us to honour the gifts of all traditions.”

The students raise their hands and shake them, clapping the deaf way.

But although the event celebrated Indigenous traditions, the participants were using American Sign Language (ASL).

Indigenous Sign Language (ISL) — used for centuries and now on the brink of being lost — wasn’t part of the agenda for the event, which was organized by the Provincial Outreach Program — Deaf & Hard of Hearing with the BC Provincial School for the Deaf.

Lynley Lewis, educational consultant with the provincial outreach program, said about 90 per cent of deaf children are born to hearing parents. If hearing loss is less severe, they can choose to go with speech as their child’s main form of communication.

“If it is sign language, instead of the parents teaching the child language, the language is taught to the child through professionals in the field,” said Lewis. “So you can see how different the situation is, when a language that you want for your child is taught by a stranger.”

For Indigenous children, the difference is even greater.

Many of the students attending the BC Provincial School for the Deaf — including some Indigenous students — live in the dorm, returning home on weekends if they can.

“What is interesting about this is that you have Indigenous parents sending their kids to residential school,” said Lewis. “Some of the parents don’t have the resources at home to teach the language and their child needs to learn sign language.”

For the most part, Indigenous communities are not able to provide those resources today.

Before colonization, they could. Indigenous Sign Language — in various forms — was used across North America. Most communities had role models and teachers, deaf and hearing, for young deaf people.They could also share their experiences with peers.

But Indigenous Sign Language is on the verge of extinction, as ASL becomes dominant.

Darin Flynn, professor of linguistics at the University of Calgary, says the extinction of Indigenous Sign Language is similar to the loss of Indigenous spoken languages.

Jeffrey Davis, professor of linguistics at the University of Tennessee, has spent his life studying Indigenous Sign Language — and watching it be pushed to the brink of extinction as American Sign Language became the standard.

“It is sad. These languages can die. Whenever a language dies, something is a problem in that place,” said Davis. “Languages are part of the environment. Part of the history and culture. We want to save different species like trees and plants. Have them saved, not destroyed. But let’s not forget the language is like that too.”

Martin Heavy Head Jr., a member of the Blood tribe of the Blackfoot Confederacy, sees Indigenous Sign language as a link to traditional culture.

“To me it is a nice connection with life before colonialization. It is something very direct. I know when I make these signs, that these are signs that my ancestors thousands of years [ago] were using, too. That feels pretty good,” Heavy Head said.

Endangered, but not dead

Max and Marsha Ireland live near London, Ont. They are Haudenosaunee Shawnee of the Six Nations Iroquois, which include the Oneida Nation.

Marsha is a deaf member of the Turtle Clan and will turn 60 in December. Max is 59 and a Bear Clan member. Together they have five children. Four are totally deaf, and one can hear with a hearing aid. They have nine grandchildren. Seven are deaf and only two can speak and hear.

With the help of Elder Olive Elm, the couple has come up with 250 signs, a 13-letter alphabet (just like spoken Oneida) and signs that let people count up to 100. They are determined to create an Oneida Sign Language based on Plain Indigenous Sign Language once widely used by Indigenous people, not ASL.

“It is a combination of reviving and expanding. A connection with the spoken-word Oneida. So we are developing signs that go with that. We have also included some earlier Plain Sign Language to be incorporated with that as well,” said Max Ireland.

Due to their work, the Irelands have met Indigenous people from Ontario, Quebec and B.C. Some remembered their Elders using sign language.

“Like our own spoken language, it is not being promoted and used the way it should be.”

Indigenous Sign Language provides deaf First Nation individuals with a chance to participate in the community and connect with their Indigenous spoken language, he said.

In February the Irelands travelled to Ottawa. The government plans an Indigenous Language Act to preserve and revitalize traditional languages, and was holding consultations.

The Irelands told the government that sign languages should be part of the initiative.

“An Elder lady came and spoke to us,” Max Ireland said. “She said ‘Thank you for opening my mind, my eyes, my ears and my heart to a portion of the population that throughout this language meeting we have been having we didn’t even consider.’”

The Assembly of First Nations (AFN) is working with the government on the Indigenous Language Act. The AFN’s bilingual communications officer Monica Poirier said the issue of ISL did came up in its outreach and engagement with First Nations and will be part of the discussions as the assembly co-develops legislation in support of Indigenous languages.

The AFN’s Report on the National Engagement Sessions from Dec 5, 2017, calls for the “right of access to language in sign languages, and language for all individuals with disabilities or special abilities.” It also notes the need to fund “sign language programs and programs to support individuals with disabilities or special abilities.” And the report cites the development of Oneida Sign Language in Ontario as a “fantastic example of innovation.”

But it doesn’t specifically call for the new legislation to recognize the importance of Indigenous Sign Language.

That’s wrong, said Frank Folino, president of the Canadian Association of the Deaf. ISL should be included in the Indigenous Language Act, he said, in part because the United Nations Declaration on the Rights of Indigenous Peoples and the UN Convention of the Rights of Persons with Disabilities both recognize their right to preserve their cultural identity as both deaf and Indigenous.

“Indigenous languages are still at the bottom,” said Galla. “There is really almost no funding.”

She agrees that communities have a responsibility to promote Indigenous languages, but says governments needs to step up in response to the Truth and Reconciliation Commission’s calls to action, which urged more effort to protect and expand the use of Indigenous languages.

But Indigenous Sign Language isn’t even mentioned in the plan.

Henry said that shows a colonial view of which language and knowledge counts.

“Because these communities are so small they are basically likely to disappear at some point unless something is done,” said Henry who is also a researcher at UBC’s Social Justice Institute.

Now she’s in southern Ontario, where the Oneida Nation is hosting an Indigenous deaf gathering to share experiences and build community. Sellars, who teaches ASL at the Esquimalt Recreation Centre and founded the BC Hummingbird Society for the Deaf to advocate for the province’s deaf and Indigenous people, was the only one attending from B.C.

“It is important for all Indigenous deaf to have full knowledge and understand about their own tribal treaty rights and encourage them to use their own Indigenous sign language,” she said.

The Indigenous Language Act is expected to be released in mid-September. But whatever it includes, Sellars says hard work will be needed to rescue ISL.

“It will take several months for us to document, create and travel around B.C. meeting individuals from each community documenting their sign language. What they use in their community. It won’t happen overnight,” said Sellars.

The First Peoples Cultural Council is a First Nations-run provincial Crown corporation with a mandate to support communities in documenting and restoring their languages.

This article was originally published in The Tyee. It has been re-published at IC with permission. Read Part One here.