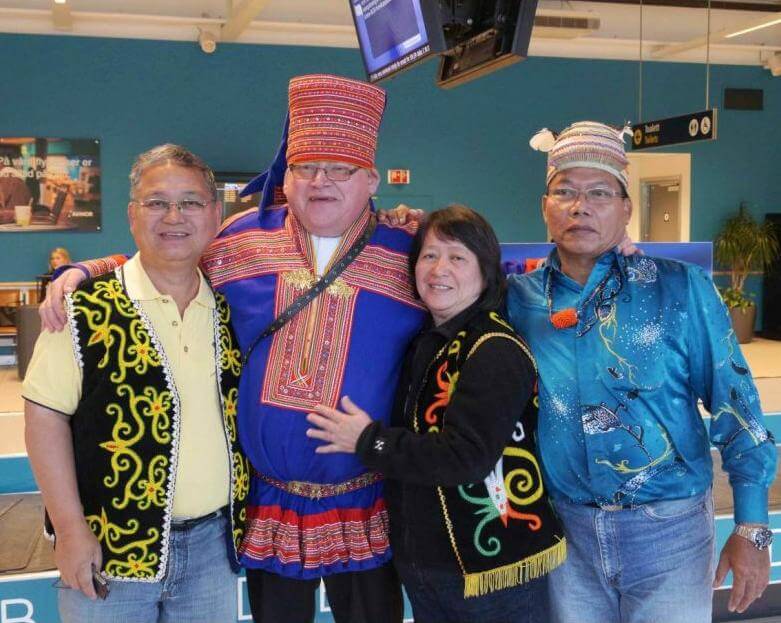 ALTA & KARASJOK, Norway, May 26, 2014 – The Malaysian anti-dam coalition, SAVE Rivers, visited the controversial Alta Dam in the North of Norway late this week. The Alta Dam faced strong opposition in the late 1970s and 1980s by the indigenous people of the Sami.

SAVE Rivers’ three-person delegation is chaired by SAVE Rivers Chairman Peter Kallang and comprises Maria Ajang from Long Palai and Lah Jok from Long Liam, two villages affected by the planned Baram Dam.

Tore Bongo, one of the leaders of the uprising, advised SAVE Rivers in solidarity with their current struggle against Sarawak’s twelve planned dams: “You must not be afraid to fight. You need to be willing to negotiate, but above all, you need to fight.”

Sami representative Tore Bongo said the struggle against the Alta Dam went down in history as a turning point in the Norwegian government’s policy towards the Sami. First of all, the size of the dam was considerably reduced and no village was flooded. Second, after the uprising, the government started to respect the Sami’s rights as indigenous people.

Many new laws have been established since the Alta struggle, allowing the Sami to live and develop their culture and traditions. In 1989, the Sami established their own Parliament in Karasjok.

Sami Parliament representative, Silje Karine Muotka, gave the Malaysian delegation a special reception and a tour through the parliament building.

Maria Ajang from Sarawak expressed her admiration for the Sami’s struggle: “I am impressed how strongly the Sami have fought for the protection of their culture, language and land. They have never hesitated, but fought for their future.”

The exchange between the natives from Sarawak and Norway was perceived as very fruitful on both sides. Indigenous peoples in both countries have faced similar threats to their land, tradition and culture. In Norway, however, things have changed to the better for the Sami, while the traditional livelihoods of Sarawak’s indigenous peoples remain precarious and discriminated.

Peter Kallang, Chairman of SAVE Rivers, commented the situation of Norway’s indigenous people positively: “The Norwegian government is seriously committed to protect the culture and the rights of the Sami who are a minority. The government really allows the Sami to determine their way of life.”

Sarawak representative Lah Jok made his demand clear: “The Malaysian government should respect the rights of the indigenous peoples just as the Norwegian government does.”

The visit to the Alta Dam and the meeting with the Sami marked the end of SAVE Rivers’ two-week-tour through Europe which successfully highlighted the plight of Sarawak’s indigenous people against twelve planned dams in Borneo.