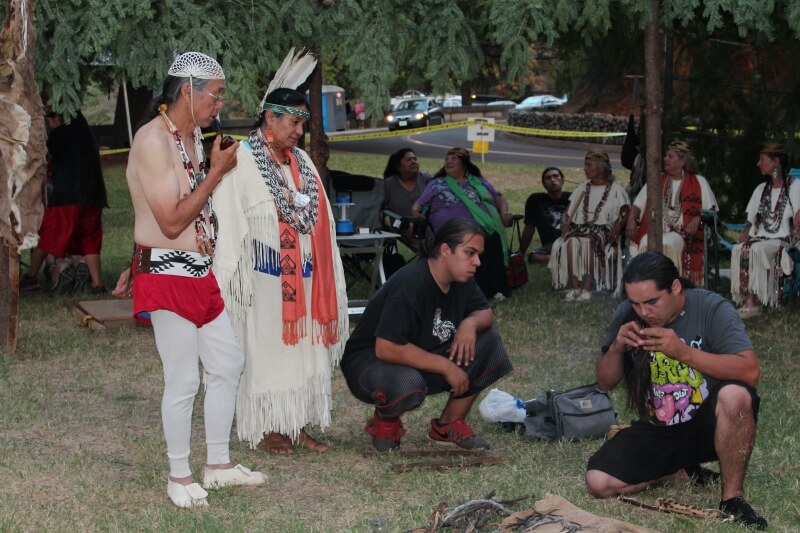 The Winnemem Wintu Tribe, fishing groups and environmentalists have been fighting a federal plan to raise Shasta Dam for many years, since the 18-1/2 foot proposed dam raise would flood many of the Tribe’s remaining sacred sites and further imperil salmon and steelhead populations on the Sacramento River.

“Any raising of the dam, even a few feet, will flood some of our last remaining sacred sites on the McCloud River – sites we still use today,” said Caleen Sisk, Winnemem Chief and Spiritual Leader. “We can’t be Winnemem any place else but the McCloud River. The dam raise is a form of cultural genocide.”

“We pray that the spirit beings hear us and bring all of our helpers, from the high mountain meadows all of the way to the ocean,” she stated before the war dance began. “Our concern is the health of the waterways. We are here at the dam that blocks the salmon on a river that should be full of salmon.”

She described Shasta Dam as “a weapon of mass destruction” against the Winnemem Wintu and said the idea of dams is a “horrible archaic project.”

The campaign by the Tribe and their allies to stop Shasta Dam from being raised received a boost when the U.S. Fish and Wildlife Service recently issued a revised draft report on the proposed enlargement of the dam revealing how the dam raise will indeed harm salmon populations.

The report, obtained through a Freedom of Information Act (FOIA) request, concluded that it cannot support any of the proposed action alternatives, including the preferred alternative presented by the U.S. Bureau of Reclamation, the federal agency that controls and operates the dam.

The Bureau of Reclamation (BOR) issued a controversial draft Environmental Impact Statement (DEIS) on dam enlargement in 2013. “The project must be approved by Congress – and justified by both economic and environmental rationales,” according to a joint news release from the California Water Impact Network (C-WIN) and the California Sportfishing Protection Alliance (CSPA). Taxpayers would pay for two-thirds of the $1.1 billion project.

In an earlier cost/benefit analysis, BOR determined that payments by Central Valley Project water and power customers alone would provide minimal justification for the project economically. Consequently, 61% of the “economic justification”‘ now touted by the agency is a larger cold water pool behind the dam to “improve” Sacramento River salmon survival during critically dry years, the groups said.

In response, the U.S. Fish and Wildlife Service (USFWS) stated in its recent draft report that the project is not justifiable because it provides no net benefits to salmon, and will result in negative environmental impacts that cannot be mitigated.

“The limited benefit derived from dam enlargement and the preferred alternative CP4A during dry and critically dry years will likely be offset by river conditions downstream of RBPP (Red Bluff Pumping Plant) in the mainstem Sacramento and the Delta,” the report stated. “The enlargement of Shasta Dam and the water management scenario described for CP4A will reduce the rearing capacity of the Sacramento River for juvenile salmonids by further altering the natural successional process of riparian forest habitat, and by reducing juvenile salmonid access to the high quality rearing habitat found in floodplains and bypasses because of reduced high water flow events.”

Tom Stokely, water policy analyst for the California Water Impact Network, commented, “This report documents the Bureau of Reclamation’s own data that shows the project will not benefit salmon in the Sacramento River. We knew all along that the Bureau of Reclamation had a phony economic justification to enlarge Shasta Dam. Now we have another federal agency agreeing with us.”

Stokely said it is clear that any water that would result from the enlargement of the dam “is intended for the poisoned lands of the Westlands Water District south of the Delta. This is just another deception by BOR to provide more subsidized water under the guise of a public benefit.”

The USFWS report further stated that the Bureau of Reclamation would have considered several options that were removed early in the consideration process if salmon restoration had been a true priority.

Those actions include repairing the multi-million dollar Shasta Dam temperature control device; restoring the riparian corridor along the Sacramento River; operational changes to Shasta Dam to increase cold water storage and increase minimum flows; increasing water use efficiency in local canals; and considering conjunctive use of other existing and planned water storage facilities in the Central Valley.

“It’s instructive to note that all these actions would cost a fraction of dam enlargement,” said Bill Jennings, Executive Director of the California Sportfishing Protection Alliance. “This isn’t just an environmental and fisheries issue. It’s about the squandering of taxpayer dollars. It’s about pork barrel politics, about public money flowing from the public coffers to the handful of corporate farmers in the San Joaquin Valley who control water in California.”

Responding to the report, Chief Caleen Sisk said, “While the US Fish and Wildlife biologists are on track, they offer no resolve as to a ‘fix.'” She criticized the agencies for refusing to include the Tribe in efforts to restore wild salmon.

“So far the US Fish and Wildlife Service, NOAA and BOR have not included the Winnemem Wintu Tribe in the solutions to address the wild Chinook,” Sisk emphasized. “There are no studies, that I am aware of, that address the flooding of salmon spawning grounds, unless they have finally realized that the raise of Shasta Dam will flood the Sacramento River, McCloud River, and Squaw Creek. These are all possible rich spawning waters that will be flooded by the 18.5’ raise.”

“Perhaps the BOR is now being held accountable for more than the ‘cold water pool’ to help salmon,” she said. “The Shasta Dam raise EIS cites no effort to provide a swimway passage for the wild winter run and all runs of Chinook, nor makes any effort to assist salmon in the mountain waters.”

The Tribe has been trying for years to restore winter run Chinook to the McCloud River above Shasta Lake by reintroducing the original strain of winter Chinook that are now thriving in the Rakaira and other rivers in New Zealand, but the federal agencies have to date refused to back their efforts.

“There is no effort to work with the Indigenous Peoples of the McCloud River Watershed,” said Sisk. “The BOR’s plans for wild winter run Chinook fall desperately short of a real viable production of salmon.”

She concluded, “The Winnemem Wintu stand ready to assist as soon as Sue Fry of the Bureau of Reclamation will allow us to participate in the plan.”

Steve Martarano, USFWS spokesman, noted that the report “is in a draft format and its subject to revision.”

“It’s not a formal document,” said Martarano. “There is still back and forth between the Bureau and U.S. It has been reviewed at the staff level, but hasn’t been reviewed by the top management.”

“The report speaks for itself. We had concerns and those are being addressed,” he concluded.

Jennings confirmed that the report is only a revised draft, and feared that it could be “steamrolled” by the Bureau and politicians controlled by corporate agribusiness.

“Given the political implications of the report, CSPA is very concerned that it may be rewritten by Obama Administration political appointees who support enlargement of Shasta Dam,” he said.

The USFWS and Bureau said there is no estimated date when the USFWS report would be finalized – nor when the final environmental impact report on the dam raise proposal would be released.

Jennings added that the Bureau of Reclamation’s “egregious dishonesty” in spinning the “benefits” of enlarging Shasta Dam also calls into question the economic justification for other new or enlarged dams planned for California, including Sites Reservoir and Temperance Flat.

Jennings said both these projects may be eligible for funding under Proposition 1, Governor Jerry Brown’s water bond that the voters approved in November. The Winnemem Wintu Tribe, California Sportfishing Protection Alliance, California Water Impact Network and other Tribes and organizations opposed Prop. 1, while agribusiness, the oil industry, Big Tobacco, corporate environmental “NGOs,” timber barons, billionaires, other corporate interests and the Governor spent over $16.4 million to pass the bond.

But Stokely emphasized, “the evidence is increasing that they’re economic and environmental boondoggles, and will provide little if any benefit in mitigating the state’s water crisis.”

“The Stanford Woods Institute recently came out with a study stating that underground storage is six times more cost effective than surface storage,” Stokely said. “Obviously, destructive and expensive infrastructure projects are the wrong track. The U.S. Fish and Wildlife Service had the guts and integrity to say as much. We applaud them for it.”

The Stanford Woods Institute report on underground storage costs compared to surface storage can be found at http://waterinthewest.stanford.edu/sites/default/files/Storing_Water_in_CA.pdf

For more information, go to: