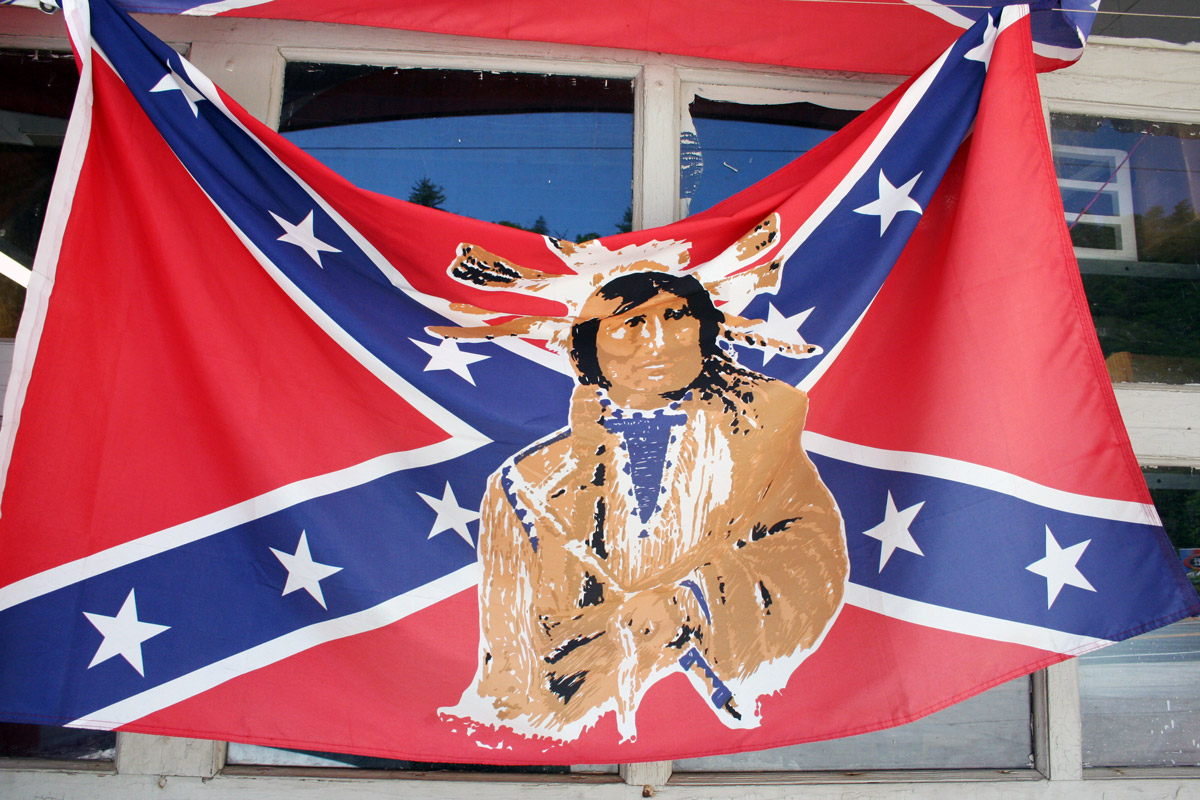 Just minutes before a massacre at an El Paso, Texas, Walmart earlier this month left 22 people dead, a hate-filled anti-immigrant manifesto appeared online. In it, the author, whom authorities believe to be the alleged shooter, claims to be defending his country from white American “replacement” and an “invasion” at the U.S. border as well as from environmental destruction and corporate power.

“Some people will think this statement is hypocritical because of the nearly complete ethnic and cultural destruction brought to the Native Americans by our European ancestors, but this just reinforces my point,” reads the manifesto. “The natives didn’t take the invasion of Europeans seriously, and now what’s left is just a shadow of what was.”

For decades now, warped ideas about Indigenous struggles have buoyed conservative rhetoric and white nationalist fantasies and been used to justify racist violence. And while the far and extreme right share a hollow, disingenuous affinity with Indigenous people, their appropriation of Indigenous victimhood and rights language is providing long-burning fuel for everything from right-wing propaganda on Fox News to extremist manifestos and movements worldwide.

In 2011, for instance, a far-right terrorist in Norway killed eight people in a bombing and another 69 at a youth camp. In his 1,500-page manifesto, the killer argued that the rhetoric of white nationalism was ultimately doomed to fail due to its connections to Hitler. Instead of using language and ideas associated with Nazis, the author chose to exploit an “untapped goldmine” of Indigenous rights language. “We are no more terrorists than Sitting Bull, Crazy Horse or Chief Gall who fought for their people against the imperialist General Armstrong Custer,” reads the manifesto. “Our struggle will be a lot easier if European nationalist use smart and defusing arguments instead of using supremacist arguments which can be efficiently squashed through psychological warfare propaganda or by anti-Nazi policies.” To the author, embracing the language of Indigenous rights and victimhood was a softer, even sympathetic, strategy that would embolden efforts to reclaim European land and culture from immigrants.

A few months after the Norway attack, a German far-right anti-immigration propaganda video uploaded to YouTube featured a Green Party politician and a stereotypical “Cherokee” Indian maiden, a foreign exchange student who hopes to become a naturalized German citizen. The politician quickly obliges — a dig at the party’s “multicultural ideals” — and the maiden tells a story about the massacre of her people by European immigrants who were allowed to settle the land by traitors in her tribe. The righteous xenophobia revealed here has plenty of company: In 2014, the Alternative für Deutschland (AfD), another far-right German nationalist party, echoed the same sentiment in a meme of Hunkpapa Lakota Chief Sitting Bull, with a caption that warned: “Indians could not stop immigration. Now they live on reservations.”

“Nowadays, you see internet memes and videos on YouTube of people who tell the story of the conquest of North America and who skew historical references,” said Frank Usbeck, curator for the Americas at the State Art Collections in Dresden and former professor of American Studies at the University of Leipzig in Germany. “ ‘Look at the Native Americans who invited the foreigners as refugees.’ ”

Usbeck, who has studied the links between Indigenous people and white nationalists for years, began by examining the relationship between German perceptions of Native Americans and the Völkisch Movement’s “blood and soil” ideology, which has roots in the 19th century. “Constructing a national identity among Germans seems to have had strong roots in identifying with Native Americans and also setting oneself aside from many other Europeans,” said Usbeck, adding that this need to belong to the land and to connect with an “Indigenous” identity can be traced to early German nationalist studies of pre-Roman Germanic tribes.

Before and during World War II, Nazi propaganda declared American cultural imperialism a threat to German culture, noting that it had destroyed the Native American way of life and comparing U.S. bombing campaigns in German cities to American frontier massacres. Usbeck calls this “co-victimization” — an invented affinity with the Native American experience of genocide and cultural loss, rhetorically linked to ideas of German victimhood. The Nazis thereby used Indigenous people to create a myth of survival, of a people fighting heroically for their homeland.

And Indigenous people remain potent symbols of outsider oppression for far-right extremism globally. In 2013, in Greeley, Colorado, anonymous citizens bought two billboards that espoused pro-gun propaganda with the image of three armed Native Americans. The text reads: “Turn in your arms. The government will take care of you.” Ammon Bundy’s 2016 anti-government militia takeover of the Malheur National Wildlife Refuge even tried to appeal to Native Americans: “We’re reaching out to the Paiute people, in the sincerest manner that I can,” said Robert “LaVoy” Finicum, a spokesman for Citizens for Constitutional Freedom, in a video posted to YouTube. (Finicum was later killed by law enforcement at a traffic stop during the occupation.) He continued, “Any claims that they (Paiutes) may have upon the lands, let’s begin that dialogue.” But the Burns Paiute Tribe quickly denounced the Malheur militia members for mishandling tribal artifacts and traditional land.

Earlier this year, a video featuring white supremacist Jared Taylor trod the same ground. “The story of the Indians is one of the strongest possible arguments for tight borders. Immigration, or more accurately, the arrival of European pioneers was a disaster for the Indians,” said Taylor. “We took their land, destroyed their way of life and put them on reservations.” The video ends with a final thought: Indians fought for their land, so why can’t whites do the same?

In the early days of U.S. colonization, white settlers waged numerous wars to displace Indigenous people. “This idea of making (colonial) invasion look like self-defense goes all the way back to the Declaration of Independence, where the British colonists, who were declaring independence from the crown, were simply making the argument that they were defending themselves against merciless Indian savages,” said Nick Estes, author and assistant professor in the American Studies Department at the University of New Mexico. “The El Paso shooter was referencing Native people as a heroic defense against invasion, when he himself was waging a kind of a terror campaign against actual Indigenous people who are crossing the border.”

The suspected shooter also allegedly wrote that the destruction of the environment led corporate interests would limit available resources for whites, echoing the manifesto of the shooter who killed 51 at mosques in Christchurch, New Zealand, in March 2019, who considered himself an “eco-fascist.” Historian and author Roxanne Dunbar-Ortiz says this anti-capitalist environmentalist rhetoric is designed to reach readers beyond already-sympathetic audiences. “He hits on certain tropes that make him somewhat sympathetic to Native Americans, and he talks negatively about corporations controlling everything,” said Dunbar-Ortiz. “It is a very manipulative manifesto by a very rational guy.”

The manipulation of Indigenous struggle and victimhood has been a part of white supremacists’ modus operandi in Europe for decades. Now, white male gunmen in the U.S. are now picking up the mantle.

“Hate groups have co-opted historical U.S. symbols in a weak attempt at tearing down any progress we’ve made toward including people of all races, creeds and backgrounds as true Americans,” said Keegan Hankes, senior analyst at the Southern Poverty Law Center, a nonprofit that tracks hate groups and far-right extremism in the U.S.

The El Paso shooter’s manifesto is the most recent anti-immigrant, hate-filled document to actually culminate in enormous violence. But since the shooting, the Guardian reports that police have thwarted seven similar plots by far-right extremists with racist ideologies.

“The idea of a parallel people aggressively taking land, taking whole swaths of territories — Mexicans coming in don’t have any power to do any of that,” said Dunbar-Ortiz. “It’s really obscene that he really is framing things that are completely different.” It’s unlikely that the El Paso shooting will be the last white supremacist attack in the name of an imaginary immigrant invasion, nor the final use of Indigenous victimhood in a hate-filled manifesto.

Note: This article has been updated to reflect that Robert “Lavoy” Finicum was killed during a traffic stop and not during a siege.

Kalen Goodluck is an editorial fellow at High Country News. Email him at kalengoodluck@hcn.org or submit a letter to the editor.

This article was originally published by our media partner, High County News. It has been re-published at IC with permission.