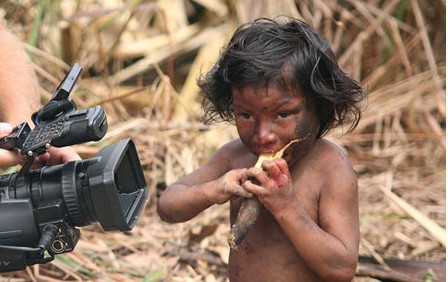 Survival International is calling attention to a “faked” film, currently available on youtube, that’s leading people to “hate Indians and wish them dead.”

“The film, ‘Hakani’, has been watched by more than 350,000 people on YouTube and claims to be the true story of a Brazilian Indian child buried alive by her tribe,” explains Survival. However, “[we argue] that the film was faked, that the earth covering the children’s faces is ‘actually chocolate cake’, and that the film’s claim that infanticide among Brazilian Indians is widespread is false.”

What’s more, the film is inciting racism and hatred towards Indigenous People. “‘People are being taught to hate Indians, even wish them dead,’ says Survival’s director, Stephen Corry, in an exclusive interview about ‘Hakani’. ‘Look at the comments on the Youtube site, things like, ‘So get rid of these native tribes. They suck’, and, ‘Those amazon mother f***ers burrying (sic) little kids, kill them all.'”

“‘The film focuses on what they claim happens routinely in Indian communities, but it doesn’t,’ Corry says. ‘Amazonian infanticide is rare. When it does happen. . . it is the mother’s decision and isn’t taken lightly. It’s made privately and secretly and is often thought shameful, certainly tragic.'”

“Hakani” was directed by David Cunningham, the son of the founder of an fundamentalist missionary group based in the US, called “Youth with a Mission.” They have a branch in Brazil under the name “Jocum”.

It is assumed that the film’s purpose is to raise awareness of child abuse and to help protect children’s rights. But it is more likely aimed at bolstering support for a racist piece of legislation known as “Muwaji’s law.”

Proposed in 2007 by another missionary group, Muwaji’s law aims to provide the state with unlimited free access to indigenous territories, and to legally obligate indigenous people to denounce anyone who is or who “may be” harming children.

It could also mark an end to Indigenous cultures – a prospect that most certainly appeals to various government officials, land owners and foreign investors ion Brazil. Many of them already view indigenous people like they are “state property” and even “museum exhibits”.

Youtube has been known in the past to removed videos hosted on their site for promoting racism and other forms of hatred. While “Hakani” is not an overtly racist film, is does promote a racist agenda, and it is inciting racial hatred.

It’s also presented as a true story, when it is fact, completely false. “Even the missionaries who produced it ‘admit there is no way to verify what they say happened’.”

Suggested action: (1) Login to youtube and repsond to the comments. Inform people of the facts (It’s fake!!!!) (2) Contact Youtube and request that the video be removed.