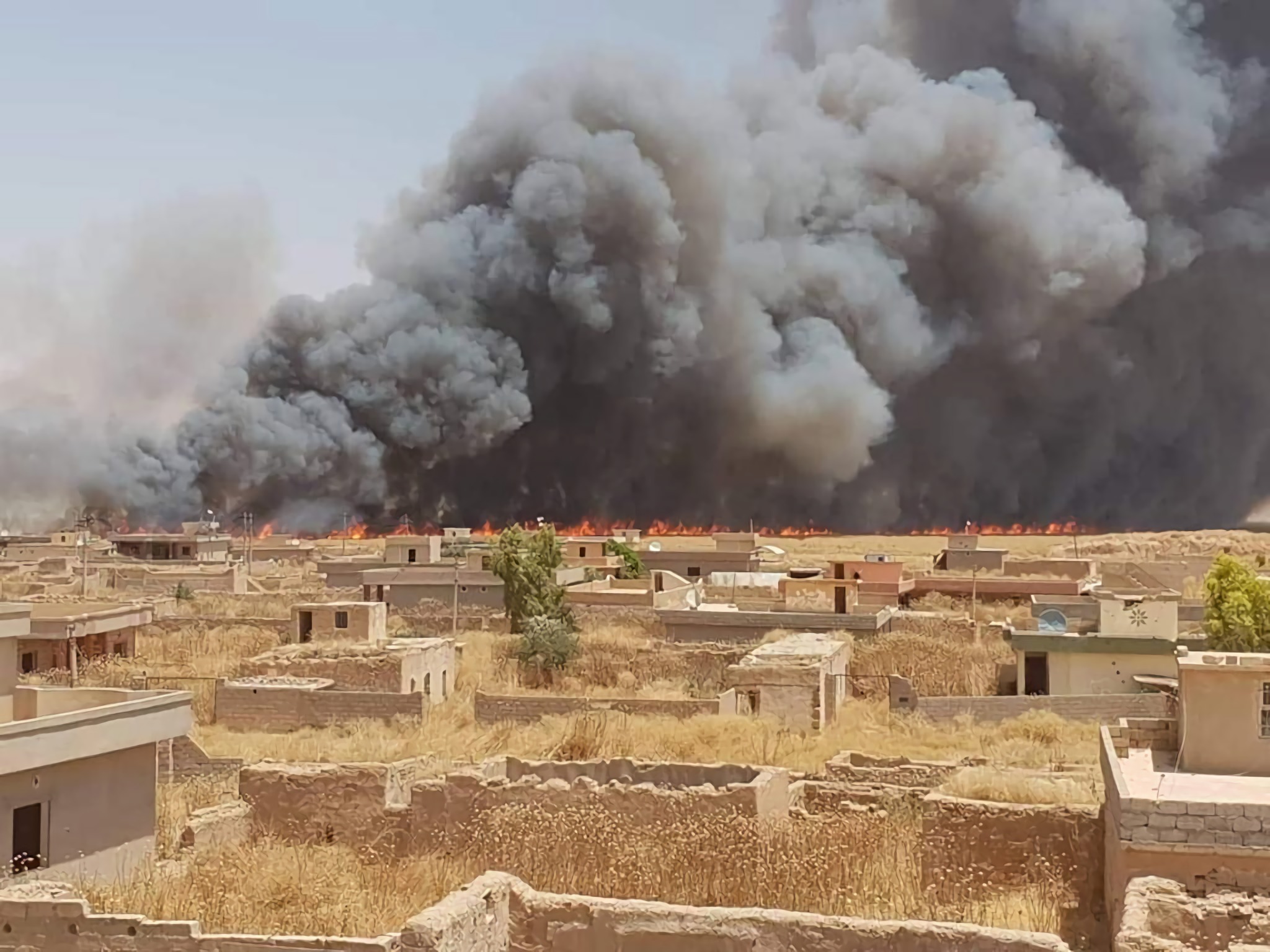 Fires deliberately set by militants burn Yezidis’ bumper grain crops
The genocide-hit village of Kocho south of Shingal is among the Yezidi villages that have been affected by a devastating fire destroying crops, livestock and farm machinery.
Support our journalism. Become a Patron!

Shingal, Ezidikhan – A sudden and mysterious wave of fires, blamed on the Islamic State, has been burning tens of thousands of acres of Yezidi cropland, destroying a rare bumper crop of wheat and barley and threatening the already impoverished families and their livestock with starvation.

For the first time in a decade, farmers were expecting a bumper harvest. Fields of golden wheat rippled across the most fertile area of the region that in centuries past served as the breadbasket of the known world.

Starting in early May, tens of thousands of acres of farmland have been burned across an expanse of territory stretching from the Iranian border in the east to near the Mediterranean coast in the west. The scorch marks across the landscape are visible from satellites. 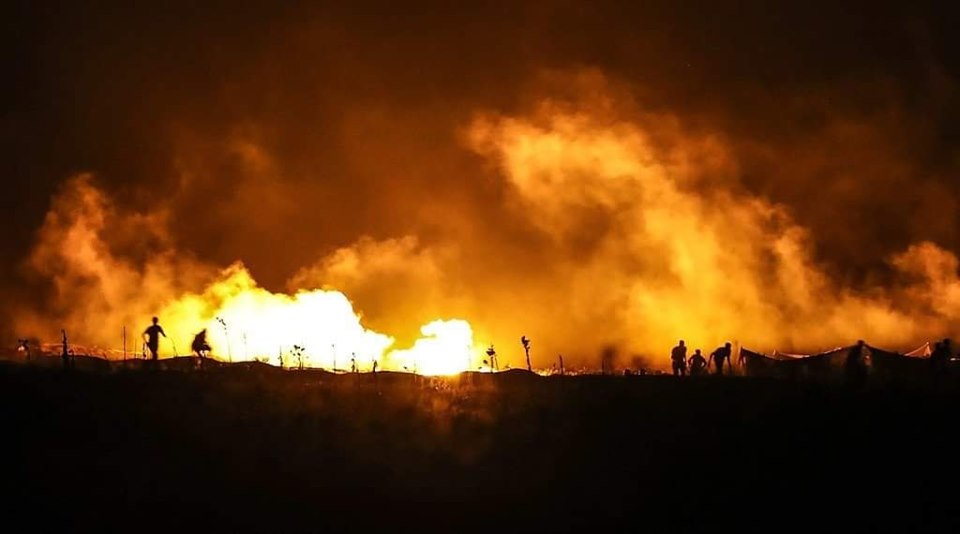 Farmers say many of the fires were started deliberately

Iraqi troops have been evacuating civilians from Kocho and other areas of Shingal, according to Ezidi Press. Several villages are in danger of being completely surrounded by the flames.

Farmers say many of the fires were started deliberately by insurgent groups, including remnants of the Islamic State (ISIS), after landowners refused to pay taxes to the group.

ISIS has claimed responsibility for several fires across Iraq on its media channels, claiming it is targeting the farms of “apostates” and those who collaborate with Iraqi security forces. 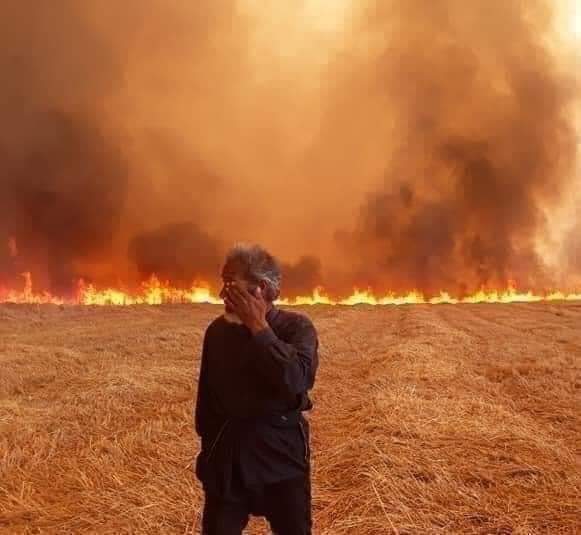 The Islamic State has claimed responsibility for the earliest of the fires and urged its followers to ignite more. “The harvest season is still long, and we tell the soldiers of the Caliphate: you have before you millions of dunams of land planted with wheat and ­barley, which are owned by apostates,” said the statement published by the Islamic State’s al-Naba newsletter, exhorting supporters to set more fires.

Since the fires began, 20,000 acres of wheat and barley have been incinerated in Syria, while in Iraq, fires have broken out across 134,000 acres of land, with 20,000 acres of crops lost, according to figures issued last week by authorities in each country. 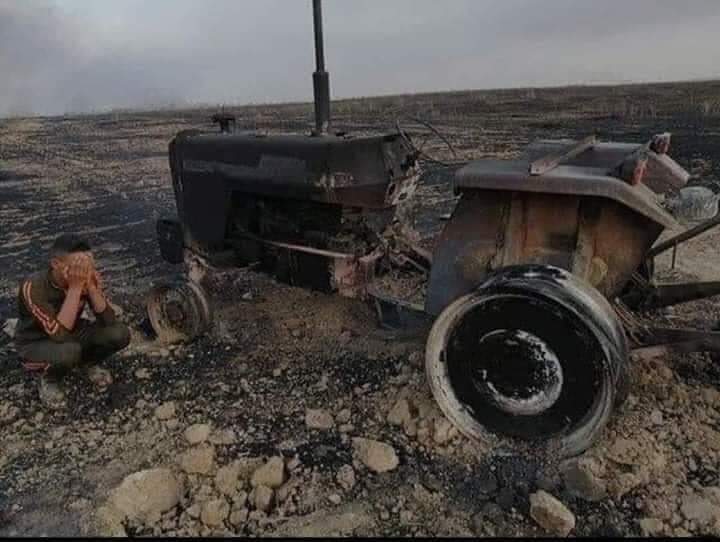 Loss of farm machinery to the deliberate fires is a hard blow to struggling farmers.

Fires have been raging in the crop fields surrounding the Yezidi village of Kocho in Shingal, killing at least two and leaving at least one other in a critical condition. The blaze also threatens to engulf suspected Yezidi mass graves in the area.

“The peoples of Ezidikhan were violently attacked by ISIS forces setting fires to the main food sources in the main population center. This is an act of genocide against our people. My Government has made an appeal for security, food, and medical support to the governments of India, Iraq and will seek the support of other governments in this hour of a ‘genocidal storm’ that is a continuation of the violence by ISIS and its allies. Ezidikhan stands alone in this emergency. We must now defend ourselves since many of the neighboring governments now turn their backs in the face of this horrific attack on the peaceful peoples of Ezidikhan.”

“Yezidis were set to recover from the terrible 2014 assault against our community. Once again Yezidis are being uprooted from Shingal villages. Eighty percent of the farmers in Shingal have lost crops and homes to these deliberately set fires. Yezidis have no place to go, with the refugee camps also being threatened by fire.”

“The Government of Ezidikhan including the Supreme Religious Council is expecting a response from the international community to this growing crisis before it is too late. The Yezidi community depends on these crops for its survival.”