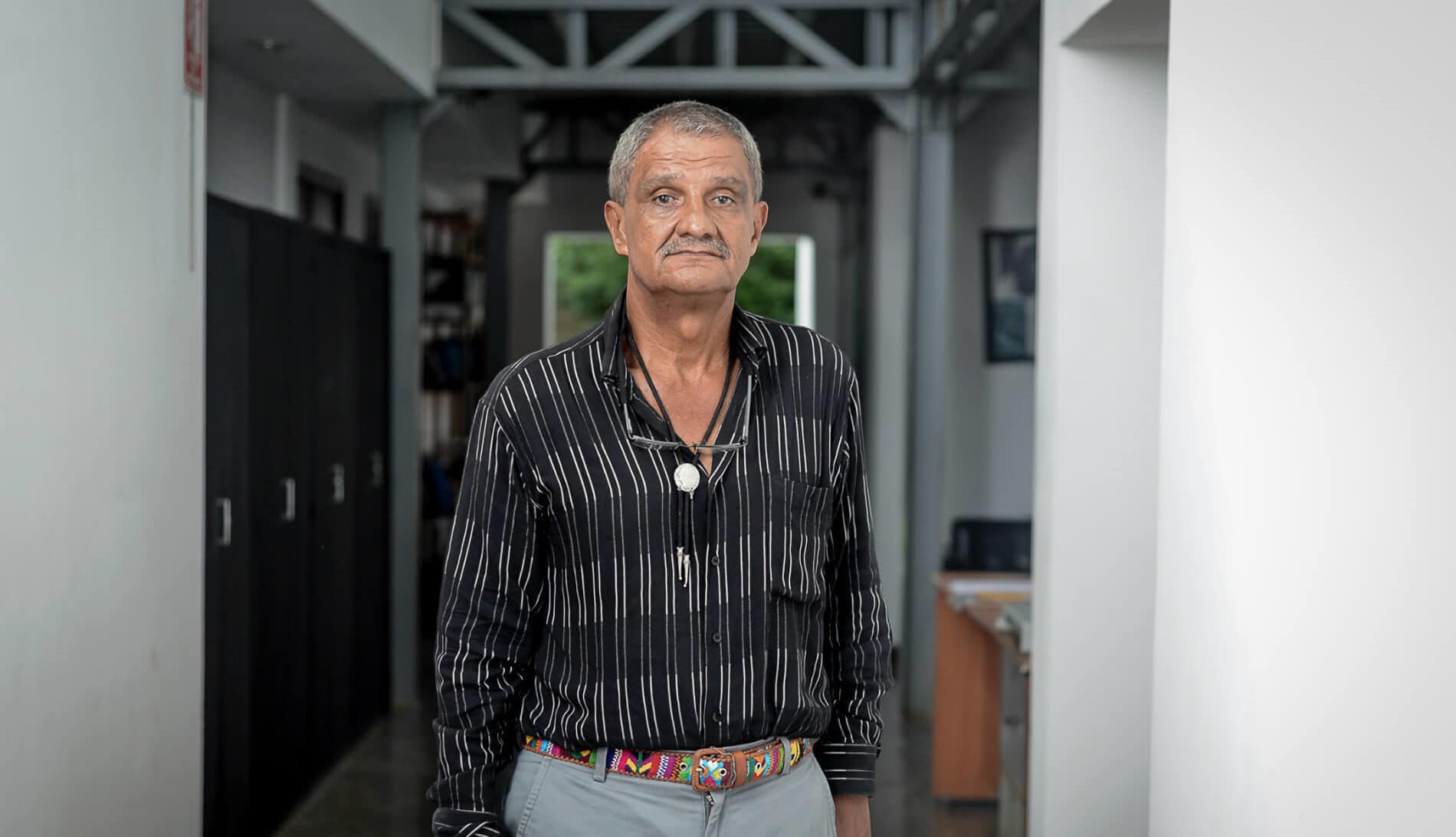 The famed Miskito Indigenous leader, Brooklyn Rivera, has been dealing with various manifestations of the FLSN (Sandinista) Party for decades.

He famously fought alongside AIM (American Indian Movement) founder and activist, Russell Means in the 1980’s. Means, who was injured by a Sandinista bomb while fighting alongside the Miskito, deemed their fight to defend an ancient indigenous territory from Sandinista nationalization and occupation as the ‘foremost struggle for Indigenous sovereignty in the world’.

It was dubbed by some U.S. media as ‘the last Indian war’; and Means would eventually go on to petition assistance from the U.S. government to support the Miskito as they had been supporting the Contras. He implied it would finally give them (the U.S.) a chance to be on the right side of an Indigenous cause.

Just as Indigenous Peoples caught in Guatemala’s civil war were ravaged by ‘scorched earth’ genocidal tactics – supposedly aimed at Marxist guerillas – Indigenous Peoples in Moskitia were subjected to genocidal attacks and mass internal displacement by the Sandinista, ostensibly via a similar false conflation with right-wing Contra groups. A more accurate depiction of the situation, however, is the FLSN were also waging war on them as a People; and, the ultimate prize was (and remains) their vast, lucrative natural resources and uniquely biodiverse rainforest – historically preserved through Indigenous stewardship and conservation.

Media coverage of the Ortega regime has increased since the nation-wide dissent began in April of this year. International venues are disseminating up-to-date information about Nicaragua to international audiences about the downward spiral of corruption which now defines the FSLN ruling party under President Daniel Ortega and his wife, Vice President Murillo – but there is also a false narrative emerging that this most recent student and campesino-led mass uprising was ‘unexpected’ and ‘sudden’.

Anyone who had been paying attention to the more marginalized struggles in Moskitia, a geographically isolated area historically under Indigenous rule, has seen this coming for years.

The Ortega government is using the same covert land grab operatives in other regions of Nicaragua – as reported by Al Jazeera – that Indigenous Peoples in the frontier communities of Moskitia have been trying to speak to the human rights community about for years.

The Global Witness report last year, citing Nicaragua as the most dangerous country per capita for land defenders was probably the most far-reaching international support and affirmation of their lived experience, to date.

Heavily armed settlers, dubbed ‘Colonos’ (which literally means ‘settlers’ in Spanish but is conceptually more specific in Moskitia) have held Moskitia under a violent siege for years. Their modes of operation and sophisticated weaponry – the latter of which has reportedly been traced to the government of Nicaragua and even further back to Russia – are eerily similar to the paramilitaries that terrorize the entire nation at this time.

Really, the armed groups who have shed so much Indigenous blood since the invasions escalated around 2015, are quite simply too similar – both in appearance and activity – to be considered at all distinct from this growing nationwide phenomenon.

Sadly, reports of sadistic torture at the hands of these government-backed paramilitaries paint a horrific parallel with reports IC collected on the ground from members of isolated Moskito communities in 2016 concerning the ‘Colonos’ – complete with testimonies of extremely violent sexual assault.

Consistent media coverage and international pressure are crucial to mitigating the murderous crackdowns on dissent, and criminalizing of protest, which the FSLN political machine has thus far shown no signs of stopping – dialogue or no dialogue.

As Al Jazeera, in particular, has put enough people on the ground to start reporting the real stories, it has become increasingly difficult for anyone to accuse critical media of the Ortega regime of having a pro-U.S. bias – a popular yet antiquated narrative spin offered by the Nicaraguan government, and their sympathizers, that the U.S. is behind these protests. This spin is also being countered by a student caravan across Europe – organized much like the Ayotzinapa caravan which sought to reveal truths behind the 43 disappeared students in Mexico.

And meanwhile, even Noam Chomsky has offered criticisms. Former Uruguayan president, Jose Mujica, has condemned the state violence as well. Both leftist icons have hinted that Ortega should either step down or submit to early, and more democratic, elections.

To give benefit of the doubt, Ortega may truly believe his own myth on the pretense that Russia has certainly re-established Cold War-esque relations with the small, impoverished country. Putin’s Russia, over recent years, has: supplied them with tanks and automatic weapons; provided security for the environmentally and socially disastrous attempt to build a transoceanic canal; initiated a new drug war in the small country — and begun training Nicaraguan militarized police to this end; and, built the equivalent of a modern Russian military base – a spy center capable of conducting covert surveillance over all of the Americas…

After all of this, it is understandable if the residents of Moskitia are put off that the new mass dissent still only seems to appropriate their struggles – such as the murder of Angel Gahona while he was livestreaming a solidarity protest in the region – when it furthers their own, albeit noble, cause.

However, when questioned directly, YATAMA political party leader – who has weathered innumerable, defamatory attacks on his reputation, another tactic which has emerged as a counter-strategy to undermine the nationwide uprising (i.e. attacking any signs of organized leadership) – does not see their struggles as wholly separate and expresses nothing but solidarity with the students and campesinos who continue to fill the streets in peaceful demonstrations, demanding the resignation of Ortega and Murillo.

Below is a transcript of an interview with Brooklyn Rivera, speaking as long-time leader of the Indigenous political party known as YATAMA (an acronym which translates in full as ‘Sons of Mother Earth) from July of this year (2018).

IC: What is your position on the current situation [in Nicaragua]?

Rivera: We are fully supporting the people; and, we are against the repression. We are participating within the context of our interests as Indigenous Peoples.

IC: How (or if at all) does the current situation compare to the Contra era?

Rivera: Today, it is a civic peoples’ revolution of the entire country. During the 1980’s, it was an armed resistance by the peasants and Indigenous Peoples against oppression.

IC: How does Ortega compare with Somoza?

Rivera: Both were family dictatorships; both attacked the Nicaraguan population with [government] repression and killings. Both tried, or are trying, to stay in power even as they resort to killings of the people and destruction of the country.
IC: Have you recently received any – directly or indirectly – threats to your life, or otherwise been terrorized by government forces or supporters?

Rivera: I have been attacked by riot police and pro-government mobs twice, both times while at the ‘Green House’ – the main headquarters of YATAMA in the Indigenous city of Bilwi – on November 4, 2017 and on June 14, 2018.

IC: What would you like the Indigenous Peoples of the world to know about the situation of Indigenous Nicaraguans right now?

Rivera: That our Indigenous Peoples have continued to suffer under the Sandinista regime since the 1980’s; but at the same time, we are still resisting all aggression and the policy of internal colonialism in general applied by the governments of Managua.

IC: How do you think Indigenous Nicaraguans should respond to recent escalations of violence and protest?

Rivera: With a higher level of unity…and resistance based on their identity and interest…but also in the context of the national struggle which is promoting a better chance in the future to exercise their rights as Indigenous Peoples.