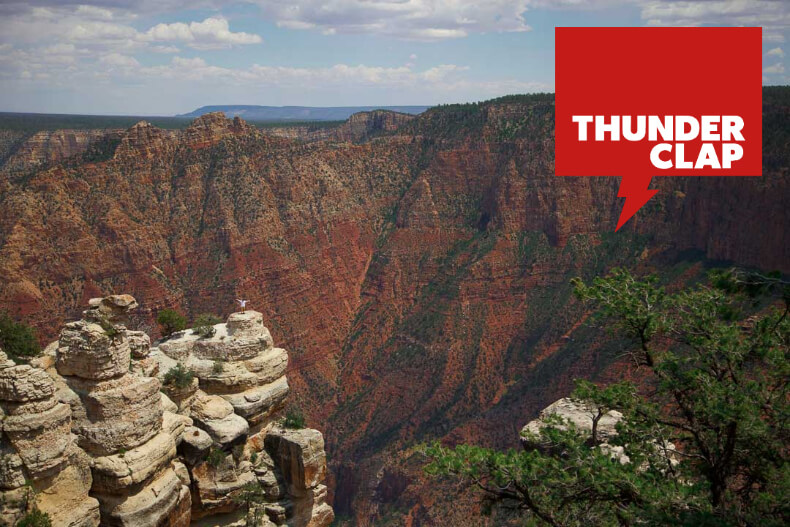 With just the click of a button, you can help Intercontinental Cry finish a ten-part investigative journalism project on uranium mining threats in the Grand Canyon. How? We’re glad you asked!

We’ve set up a Thunderclap to help us spread the word that we’re raising funds to keep us in the Grand Canyon for the next few weeks.

We’ve traveled to the Grand Canyon to look into the risks and impacts of the Canadian-owned Canyon uranium mine and the growing indigenous-led movement that’s rallying against this controversial project.

Sounds Good! But … What’s a Thunderclap?

Thunderclap is an online tool that uses the power of social media to get our message heard. Think of it as an online flash mob. If we can reach our goal by June 27th, Thunderclap will let us instantly reach tens or even hundreds of thousands of people on that day.

You just have to donate your social voice! Head over to our Thunderclap page and click “support with Facebook” (you can also support on Twitter, or Tumblr) and our message will be automatically posted to your account on June 27th. That’s all there is to it!

How many supporters do you need?

We need at least 100 supporters by June 27th. Right now, we’ve reached 25% of our goal, which means we have seven more days to find at least another 75 supporters.

Yes you can! And if you do support our Thunderclap campaign from both Facebook and Twitter, that counts as 2 supporters.

Ok let’s do this!

We like your attitude. Click here to visit our Thunderclap page and show your support! And after you do that, tell your staff, your members, your friends, your family and even your neighbours that the Grand Canyon has you as ally!

Want to know a bit more about the work we’re doing? Head over to https://intercontinentalcry.org/grandcanyonfutures/