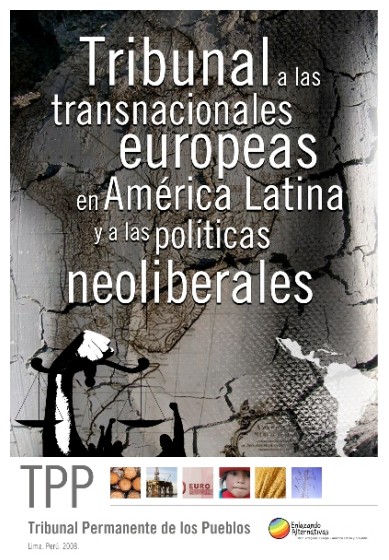 The Permanent People’s Tribunal (PPT) was gathered in Lima, Peru, from May 13 to 16, for its second session on European Transnational companies in Latin America.

Convening within the Peoples’ Summit Linking Alternatives 3 — which was itself organized in parallel to the 5th Summit of Heads of State and Government of the European Union – Latin America and the Caribbean (UE-LAC) — the Tribunal spent the week collecting evidence and testimony surrounding the actions of more than twenty European Corporations who stood accused of violating human rights and destroying the environment.

The names of the companies are: Majaz-Monterrico Metals and Vale do Rio Doce from the mining sector; as well as Roche and Boehringer from the pharmaceutical industry; Shell and Repsol YPF from the oil sector; Botnia and ENCE from the forestry-pulp industry; Syngenta in the agribusiness sector; Skanska and Thyssen Krupp in the infrastructure sector; ETI-Telecom in the telecom sector; Unión Fenosa and Suez in the electricity sector; Aguas de Barcelona and Proactiva (Veolia-FCC) in the water sector, Unilever, Camposol, Cermaq Mainstream and Marine Harvest in the agrifood sector, Bayer in the agrochemical sector, and BBVA, HSBC and Santander in the banking sector.

A dossier providing details on each company and what they were accused of, was put together by the Tribunal of the bi-regional network Europe, Latin America and Caribbean “Enlazando Alternativas” and the team of RealWorld Radio (www.realworldradio.fm). You can download the dossier here (pdf). 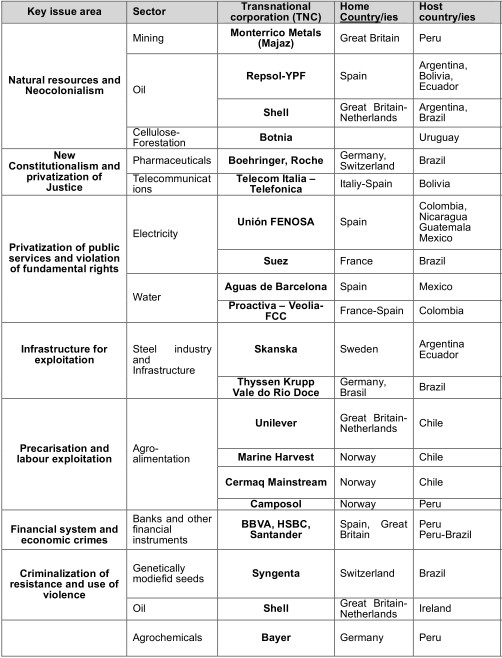 The Tribunal also spent time examining “the national and international mechanisms (financial, media, legal, etc.) and actors (the EU, the governments of its member states as well as the governments of Latin American countries, WTO, World Bank) which enable, legitimate and support the companies in their actions,” notes the Transnational Institute.

A few days before the tribunal convened, RealWorld Radio interviewed Christine Pohl, from Friends of the Earth Europe, who further explained that the Tribunal is also exposing “the inexistence of effective legal mechanisms to move forward in the economic and political model in which transnational corporations have the legal obligation to respond to its crimes.”

It’s a problem that will get alot worse if the European Union gets its way. Afterall, their current trade strategy, “Global Europe: Competing in the World,” promises greater deregulation of Latin America’s social, labor and environmental laws. This ultimately guarantees more environmental destruction, more exploitation, and even worse forms of abuse wrought on the People of Latin America (… and guess who will be attacked for trying to stop it).

The final ruling of the tribunal, which was read last Friday at the closing session of Linking Alternatives 3, found all the companies GUILTY.

The ruling also resolved “to ‘morally and ethically sanction’ the companies as well as the ‘political, economic, financial, productive and judicial conducts and practices of the neoliberal model, implemented and permitted by the States and the Institutions of the European Union'”, according to this report on RealWorld Radio.

Aswell, the ruling announced a plan to seek a special rapporteur appointed by the United Nations Human Rights Council to develop and “present a report before the UN General Assembly as soon as possible, containing a proposal to characterise the concept of illegitimate ecological and historical debt, as well as the recognition and denunciation of violations to the economic, social and cultural rights of persons and peoples committed by governments, financial institutions and multinational corporations…”

The ruling further called “on the States and governments of Latin America and the Caribbean to “guarantee peoples’ sovereignty and dignity before private economic interests; preventing the privatization of fundamental resources such as water, air, land, seeds, and genetic heritage; and ensuring the universal access to public services”.

Lastly, the PPT stated they recognize “the importance, the difficulty and the inherent risks linked to the struggles of social, peasant, workers and indigenous movements and other grassroots organizations” — and they they will continue to “accompany – deepening the recognition of the juridical responsibility of the transnational corporations – the denunciation of peoples’ rights by companies, States and international institutions, and the construction of alternatives.”

You can download the Tribunal’s full ruling in Spanish here. An English version is not yet available.

You can also visit RealWorld Radio for additional coverage on the Tribunal and the People’s Summit.

Finally, here’s an article on IPS News about the Tribunal’s first session, which took place in May 2006.