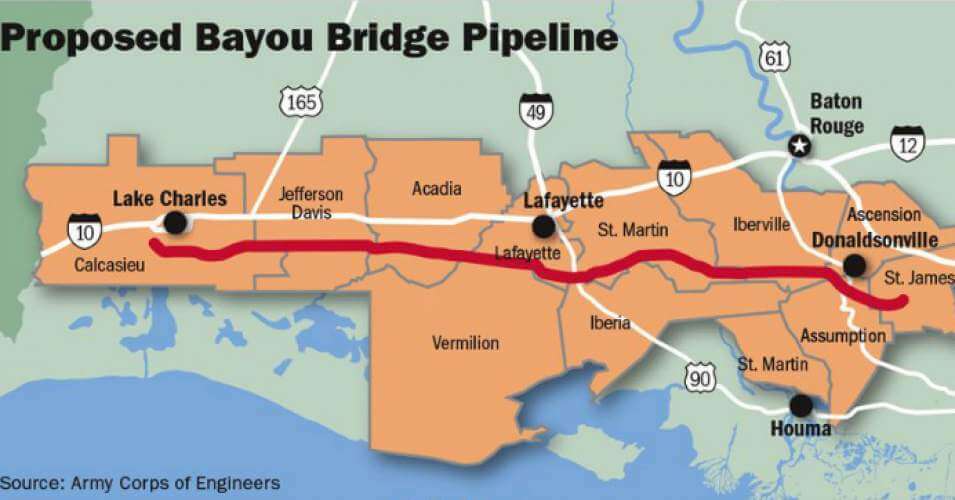 "Landowners, impacted communities, indigenous peoples, and environmental groups have made their stance clear; for the benefit of the water, the land, and Gulf Coast communities this dirty Bayou Bridge pipeline cannot be built."
The U.S. Army Corps of Engineers has approved a pipeline project that would transport crude oil across more than 160 miles of Louisiana. (Photo: U.S. Army Corps of Engineers)
Support our journalism. Become a Patron!

The U.S. Army Corps of Engineers, which refused to perform an environmental impact review of the project, has enraged indigenous and other local opponents by granting a permit for the Bayou Bridge pipeline in Louisiana to a subsidiary of Energy Transfer Partners—the company that is also behind the Dakota Access pipeline.

“The Army Corps and Energy Transfer Partners should expect resistance,” warned Kendall Mackey of 350.org. “Bayou Bridge is another dangerous pipeline from a company that’s shown complete disregard for Indigenous rights, the land and water, and our climate.”

Energy Transfer Partners (ETP) plans to build the 162-mile Bayou Bridge pipeline as a segment of a larger system that already carries crude oil from Nederland, Texas to Lake Charles, Louisiana; the new segment would extend to St. James, Louisiana, crossing the Atchafalaya Basin, the largest freshwater wetland and swamp in the country.

“It’s heartbreaking, but not surprising, that the Army Corps of Engineers would approve ANOTHER pipeline to be rammed through our already over exploited and fragile south Louisiana land and waters,” said Monique Verdin, a United Houma Nation tribal councilmember.

“The Houma Nation and all those south of the proposed Bayou Bridge pipeline route deserve the right to clean water for drinking, for bathing, for fishing, for life,” Verdin added. “We know the risks and Energy Transfer Partners has got the track record for us to know the gamble is not worth it.”

An analysis (pdf) of government safety records by the environmental group Waterkeeper Alliance revealed that ETP and Sunoco, which merged earlier this year, have had a combined 329 pipeline incidents since January 2006, averaging more than two dozen per year. These incidents, according to the group’s report, “have resulted in releases, spills, injury and/or death to a person, an emergency shutdown, explosion, fire, and/or property damage all across the United States.”

Representatives from the U.S. Army Corps of Engineers claimed the Corps “neither supports nor opposes this project” and “carefully weighed the energy benefits of the project while ensuring environmental protections remain in place.” However, the Corps issued the Bayou Bridge permit without first conducting a Environmental Impact Statement, despite demands from residents and environmental organizations that the government fully examine the pipeline’s projected impact on land and water resources before making any decisions.

“As a regulatory agency, if you look at ETP’s safety record, you have absolutely no cover to assert that this pipeline does not pose a threat to environmental quality in Louisiana,” Alicia Cooke of 350 New Orleans said. “The regulators of the state of Louisiana had a chance here to make substantive change to ‘business as usual,’ to put citizens over corporations—instead, they failed us. But ETP has not yet won, nor will they win.”

“If Energy Transfer Partners wants to provoke a giant, then that’s what they will get,” declared Dallas Goldtooth of Indigenous Environmental Network. “Landowners, impacted communities, indigenous peoples, and environmental groups have made their stance clear; for the benefit of the water, the land, and Gulf Coast communities this dirty Bayou Bridge pipeline cannot be built.”

Anne Rolfes, founding director of the Louisiana Bucket Brigade, told The Times-Picayune of New Orleans, “This is just the beginning,”

“We will resist non-violently now,” vowed Rolfes. “We will put our bodies in the way to prevent this pipeline from being built because this pipeline threatens drinking water, our crawfishermen, and so much that we hold dear.”

This article was originally published at Common Dreams. It has been re-published at IC under a Creative Commons Attribution-Share Alike 3.0 License.