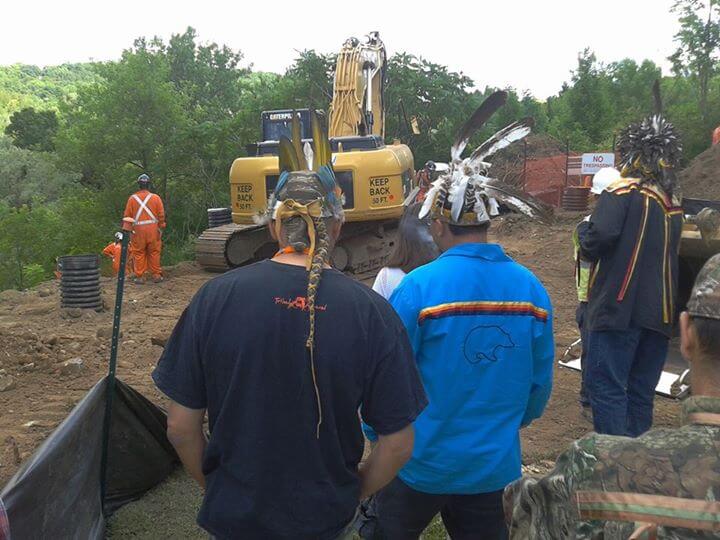 Individuals from Six Nations and their allies have interrupted work on a section of Enbridge’s Line 9 pipeline. The work stoppage began around 10am this morning. Individuals involved asked workers to leave, asserting that the land is Haudenosaunee territory guaranteed under the Haldimand deed, and that Enbridge’s workers were present without consent or consultation.

“Meaningful consultation isn’t just providing information and going ahead without discussion – it’s giving the opportunity to say no and having a willingness to accommodate.” says Missy Elliot.

“Enbridge left a voice message on a machine with one person. That’s not meaningful – it’s not even consultation.” Emilie Corbeau, there in support of Six Nations, points out.

Those involved intend to host an action camp, filling the time with teach-ins about Six Nations history, indigenous solidarity and skill shares centering on direct action.

The group states that they’ve tried the other processes available to them and [are] here out of necessity. “We’ve tried pursuing avenues with the NEB, the township and the Grand River Conservation Authority. Our concerns were dismissed. What other choice do we have if we want to protect our land, water and children?” Missy Elliot of Six Nations asks.

Under bill C-45 the section of the Grand River adjacent to the Enbridge work site and pipeline is no longer protected. Approximately half a million people rely on drinking water provided by the Grand River.

“This isn’t just about line 9 – or Northern Gateway, Energy East or Keystone XL. This is about pipelines – all of them.” Danielle Boissineau, of Turtle Clan, asserts. “This is about the tarsands and how destructive they are to expand, extract and transport.”

“This is a continental concern. It’s not just a Six Nations issue or an indigenous issue. We share the responsibility to protect our land and water as human beings.” Elliot states.