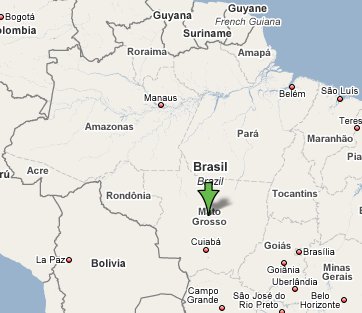 Continuing their struggle against a large hydroelectric dam project in the Brazilian Amazon, the Enawene Nawe set up a blockade at one of the dam construction sites late last week. According to Survival, about 100 members of the 420-strong tribe occupied the building site, demanding an independent study into the impact they will have.

The Enawene Nawe maintain the dams will have a devastating effect on the breeding cycle of the fish they depend on to survive. They say the fish might not even be able to make it to their breeding grounds. The grounds themselves are of great cultural and spiritual significance to the Enawene Nawe. If the 11 dams go ahead as planned, the area may be destroyed.

The grounds are already heavily burdened by cattle ranchers, and the Soya Industry–who is behind the dam project.

Of course, this would not be happening if the Brazilian Government demarcated the area, in fact the entire Rio Preto, when they recognized Enawene Nawe territory in 1996. The government refused to do so.

Since then, the Enawene Nawe have been working to have the Rio Preto included, but so far their voices have fallen on deaf ears.

When the dam project came into focus late 2006/early 2007, they increased their efforts, for one, by organizing blockades. The ongoing one is the third this year.

The remote Enawene Nawe Indians have blockaded the construction site of a hydroelectric dam in the Brazilian Amazon, which they say will destroy their vital fishing grounds. Around 100 members of the 420-strong tribe occupied the building site and a nearby highway on Thursday, December 6. They want to stop the construction of a vast complex of hydroelectric dams being built on the Juruena river, upstream from their land.

Companies led by the world’s largest soya producers, the Maggi family, are pushing for the construction of the dams. But the Enawene Nawe, who eat no red meat, say that if the dams are built, the fish they rely on will no longer be able to reach their spawning grounds.

The Enawene Nawe say they have not been consulted about the dams. They are demanding and independent study into the impact they will have.

A previous blockade of a major highway in June led the government to negotiate with the Indians, but plans for construction of the dams continued.

After the first opposition action, the Brazilian government agreed to several key demands of the Enawene Nawe. The government’s Indian agency, FUNAI, promised that it would survey lands claimed by the Enawene Nawe and other tribes, with the aim of officially recognizing the areas as indigenous.

For three days in May, the Indians erected barricades in Mato Grosso state to protest against plans to build a series of hydroelectric dams along the Juruena river. They were also demanding the official recognition of their vital fishing waters in the Rio Preto area, which are being rapidly destroyed by cattle ranchers.

Neighboring tribes joined the protest in support of the Enawene Nawe’s demands, swelling the number of protestors to 200. The government responded quickly by dispatching officials to negotiate with the Indians on the barricade. It even agreed to pay for representatives of various tribes in Mato Grosso to travel to Brazilian capital Brasília to meet with FUNAI’s president.