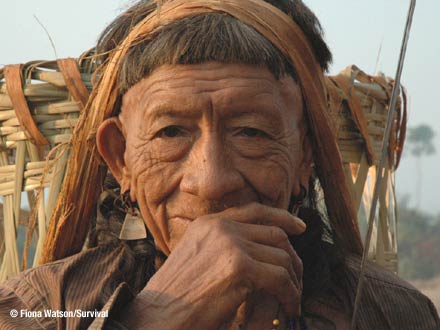 A few days ago the Enawene Nawe set up a road blockade in protest to a series of hydroelectric dams which will destroy their fishing grounds, which they depend on.

Today they dismantled the blockade and have begun travelling to the capital of Brazil to meet government officials.

From Survival International – The Indians mounted the blockade on 31 May to protest against plans to build a series of hydroelectric dams along the Juruena river, which they say will destroy their vital fishing grounds.

According to local press reports, several neighbouring tribes joined the protest and about 100 Indians armed with bows and arrows effectively isolated the northwestern part of the state.

A commission composed of government officials and the police negotiated with the Enawene Nawe who agreed to halt their blockade if they could meet with the president of FUNAI (the Brazilian government’s Indian affairs department) to raise their concerns.

A delegation of Enawene Nawe set out today on the long journey to Brasília. (source. Also see this article about the blockade)

Write a letter in support of the Enawene Nawe

If you’d like to express your support of Enawene Nawe, letters can be sent to the following addresses/emails. To learn more about the Enawence Nawe, and for a sample letter, see this page on survival