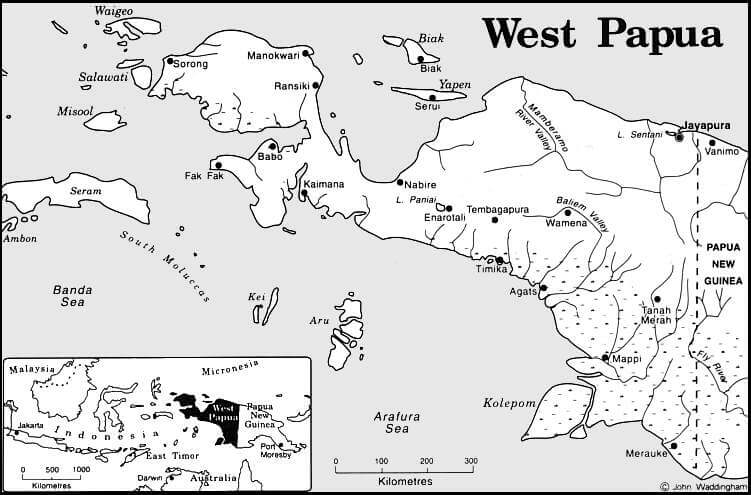 Yesterday, eight West Papuan men and women were arrested at the conclusion of a four-day Papuan Tribal congress meeting in Jayapura. The police say the arrests are because the West Papuan national flag was used in the opening ceremony of the conference; however it’s more realistically part of the continuing campaign to intimidate anyone who would discuss self-determination. Indonesian authorities also recently banned U.S Congressman Eni Faleomavega from entering Papua and attending the Tribal Congress.

Amid this comes the announcement that Indonesian police, military and local government have teamed teaming up with Islamic militias and hardline nationalist groups to crack down on West Papuan activists. (Report – Jakarta IMC)

From indybay.org – The newly elected head of the council, Forkorus Yoboisembut in a speech after his election, said his main job would be to fight for independence from Indonesia. “This is the voice of the kampong people and we should fight for it together,” he said to the cheers of the some 500 congress participants.

“We do need better living standards, but (the ongoing) development or forced special autonomy that is underway should not stop West Papua’s independence, since it is our right to determine our future and those who oppose this are violating our human rights.” The congress was attended by participants from seven tribal regions in Papua and West Papua provinces.

Paula Makabory, Elsham representative in Australia said ” These people have been arrested as part of a campaign to intimidate any group or organisation discussing self-determination which in a democratic country, like Indonesia claims to be, should be their right and it is a right guaranteed under the United Nations . These people were simply discussing the human rights situation and how to improve the lives of the people.

Joe Collins of the Australia West Papua Association said “a report released last week by the New York-based Human Rights Watch, details abuses by the Indonesian military in West Papua including the beating, rape and murder of people accused of belonging to the OPM, the Free Papua Movement. There is real fear about the safety of any West Papuan arrested or accused of being involved in so called separatist activity “.

Colonel Burhanuddin Siagian who is commander of the Jayapura sub-regional military command, Korem 172, is reported in the Cendrawasih Post, of the 7 July 2007, stating “that it is the duty of the TNI to crush any struggle or activity undertaken by any group in the community which tends towards separatism” and “’What is absolutely certain? is that anyone who tends towards separatism will be crushed by TNI”.

(An open letter to President Yudhoyono from a number of human rights organisations calling for the removal of Colonel Siagian from West Papua can be found at http://tapol.gn.apc.org/news/files/let070628.htm) (source)