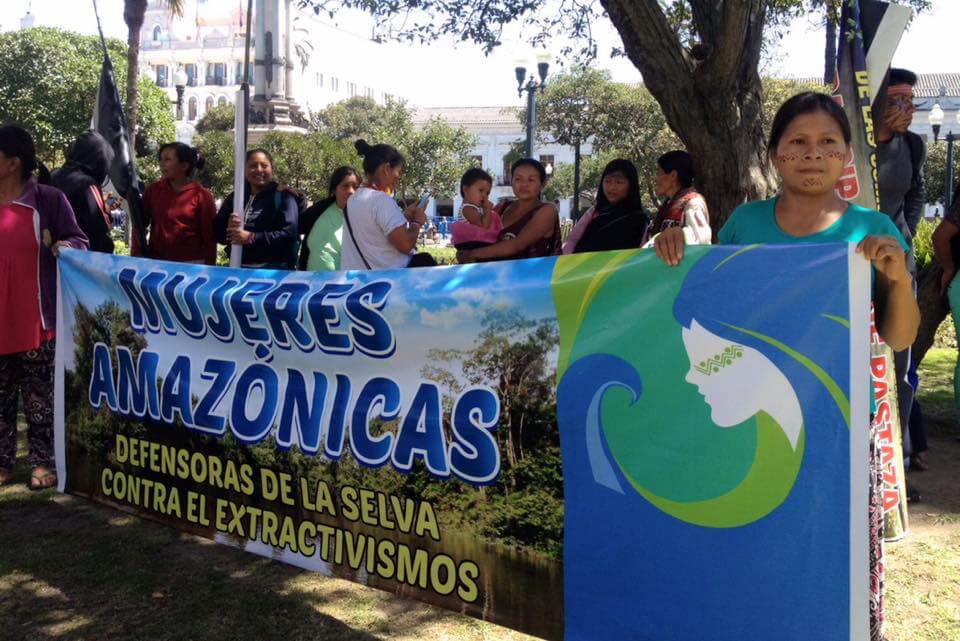 Indigenous women gathered at the Independence Plaza to hand down their demands to the president. Credit: Yasunidos
Support our journalism. Become a Patron!

PUYO, ECUADOR – As in many spots around the globe, Women’s Day in Ecuador was marked by manifestations vindicating their role within society. For Indigenous women in the country, this was no exception. Unlike the short-lived momentum of the date, however, their strategy extended well beyond commemorative schedules. Their objective was clear: Their voices had to reach the country’s Presidential Palace.

For over nine months, political dialogues between Indigenous organizations and President Lenin Moreno’s government have left scattered results. Yet the gap from words to deeds remains firmly in place. The government’s reluctance to fully implement compromises was exposed when, early this month, the Minister of Hydrocarbons announced that a further oil auction is underway despite an explicit commitment to the contrary.

Or worse, when Ecuadorian Minister of Mines Rebeca Illescas, in a clear act of defiance, bypassed Indigenous legitimate leaders and introduced a co-opted low-rank Indigenous representative to give support to the country’s participation at the Prospectors and Developers Association in Canada (PDAC), a major mining investment event earlier this month, a move that was promptly repudiated by Shuar Indigenous Leaders.

Negotiations with the Moreno administration continue with no promising prospects despite all these low blows. Yet what the government did not see coming was that an unexpected group of major players is starting to take its toll on the discussions with a voice of their own: Indigenous women. 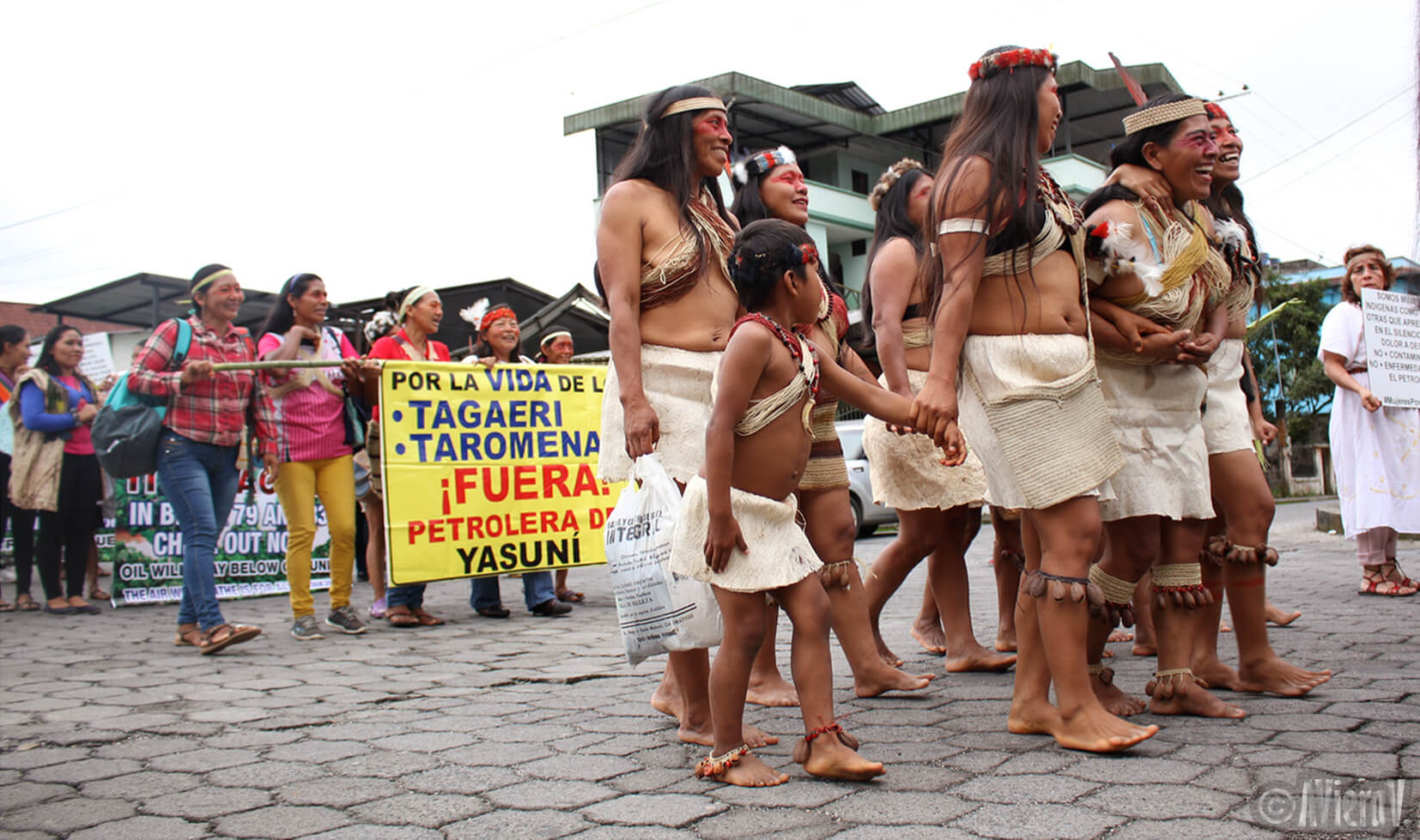 From the heart of Ecuador’s Amazon

In Puyo, the capital of Pastaza –Ecuador’s biggest Amazonian province–, Indigenous women from all over the Amazon region started off their own efforts to further pressure the government. Leaders of seven nationalities including the Andoa, Achuar, Kichwa, Shuar, Shiwiar, Sapara and Waorani were present at the event.

Led by female Indigenous leaders from the Confederation of Indigenous Nationalities of the Ecuadorian Amazon (CONFENAIE), the main Indigenous organizations in the Oriente region, the movement strategically crafted a bold agenda that extended for four days.

On March 8, seizing the visibility of the date, the events set off with a march that set the tone for their demands in defense of their territories. Around 350 Indigenous women from across the Ecuadorian Amazon marched down the streets of Puyo to speak up against the extractivist industries.

The message was clear: They had had more than enough of the contamination and exploitation of their territories. 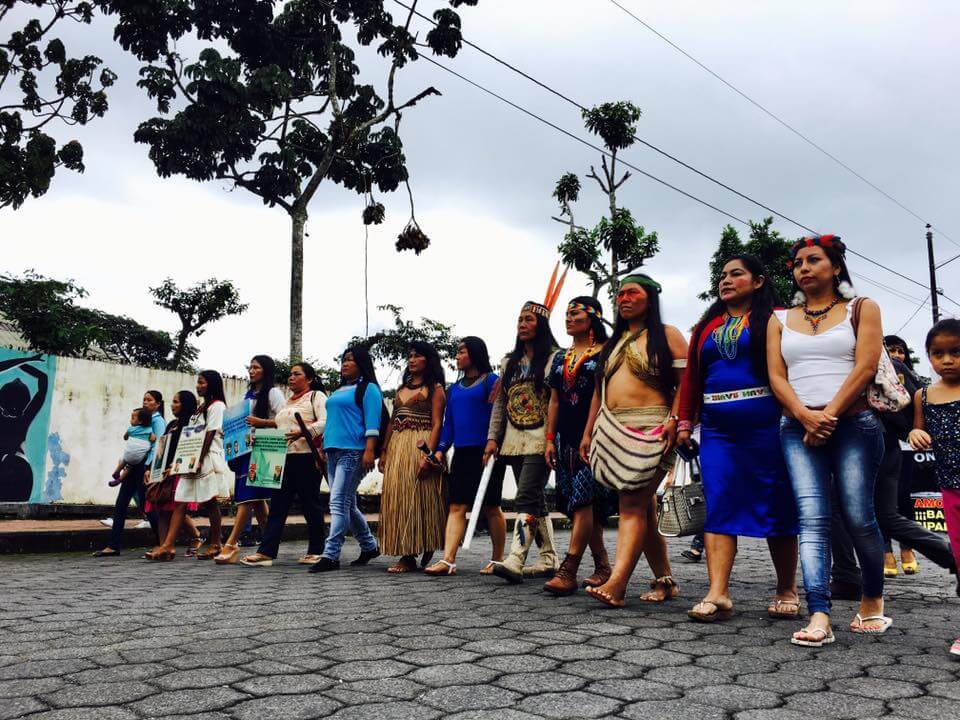 The march was followed by a three-day gathering in Union Base, a landmark concentration spot at the outskirts of Puyo from where major Indigenous protests have been launched in the past. IC Magazine attended the event, which included the establishment of a women-only Assembly of Amazonian Women. For the inaugural session on Friday, March 9, around 400 assembly members had registered, including female leaders and representatives from across the country who had responded to the call of the organizers.

Upon inaugurating what was going to be a three-day session before embarking on a trip to the country’s capital, Elvia Dagua, CONFENAIE’s Leader of Women, reminded the audience that “Women’s Day is not March 8 alone, but every single day of the year.” This, she said, is because there is no life without women, before inviting the few male attendants to also join their cause.

“Together, men and women, we are going to defend our Mother Earth,” she said, as she opened the floor for participants to intervene.

According to Patricia Gualinga, a well-known Indigenous leader of the Sarayaku community and also a participant of the congress, the goal of this series of events is to make women’s voices and proposals heard. In her view, their aim is to awaken public opinion in the face of their latent fears of what lies ahead. The government, Gualinga told IC Magazine, is calling for another oil auction in the South-East of the country’s Amazon, which is the reason why women are raising their voices in unity. 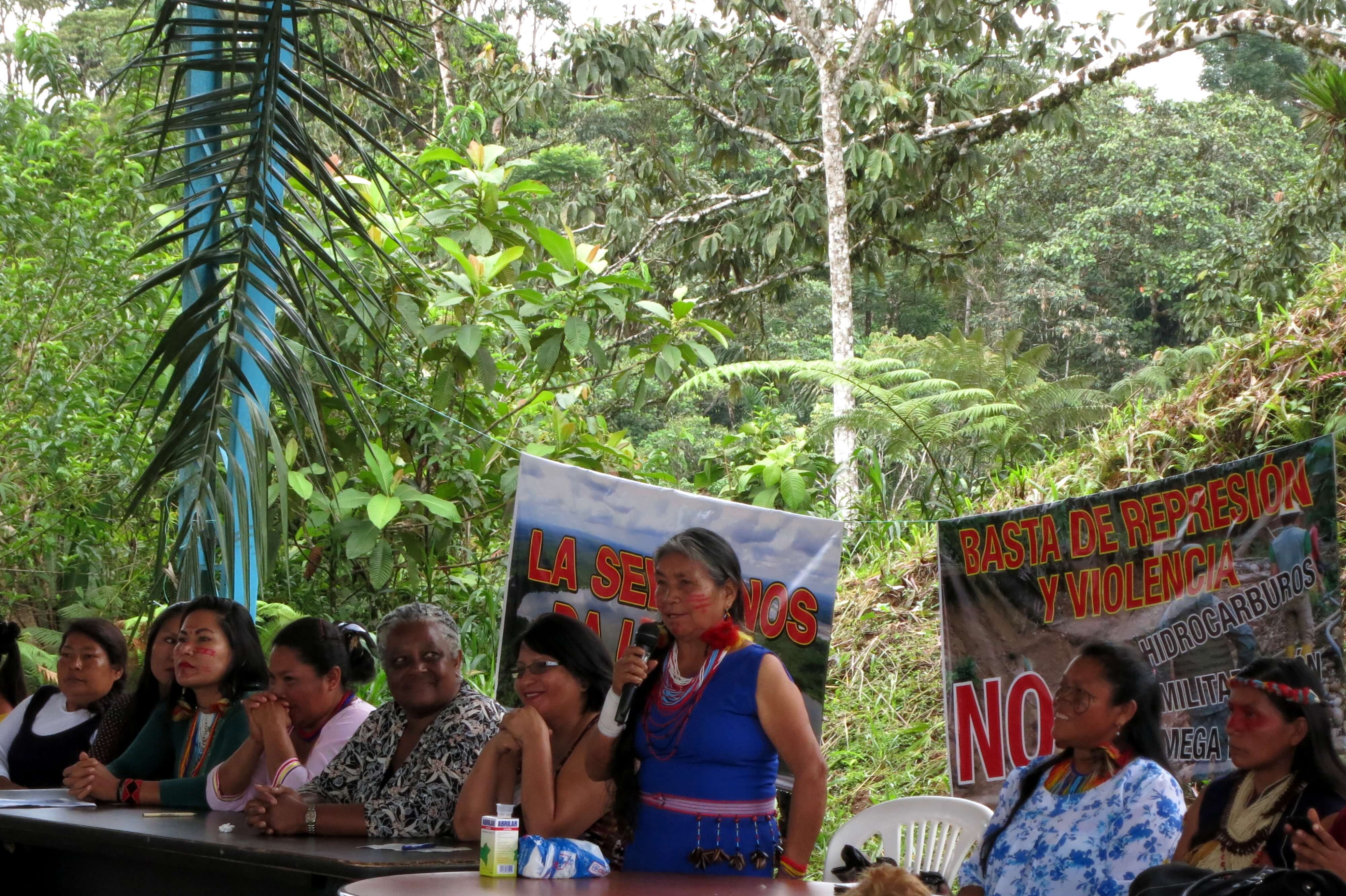 Leading panel for the Assembly of Amazonian Women on March 9 in Union Base. Credit: Ursula Cliff

Towards a different relationship with Nature

Throughout the opening session, assembly participants were asked to share their own experiences with extractivist activities, as well as to advance concrete proposals for overcoming them. Be it caused by mining or oil extraction activities, stories portraying violence and discrimination cut across themes that marked the interventions. 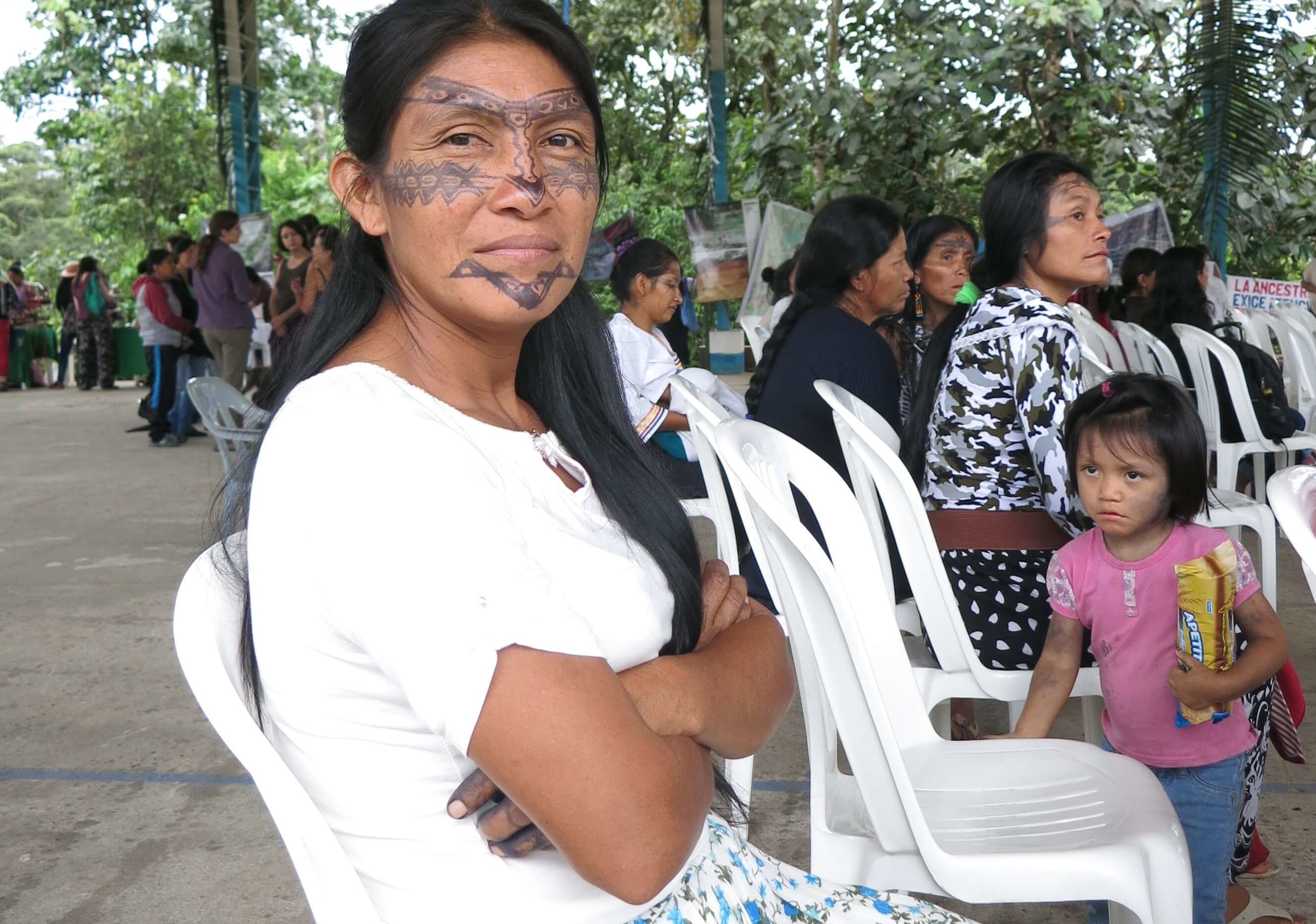 A participant at the Assembly of Amazonian Women. Credit: Ursula Cliff

Another recurring topic was the importance of such events in bringing together efforts to speak with one voice. Alexandra Proaño Malaver, president of the Andoa nationality located in the province’s far eastern border with Peru, expressed to IC Magazine her desire for local communities to further be included in such events.

“For us women, to talk about the defense of our territories and of life itself, we should do it from the communities” she said. The struggle should not only come from those women who live in the city, she explained, for it is “us, Indigenous women, that day by day are sowing and harvesting […] and thus sustaining life in our communities.”

Far from excluding men, all female leaders talked about a certain gender balance. Proaño, for instance, reckoned that “equity between man and woman is very important for [them]” while pointing out the experiences within her own nationality. A point that was further corroborated by Gualinga when she said, “We do not exclude men; we actually strengthen the relationship between (women and men).”

“This is simply a kind of space where we women regain our own voice,” she added.

During her long-awaited intervention within the assembly, Patricia Gualinga unveiled her community’s proposal for overcoming the constant failures of what in her view are top-down approaches for the protection of the Amazon. Elaborated by members of the Sarayaku community, Kawsak Sacha, Living Forest in Kichwa is a new scheme when it comes to natural conservation, she said, that leaves the responsibility of the protection of the Amazon in the hands of Indigenous people.

In her view, this is a proposal that intends “to change the conception of everything that we have been taught at school,” for it is based on her own ancestral traditions and Indigenous ways of relating to Nature. The project’s goal, she said, is “to transform the whole scheme on which the current and obsolete economic system is based.”

Without providing further details as to the specifics of the project besides a major launch event in Quito in the coming months, Gualinga’s intervention served rather to spur the mood of the audience.

“This is a proposal for and by us; nobody has done the thinking for us,” she proclaimed in a boost to the pride of Indigenous women and their holistic relation to Nature that they want to share with the world.

Alicia Cahuiya, another experienced Indigenous leader from the Waorani nationality located in Yasuní National Park, shared with IC Magazine some key insights as to the overall message they are trying to send. “The government needs to understand that these are ancestral territories,” she said. “We don’t want more oil and mining companies; our territories need to be respected.”

Confronted with the government’s continued neglect, their message seems to preserve the living voices of the Amazon. “This is our home; here we have lagoons, waterfalls and animals and they all have spirits,” Cahuiya said, the government needs to grasp that “they all need to be included and heard, because our lives are interconnected with theirs.” 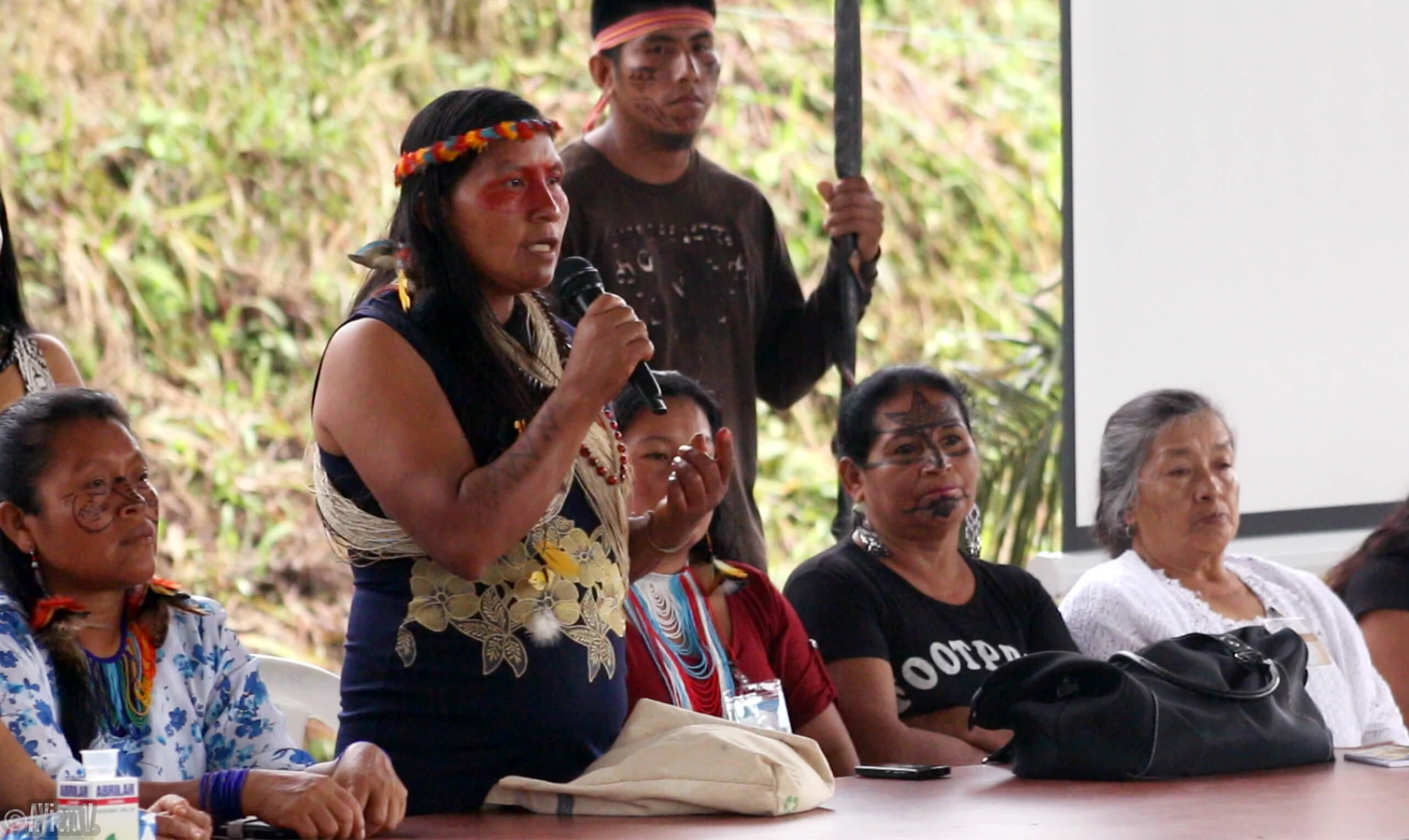 Waorani leader, Alicia Cahuiya, intervening in front of the Assembly of Amazonian Women to expose the dangers of the oil industry within the Yasuní National Park. Credit: Andrés Viera V.

The working sessions in Puyo resulted in a document that incorporated all their demands. The next and final destination was Quito, Ecuador’s capital, to hand down their ‘mandate’ to the President himself.

Indeed, on Monday, March 12, the march reached the capital for a press conference scheduled at the Independence Plaza, right in front of the Presidential Palace.

The collectively crafted document called ‘Mandate of Amazonian Women’ included 22 specific requests headed by the most urgent demand: rejecting what they consider “illegal contracts or agreements between local authorities and any oil, mining, hydroelectric or logging company,” for “we are more than 50% of the Indigenous population, we are the carriers of life and take care of our families and Mother Earth.”

“The document also included, among others, their rejection to the upcoming oil auction of 16 blocks located in Ecuador’s South-East Amazon region, their request to overturn recent oil concessions in blocks 79, 83, 74, 75 and 28, as well as their solidarity and demands for the liberation of Indigenous leaders Angel Nantip, Domingo Ankuash, José Esach, Luis Tiwiram, Esteban Pandam and Pepe Acacho, arbitrarily imprisoned for their upfront rejection of mining activities in Shuar territories in Morona Santiago, the country’s southernmost Amazon province.”

Despite mild police repression in front of the Presidential Palace, the leaders of the Indigenous women conveyed their willingness to stay until the President hears them. As of the time of this publication, Lenin Moreno had not given any response. Whether he will attend those demands or not, the message has been clear. The striking echo of their demands will be hard to ignore, for voices of the Amazon have now joined their cause.

Indigenous women gathered at the Independence Plaza to hand down their demands to the president. Credit: Yasunidos