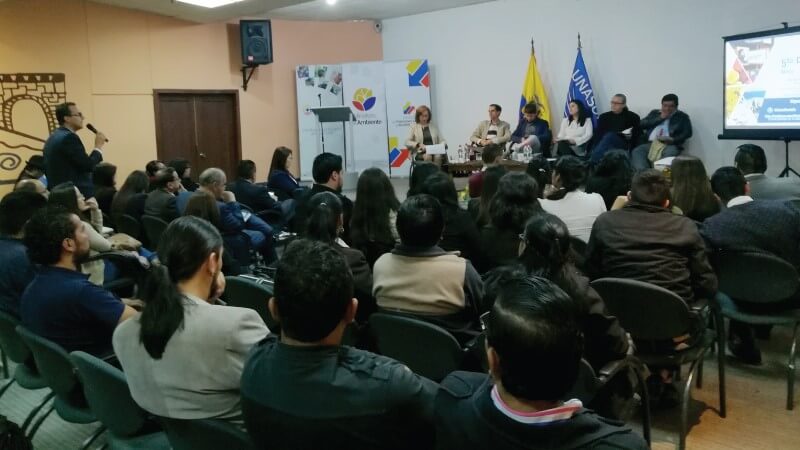 Ecuador’s Indigenous diplomacy can save the Amazon

Source: Ministry of Foreign Affairs of Ecuador
Support our journalism. Become a Patron!

Cuenca, Ecuador – Ever since he took power, Ecuador’s new president, Lenin Moreno, has been distancing himself from his anti-Indigenous predecessor. In his recent call for a national political dialogue, Indigenous peoples took center stage airing their longstanding demands in defense of their territories. And not without reason.

The relationship between the State and Indigenous peoples in Ecuador eroded sharply during the decade-long presidency of Rafael Correa. From forced displacements caused by ongoing mining projects to persistent demands to stop further oil exploitation, the voices of Indigenous peoples were usually left unheard when it came to the protection of the Amazon rainforest.

While the current dialogue has stalled over the pending amnesty for all Indigenous persons prosecuted and criminalized for protesting during the Correa administration, progress –albeit slow– has been made. On July 4, Moreno promised to restore the headquarters of the Confederation of Indigenous Nationalities of Ecuador (CONAIE), the country’s largest Indigenous organization, a move that just took effect on Aug. l0 and is seen as a welcome sign of this rapprochement.

Indigenous peoples have not entered this dialogue empty-handed. Responding to the government’s new attitude, their approach is committed to contributing to Ecuador’s transition away from an extractive model of accumulation. Theirs is an approach that, reaching far beyond the country’s borders, seeks to strengthen ties with international allies and creatively shape the country’s foreign policy, a political dimension long considered a State-only business.

On Aug. 8, amid this less confrontational atmosphere, the Ecuadorian Ministries of Foreign Affairs and Environment convened the fifth call for working meetings aimed at redefining the country’s foreign outlook. For this round, a so-called Green Diplomacy Meeting took place in Cuenca, in Southern Ecuador.

According to Pamela Ochoa, Head of Environmental and Sustainable Development Issues at the Ministry of Foreign Affairs and one of the organizers, the goal was to gather input from civil society on environmental issues, to help define the new administration’s foreign policy.

A public panel discussion was set up joining different academic and social organization representatives, as well as official delegates from the new government. Among the speakers, Shuar Indigenous leader Juan Carlos Jintiach took the floor on behalf of the Coordinator of Indigenous Organizations of the Amazon River Basin (COICA), an umbrella association for Indigenous peoples located in the Amazon.

Whereas most of the interventions concentrated on the harsh realities of Ecuador’s commodity dependency, Jintiach reminded the audience about taking Indigenous voices seriously for any attempt at greening the country’s foreign policy. His emphasis was on the importance of recognizing and applying Indigenous peoples’ collective rights to their ancestral territories.

There is an abysmal difference between Indigenous traditions and practices on the one hand, and the Western concept of territory, Jintiach elaborated, from which the Amazon region is merely considered as a lifeless and uninhabited space under siege. “Without territory, there can simply be no Indigenous peoples” he said.

The allusion marked a clear contrast away from the nostalgic tone of most of the panelists, for whom the failure of the Yasuní Initiative in 2013, a terrible blow for Ecuador’s diplomacy, took away much of the country’s visibility on the international stage. Indeed, during its short-lived existence, the bold project to keep much of its oil reserves underground managed to put this small Andean country at the forefront in environmental issues globally, leaving a big void now waiting to be filled.

For university professor Antonio Malo, a panelist at the event, Ecuador is a small enough country to make it hard for any of its proposals, however innovative they might be, to be taken seriously at the international level. “Rich countries not helping the initiative were clearly showing no interest in its success, for that would have greatly threatened their own profits,” he added, pointing to the complexity of capitalist logics permeating the international system.

Leaving aside nostalgia for the Yasuní Initiative days, suggestions advanced by Indigenous peoples were also put on the table. During his intervention, Juan Carlos Jintiach emphasized the need to fully incorporate the “Indigenous REDD+” instrument (RIA in Spanish) within the country’s climate change strategy. In his view, that would be a serious step toward improving Ecuador’s environmental agenda away from simple carbon marketing efforts.

Under the coordination of COICA, this Indigenous leader explained, the Confederation of Indigenous Nationalities of the Ecuadorian Amazon (CONFENAIE) had been actively engaging with their Indigenous peers in South America to deliver a clear-cut alternative to the current REDD+ mechanism that they see as unfair and inadequate to protect Indigenous rights and sacred knowledge.

Like CONFENAIE, Indigenous communities all over the world are increasingly becoming the masterminds of their own future. In the case of Ecuador, the defense of the Amazon rainforest comes from many fronts strengthened by international support.

As Jintiach told IC Magazine, Indigenous peoples have long engaged in diplomatic efforts at the international level that have usually gone unnoticed. Their goal is to transcend the image of the Amazon basin as an uninhabited space, shifting towards one that restores the integral role played by Indigenous peoples, its millenary caretakers.

Indigenous voices at the international stage

A decade ago, on Sept. 13, 2007, the UN Declaration on the Rights of Indigenous Peoples marked a major milestone for the recognition of Indigenous peoples and their rights. This represented an awaited acknowledgement of the historical injustices they have suffered and certainly continue to resist around the globe in defense of their territories and identity.

Though a non-legally binding instrument, the declaration embodied the dynamics of the changing international system and the lasting imprint that Indigenous struggles in defense of the environment had left on it. Ever since its formal adoption, the declaration has resonated powerfully with Indigenous voices and has set the tone for their proactive diplomatic role in international fora.

Be it at formal UN-led negotiations or through non-state platforms such as COICA, a major trademark of their diplomatic practice is the leading role of Indigenous women. Like the caring role that nature plays in their philosophies, Indigenous women too are taking the lead in Ecuador in their efforts to protect the Amazon by broadening an ever-increasing network of allies and partners abroad.

Last year, Indigenous leaders from the Sarayaku community led by Nina Gualinga, internationally known for her Indigenous rights activism, traveled to North Dakota in a sign of intercontinental Indigenous solidarity. The encounter aimed at exchanging their personal experiences with State violence with the Standing Rock Sioux tribe and to demonstrate that they are not alone in the defense of their rights.

In Ecuador, as any other place where Indigenous peoples face violent state repression, a major issue revolves around their collective right to prior consultations. Article 10 of the Declaration explicitly excludes any relocation “without the free, prior and informed consent of the Indigenous peoples concerned,” a declaration the government continues to overlook or fail at implementing measures to fully respect.

According to a recent report presented to the UN Committee on the Elimination of Racial Discrimination by the Center for Economic and Social Rights (CDES in Spanish), prior consultations in the country have only been ineffectively, let alone partially, implemented. Such is the case of the XI Oil Round, an auction of 16 new oil blocks in the southern Amazon, which threatens the best-protected rainforest remaining in Ecuador and more than seven Indigenous nationalities that reside there. In fact, an independent study demonstrates that only 7 percent of the population and 39 percent of the communities in the area were consulted.

Despite being a legal instrument inscribed within the Constitution (Article 57, paragraph 7), the overt disregard of the requirement for prior consultations greatly explains the tireless Indigenous defiance against past and current administrations. This has also contributed to a widespread stereotype of Indigenous antagonism in national politics.

Indeed, for the average Ecuadorian, diplomacy and Indigenous peoples do not belong together. Countless road blockades and national strikes to protect their lands in the past, along with persistent levels of discrimination, have deprived Indigenous communities of serious recognition in the elitist world of foreign affairs.

Yet, the absence of Indigenous thought in foreign policy is not a phenomenon confined to Ecuador. Nor does the recent resurgence in contributions to global civil society take place in a vacuum. From engaged scholars exposing the importance of the Amazon for world affairs to the renewed interests in alternative Indigenous conceptions of property, contemporary discussions are increasingly turning to Indigenous peoples and their wisdom.

National governments in South America and across the globe, on the contrary, have not kept up with the times. Where Indigenous territories barely affected by deforestation, cover 25 percent of the Amazon, the rest of the region has fallen prey to the “national interest” principle guiding most foreign policy practices today.

Indigenous peoples are heirs of unique cultures and caring ways of relating to people and the environment. As they understand that the destiny of the Amazonia, their home, is too important to leave in the hands of governments alone, their incursion into diplomacy reminds us that its protection is humankind’s common endeavor.

While no single government can do the job on its own, Ecuador is now at a crossroads that is prompting major foreign policy shifts. At a time when national politics bustles with polarization and serious corruption allegations –usually involving the oil sector– a genuine acknowledgment of, and engagement with, Indigenous thought in the development of international relations and the practice of foreign policy could mark the turning point we all need.

May such a change find the country willing to integrate Indigenous voices and visions before the consequences of climate change drag us all down.