Drones and cameras in the jungle: Report of the residents of ejido Pichucalco, Montes Azules Biosphere Reserve

On Tuesday, August 13th, a dark plane, with its front like a duck and of a class that we have never seen here before, flew silently, quieter than a helicopter and as if lifted on the wind, and came very low at around six thirty in the evening (5:30pm in daylight savings time) from the direction of Candelaria, went over the town, slow like we said, turning on its lights on one wing, later in back, later on the other wing and, like that, one by one all its different-colored lights. From here it continued toward the mountain of Altamirana (Perla River) and in San Quintín it turned toward Miramar (the lake) in the direction of the Galilea mountain.

To denounce the act and to know what type of plane it was that passed over our heads days later we went to our compañeros in civil society. They showed us a series of images of different types of planes. Quickly we identified the one we had seen and the compañeros told us its characteristics. It is an un-manned aerial vehicle (UAV), known as a drone, the Global Hawk RQ-4 model (also called Trion II+), used by the United States Air Force as a surveillance aircraft. Manufactured by the company Northtrup Gruman, it is the most advanced and recent model of its kind. To clarify further the plane’s visit, we attach two images of this type of aircraft and a map, which indicates with a gray circle the route the drone followed, and with a red dot the location of our ejido Pichucalco. 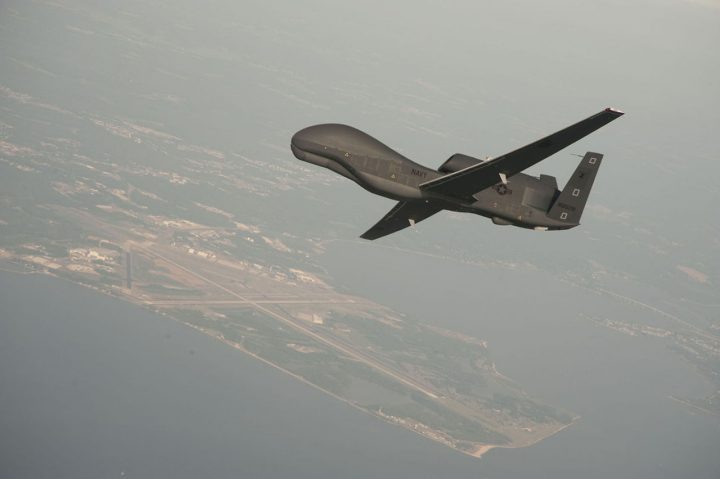 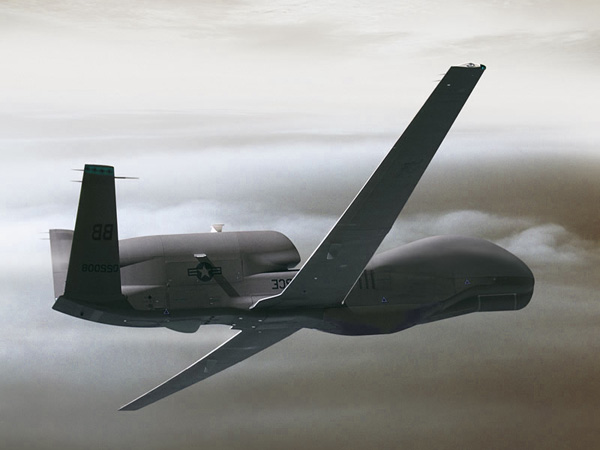 But we also found out that we were not the only zone visited by these spying eyes. The day that this plane passed over our town coincided with when EZLN compañeros reported several similar planes, according to Comandante Tacho, and announced in a communique the 14th of August the following: “We advise you that the 12th and 13th of August, 2013, in the night-time, military planes were doing fly-overs of the zones of the five Zapatista carcoles, locations where the course Liberty According to the Zapatistas was being given.”

Aside from this similarity there is a point on which the plane incidents do not coincide. In the zone where we live, which is the rebellious perimeter of the Montes Azules Biosphere Reserve, there were not courses of the Escuelita (Little School).

Furthermore there is another act that the compañeros of the settlement Benito Juárez Miramar, which is in our zone, reported the 6th or 7th of August: the discovery of two cameras hidden in the trees.

Maybe the plane and the cameras had to do with the Escuelita and maybe not, or maybe they had to do with the announcement of the creation of the Montes Azules Rebellion Movement that we made known on July 30th. Maybe with them already watching, all of this combined was enough to scare the fucking government.

In trying to find an explanation there is a fact that one of us remembered and it seems to explain further why the government was so damn scared. Fourteen years ago in the exact same dates as passed these events, from all of the Montes Azules zone we went in commissions to help the plantón (encampment or occupation) of compañeros in the neighboring ejido Amador Hernández, where the army had arrived by air and land. And on the 13th of August, 1999, groups of students who had participated in a cultural encuentro, more than a hundred of them, came from the La Realidad Aguascalientes (now a Caracol and Junta de Buen Gobierno) to our zone to pressure for the withdrawal of the soldiers. They had arrived in what today is the Caracol days earlier from Mexico City and also other countries to participate in the National Encounter in Defense of the Cultural Patrimony. This exact day of August 12th, while Sup Marcos was inaugurating the work, the military entered Amador. For this reason early the next day we went to Amador, us along with all of the students.

We think that Enrique Peña, who we have baptized as the TP because he is the Títere Peña,* in the context of the growing people’s movement and mobilization against his initiative to reform the Constitution, which would deliver the nation’s gas and oil to the capitalists, was informed by his bosses (those here in Mexico who designated him for the presidency and who for twenty years have governed the country) that in the south east, more specifically in the Lacandon Rainforest, taking advantage of this context of agitation nationally and with the twentieth anniversary of the armed uprising of January 1, 1994 already approaching, that people would be preparing a new front in the struggle. These frightened governments, which say they are only advisers to the TP, remembering what happened in 1999, imagined that the instrument of this new front would be the Mexican and international students coming to the rainforest in these dates for the Escuelita. This is what we think that TP’s adviser-puppet masters were thinking, and what convinced them to enter Montes Azules because it will be the source of the agitation, along with other places. This is what we think the politicians, going back twenty years, who now give orders to the TP, were thinking and definitely his security adviser, the Columbian General Oscar Naranjo Trujillo, director of the National Police in his country for the past year, was also thinking this because generals, above all those from the Latin American armies who act as agents for the gringo intelligence agencies, think in general like generals, and not how the common people think.

For this reason there are things, in fact the most important things, that even with all their powers those in power can’t do, for example, think like the people think, especially politically organized people. That which communities create, in their own time periods, in their ways and their consciousness, is fed by the time that they spend in the journey, by the land that they live on, and by the conditions in which they live. Increasing the pay for local spies, training them (not just pointing things out), and making sure they don’t drink so much alcohol might improve the alcoholic quality of their reports but, still, even if power cures its fear that every time it will keep making the same mistakes and that a David is still possible, even if power un-clouds its mind, to really know the path of the brave and to block this path would require working from a heart similar to theirs, and this, for power, is impossible.

One thing more, to piggy-back on this, which at the least had something to do with the drone and maybe with the little cameras too. It happened Friday the 16th around 11 AM and Monday, August 19th, around 1PM. A very well-known helicopter from the state government (orange-colored with white) flew over the zone with a route slightly different from the Drone’s route: it canvassed all of the irregular settlements in the Montes Azules Biosphere Reserve threatened with displacement. The compañeros from Pichucalco said that it came from Candelaria going in the direction of Taniperla (in the attached map the route it followed is marked in orange). Normally the crews on these flights are political operators from the government, this is what they’re known as, who go offering, with threats to the people, a little bit of money, or a little bit of land so that they will agree to leave the area, even though they already have been there for years, since before ’94, and in the law they have the right to stay where they are.
Ok, up to here this text is to familiarize us with the events that took place during the third week in August in our region of Montes Azules, and also a little bit of our interpretations of why the gringo drone went over our town and also our interpretations of the little cameras in the trees, furthermore the Chiapas government’s helicopter that on the 16th and 19th arrived like the caboose of a train.

To finish. Don’t despair, in a few days we will send you the details of which now a month ago we advised that we would send: a little more concerning what or who we are, who we will call together, how we are thinking to progress, what will be the topic and our approach.

Stay calm and don’t forget to save your energy because the night needs to be illuminated from your hearts.

*Títere means marionette. The nickname is also a double entendre for Tepezcuintle -TP-, the name in Mexico for a common animal in the jungle, known as paca in English. Tepezcuintle come into communities and eat the crops, so people hunt them to protect their crops.