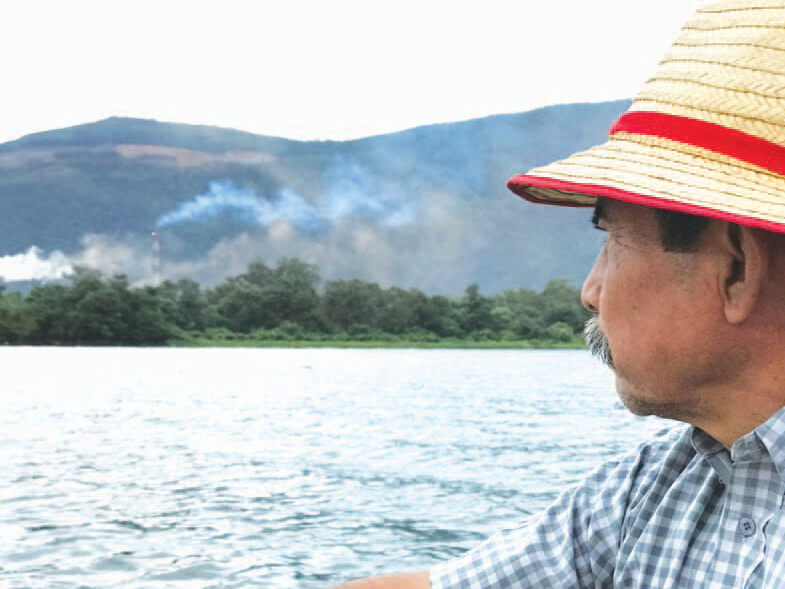 SAN FRANCISCO –– An open-pit nickel mining operation that turned Guatemala’s largest lake into its most polluted met its match when Q’eqchi indigenous leader Rodrigo Tot led his community to a high court victory for traditional land rights and went on to accept the Goldman Environmental Prize in a ceremony here April 24.

As unstable global demand for nickel caused the mine to close and reopen over the years, Tot not only garnered legal support for defense of the land but also headed on-the-ground efforts that kept miners from carrying out further environmental destruction in his community.

“In order to defend the land, the water, the mountains, the animals and the environment, we don’t allow any company to come into the community because we don’t want contamination,” Tot said in Spanish during the annual Goldman ceremony that recognizes grassroots organizers from around the worldwide.

One of the limited number of people in his indigenous community to speak his country’s official language of Spanish in addition to their own, Tot proved his ability to communicate between cultures and won election to the highest office in the town of Agua Caliente.

Joining him in receiving the 2017 Goldman trophies were:

The Goldman Environmental Prize, known as the “Nobel Prize for environmental activism” was established in 1989 by late San Francisco civic leaders and philanthropists Richard and Rhoda Goldman. Prize winners are selected by an international jury from confidential nominations submitted by a worldwide network of environmental organizations and individuals.

Like many Goldman Prize winners and martyrs, Tot’s success in protecting Mother Nature has come at a high price in the cost of human life. In 2012, a year after his landmark court decision, two of his sons were shot on a bus to Guatemala City, in what appeared to be a staged robbery targeting them. One died, and the other survived with grave injuries.

Tot, the newest Goldman representative of the South and Central American region, was born in central Guatemala just as the mining boom of the 1960s got underway. After losing his parents to illness at a young age, he moved to live with family members in the eastern village of Agua Caliente when he was 12 years old.

He survived the country’s 36-year civil war against military dictatorship, in which a U.N.-backed truth commission found that 83 percent of the more than 200,000 people killed or disappeared were ethnic Mayans and that the Guatemalan government was responsible for 93 percent of all human rights violations and violent attacks.

At age 59, he still lives in the small village where he came of age, learned how to farm, got married, and raised his children.

Tot never received formal schooling but educated himself to speak Spanish by listening to others—a valuable skill to an indigenous community that was culturally disenfranchised.

Agua Caliente is located in the jurisdiction of El Estor on Lake Izabal, the largest lake in Guatemala, in an area of vital importance to the Q’eqchi. Descendants of the Maya, the Q’eqchi make their living by farming and fishing.

They defended their territory from Spanish colonists in the 16th century, and hundreds of years later, they are still fighting for it, this time facing their own government and multinational corporations interested in tapping the nickel deposits under it.

In the 1960s, the Guatemalan military government began issuing permits to the mining companies in an attempt to cash in on rising nickel prices.

The Constitution prohibited open-pit mining, but the government suspended the Constitution, dissolved Congress and passed a new mining code, according to Klippensteins, Barristers and Solicitors, the Canadian private legal counsel for some of the many aggrieved local people.

They claim the code was largely written by a mining engineer hired by Inco, the Canadian company granted the nickel concession known as El Fénix in 1965. Inco received a 40-year mining lease for the 240-square-mile concession near El Estor.

El Fénix ceased operations in the 1980s as the price of nickel crashed, but not before discharging untreated wastewater into Lake Izabal and rendering it the most polluted lake in the country.

When the global price of nickel rebounded in 2006, mining investment returned to El Estor. The government issued a permit to restart the Fénix mine and expand its operations into Agua Caliente.

The company’s security forces began to forcibly remove people from their land, just as they had done along with the military in the area in decades past.

The aggression was in violation of international treaties that require free, prior, and informed consent of indigenous communities, the Goldman Foundation noted.

Tot remembers how government and company officials never spoke with the local community about the mines. The Q’eqchi only found out when the miners came on their land to begin work.

Fear began to spread in the community. People were worried that they were losing their land and with it, their livelihood.

Tot saw the need to start gathering evidence of Q’eqchi ownership of the land, and in 2002, as the elected president of Agua Caliente, he brought documents to the government with a petition for land titles.

To his dismay, he discovered that several pages from the official land registry had been removed in a deliberate attempt to deny his people their property rights.

The community’s next recourse was to take the federal government to court. Tot found legal support with the U.S.-based Indian Law Resource Center and Defensoria Q’eqchi, a small human rights organization in Guatemala.

The legal team spent years preparing its case to establish the community’s territorial claims, including elaboration of a geographical study of Agua Caliente and the land’s chain of custody.

Tot translated the details of the proceedings for the community, organized meetings to help gather evidence, and fielded questions from villagers.

On Feb. 8, 2011, two years after Agua Caliente filed its lawsuit, Guatemala’s Constitutional Court issued the landmark decision. Recognizing the Q’eqchi’s collective property rights, the court ordered the government to replace the missing pages from the registry and issue land titles.

The ruling came as a pleasant surprise to environmental and indigenous activists around the world who, like Klippenstein, Barristers and Solicitors, were wary of corruption in Guatemala’s legal system and skeptical of the court’s ability to see how egregious these violations were.

Guatemala’s criminal justice system is one of the weakest and most corrupt in the world. In 2015, Human Rights Watch reported that “rampant corruption within the justice system, combined with intimidation and inefficient procedures, contribute to high levels of impunity.”

The U.S. State Department’s latest report on Guatemala’s judicial system says it fails “to provide fair or timely trials due to inefficiency, corruption, insufficient, personnel, and intimidation of judges, prosecutors, and witnesses.”

In the wake of the court order for Agua Caliente, the executive branch of the government has yet to comply with the ruling, and the mining interests still seek to expand.

In response, Tot set up a community watch group to keep trespassers at bay. In 2014, security forces attempted to enter the village but withdrew after a peaceful standoff led by Tot. They have not returned since.

Meanwhile, Canadian HudBay Minerals Inc., which bought Inco’s interest in El Fénix, sold it to the Russian Solway Investment Group, but not before Klippenstein’s three ongoing human rights cases were filed in Canada for conflicts that resulted in the deaths of several land rights defenders the former owners called “squatters.”

In the most recent outcome of those cases, Hudbay Minerals security guard Mynor Padilla was acquitted in a Guatemalan court of murdering Guatemalan community leader and indigenous activist Adolfo Ich in 2009, and of the point-blank shooting of another community member, German Chub, now paralyzed for life.

“Unfortunately, this acquittal in Guatemala is what we always expected and predicted,” said Murray Klippenstein, one of the lawyers for Ich’s widow Angelica, who is bringing the Canadian cases. “The Guatemalan legal system is corrupt and seeking justice there is, sadly, hopeless, especially against large international corporate interests like Hudbay.”

The company’s successor Solway Investment Group calls itself “a responsible employer and neighbor.” It says it “takes pride in being a positive force in the development and support of local social structures.”

“The Group’s primary focus is to minimize the environmental impact on the neighborhoods surrounding the Fenix production facilities,” it notes.

It claims several environmental protection initiatives related to El Fénix, including implementation of seasonal terrestrial and aquatic biodiversity monitoring of endangered species in close proximity to the mining infrastructure and industrial areas by a scientific contractor working during both dry and rainy seasons.

Meanwhile, the community of Agua Caliente continues its quest to secure land titles. Tot’s struggle goes on. The high court order that remains to be carried out is now a case being expedited at the Inter-American Commission on Human Rights.

This article was originally published at Native Sun News. It has been re-published at IC with permission from the author.