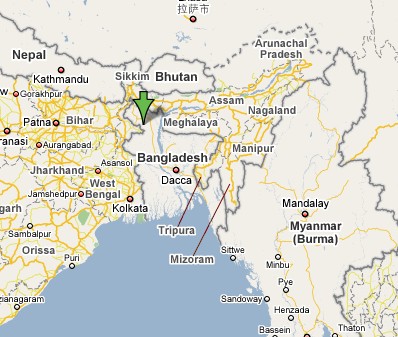 Development Bank pulls away from Phulbari

Mines and Communities reports that “one of the most vilified mining proposals of recent years has hit a major stumbling block, as its key financial backer suspends support. Early this month, in a statement to opponents of the Phulbari coal mine in Bangladesh, the director general of Asia Development Bank (ADB)’s Private Sector Operations Department declared that his agency would ‘decline the opportunity’ of investing in the project.”

Noted here in January, the Asian Development Bank was considering a plan to give a $100 million loan to GCM Resources, the UK company behind the massive coal mine scheme. GCM had also asked the bank for a $200 million “political risk insurance package” to help protect them from any losses they would incur through local resistance… In 2006, over 50,000 people gathered to protest the mine, subsequently forcing GCM to shut down the operation and flee.

That number — 50,000 — is one tenth the number of people that would be displaced and otherwise effected by the dam, should it be completed.

A joint statement released on April 4 by Urgewald, the International Accountability Project, BanglaPraxis, the Bank Information Center, and the World Development Movement explains that, while the ADB withdrawal has dealt a “major blow to the UK based company,” it is still backed by a handful of other banks, namely “Barclays (UK), UBS and Credit Suisse (Switzerland). Among its other investors are the British hedge fund RAB Capital and the mutual funds manager Fidelity from the US. The ADB’s decision sends an important signal to these institutions about the unacceptability of their investment into this project.”

Civil society organizations in Bangladesh, Britain, and throughout the world “are now calling on these financial institutions to follow suit and pull the plug on the Phulbari coal project,” ends the joint statement.

For background, you can watch the documentary, The Blood Soaked Banner of Phulbari on Bangla Praxis.

Call for a thorough independent investigation into the human and environmental impact of the Phulbari coal mine project with the meaningful input of local communities.

Use their financial influence in GCM Resources Plc. to ensure that the company abides by the recommendations issuing from the independent investigation and to make certain that it complies fully with national laws and international human rights standards.

Carefully evaluate the impact of their current investments on the enjoyment of human rights around the world, and include a clear human rights impact assessment in future investment decisions. Promote greater transparency in their financial transactions.

Please write to GCM Resources Plc asking it to:

Suspend activities in Phulbari until a thorough, independent and fully-consultative investigation into the proposed project’s human and environmental impact has been conducted and abide by the recommendations resulting from this investigation.
Fully respect the land rights, resources and livelihood of all local communities affected by any subsequent mining activity, and provide fair and adequate compensation wherever appropriate.

Take all necessary measures to minimise the environmental impact of mining activities and avoid the pollution of watercourses.

Comply fully with national laws and international human rights standards in all aspects of its activities, in particular as regards the adverse effects of these activities on indigenous and local communities. Only carry out operations subsequent to a full human rights impact assessment, and having fulfilled, inter alia, the legal requirement to engage in meaningful prior consultation with persons affected.