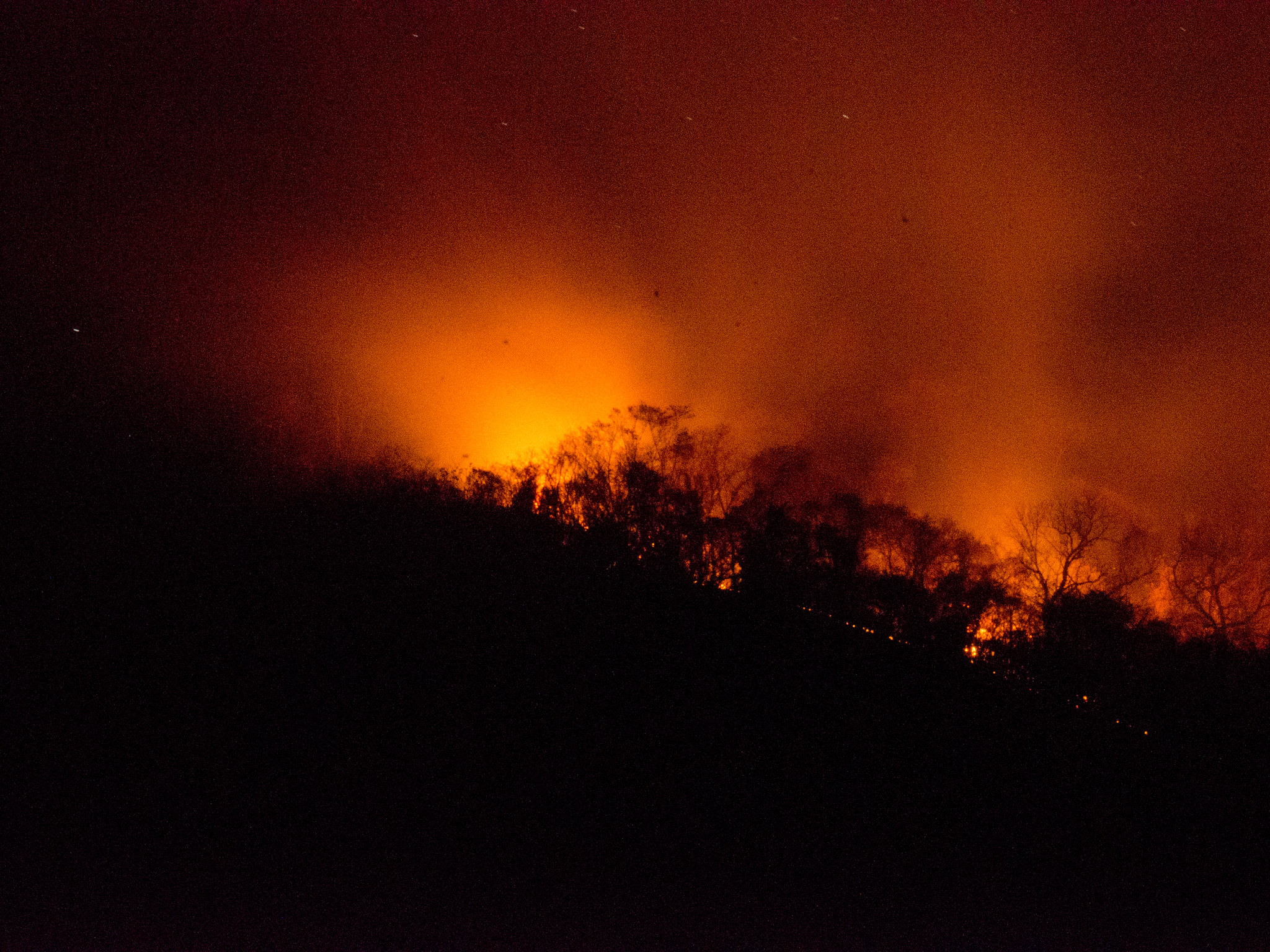 Indigenous organizations demand action to halt the destruction of the Amazon
Support our journalism. Become a Patron!

On Sunday morning, August 25th, urban residents of Santa Cruz de la Sierra awoke surprised to sight of wild falcons and toucans perched on their apartment balconies and garden plants. The parched tropical birds had travelled over 300 km to seek refuge from raging forest fires in the Bolivian Amazon, a region known as the Chiquitania, the world’s largest tropical dry forest. In recent weeks, forest fires have extended across the length of eastern Bolivia to the now ravaged Ñembi Guasa park, a refuge for “uncontacted” Ayoreo people on the Paraguayan border.

While international attention and ire has focused on the burning of the Brazilian Amazon and responsibility of the ultra-rightwing government of Jair Bolsonaro, across the border in eastern Bolivia, equally devastating wild fires in the past three weeks have destroyed nearly 1 million hectares. Response by the ideologically leftwing government of Evo Morales has been forced, instead, largely due to domestic pressure by Bolivians that increasingly view the response as not only as too little too late, but also directly blame Morales’ pro-development policies for ongoing destruction of the Amazon.

The fires threaten at least four protected reserves as well as the Noel Kempff National Park, home to over 3500 species of flora, 1500 species of fauna, including jaguars, tapir, and 35 endangered species that now can be seen escaping along the dirt roads used by local volunteer fire fighters braving fire storms with limited equipment. The historic Jesuit mission town of San Jose de Chiquitos has become a shelter for rescued wildlife while the popular vacation town of Roboré, now surrounded by burnt vegetation, is the makeshift headquarters of government response operations, established late last week.

Despite the arrival of a “SuperTanker” Boeing 737 from California and recent high profile visits from the president and government ministers, locals are upset by what they see as authorities’ slow response, refusal to officially declare a state of emergency and reluctance to ask for international aid. The fires have already reaped a heavy toll, currently affecting 1,817 families, according to the Ministry of Defense, from the Chiquitania’s largely rural and indigenous communities whose well-being and livelihood depends on the land. Biologists estimate that it will take 300 years for the tropical forests to regenerate.

Across Bolivia, reaction to distressing images and reports of the ongoing disaster has boiled over into public anger. For many, the government’s overdue response is a cynical attempt to keep public anger from growing to the point of disrupting Evo Morales’ upcoming reelection bid for a fourth term in October. Polling remains narrow with his closest rival, former president Carlos Mesa, and Morales’ intended fourth term would violate explicit constitutional term limits.

Morales’ waited until Sunday morning, only hours before national protests were held in cities across the country, to announce that Bolivia would accept international aid, reversing his previous position, and suspended election campaigning in light of the forest fires. Presidential Minister Ramon Quintana made the electoral paranoia explicit, accusing the political opposition of starting “deliberate fires” in order to create a “banquet of lies, defamation, slander”. At a public rally Monday, Morales ridiculed the protests of environmentalists as the “electoral nuisance of small groups”, who hypocritically pollute at the supermarket.

A conference in Santa Cruz on the Chuquitana forest, organized by Foundation TIERRA, opened with tense words Friday as a community leader from the Chiquitana Indigenous Organization (OICH) denounced the absence of representatives from the state forestry and national land institute, “they were invited, where are the guilty for the fires?”. Indigenous leaders and civil society organizations point to government policies for encouraging deforestation and forest fires.

In July, one month before the start of the forest fires, Evo Morales issued a presidential order (Supreme Decree 3973) further loosing restrictions for land clearing fires in the Bolivian Amazon from 5 to 20 hectares, modification to a 2015 law permitting land clearance. Pablo Solon, former Bolivian ambassador to the UN and director of the Foundation Solon, points out that deforestation rates have spiked in recent years, more than tripling this year from 295 thousand hectares in 2016, while 420 thousand hectares were lost last year. Under current regulations, the fine for illegal land clearing is as little as $6.60 per hectare, while the estimated cost for seeding the reforestation of one hectare is $1,000.

Forest fires in the Chiquitania follow years of detrimental environmental policy from the Morales government, designed to open the Bolivian Amazon to mega-development projects and commercial interests. In 2011, the state deployed police to violently repress the national march of indigenous organizations opposed to the construction of an international highway through the Indigenous Territory and National Park Isiboro Sécure (TIPNIS). Plans to construct hydroelectric dams throughout the Amazonian basin, including in the world famous Madidi National Park, are moving ahead despite indigenous and local protest. In the past decade, Morales’ ruling party has nurtured an alliance with the elite soya and cattle agribusiness sector of Bolivia’s tropical lowlands, centered in Santa Cruz, South America’s fastest growing city.

Evo Morales has carefully cultivated his image on the world stage as an indigenous defender of the “Pachamama (Mother Earth)”, but his domestic policies belie another reality. In a recent interview, Marina Silva, former Brazilian environment minister during Lula da Silva’s first presidential term, stated “at the moment we have two poles of deforestation: Brazil and Bolivia, at behests of the soya project under Morales or the politics of Bolsonaro. Deforestation in the rest of the Amazonian countries, like Colombia or Peru, is serious but remains overshadowed. The lack of commitment is as much as a question for the left as for the right.” In the same manner as Bolsonaro, Bolivia’s Vice-President Alvaro Garcia Linera accuses detractors of Amazonian development as engaging in paternalist “ecological imperialism”.

On the day of national protests Sunday, Morales demonstrated where his interests lie by attending the annual meeting of the regional ranchers’ federation of Beni in the Amazonian city of Trinidad. At the meeting, federation president Abdon Nacif denounced calls to repeal the controversial Decree 3973, stating that prohibiting forest clearing would harm regional development. Earlier this year, the Morales announced alongside private business leaders in Santa Cruz the expansion of the agricultural frontier in the Bolivian Amazon by an additional 250 thousand hectares, largely destined for the cultivation of transgenic soya. Starting this month, Bolivia will export as much as 200 thousand tons of beef to China’s growing consumer market. Only last week Morales’ boasted that businessmen tell him they earn more now with his leftist party than during previous neoliberal governments.

Evo Morales has defended land clearance permits by justifying the importance of using fires (chaqueos) for rural subsistence, “small families that don’t use chaqueo, what are they going to live on?”. However, members of indigenous communities see this condonation as an affront to their livelihood and methods of cultivation. “For us, this is something disastrous. We have planted mahogany, chestnut, many trees and are repopulating the forest. Now as consequence, everything we have worked to create is going to be stripped down and burned. Practically, this decree is sweeping away everything we have created”, said Lidia Anti from the Communal Organization of Amazonian Women of the Beni.

The forest fires ravaging the Chiquitania are closely tied to a recent surge in land grabbing and irregular titling in the region, condoned and aided by government agencies. According to the director of Foundation TIERRA, Gonzalo Colque, the fire zones in the Chiquitania directly correspond with expansion areas of the agricultural frontier and colonization. The government has accelerated land donations in the region, waving the requirements of regulatory process. Between 2011 and 2018, 7 million hectares have been titled in the region. According to official figures, the majority (57 percent) of new land titles in the Chiquitania have gone to medium and large property holders, while only 28 percent have benefited small property holders.

“Those that have received land are not agricultural workers. They don’t live there, and many have deforested without management practices. This is dangerous. The beneficiaries are members [of the ruling party] who do not live from agriculture but instead have fattened up to later sell the land to industrial agriculture”, maintains Colque.

In the past two years, communities and civic organizations in the Chiquitania have engaged in road blockades to protest the lack of transparency in land donations by the national land institute. Irregular titling of public land includes donations within the limits of five protected forest reserves. Government complicity with land grabbing in Bolivia recently even included the titling of 60 hectares within the UNESCO protected site of pre-Incan ruins in Samaipata.

Justice for Indigenous Peoples and the Environment

Since the outbreak of forest fires in the Chiquitania, eighty civil society organizations, including the Catholic Church, have called for the repeal of legislation and presidential decrees permitting fires and land clearance. Evo Morales has responded with a temporary “ecological pause” for new land titling. While Carlos Mesa, Morales’ principal opponent in the upcoming presidential election, has denounced the “anarchy” of land donations and deforestation under Morales, Amazonian indigenous peoples can expect little from possible political change. Mesa also recently endorsed the “Santa Cruz model”, and its export-oriented industrial agriculture, as the development path forward for Bolivia.

Not content to wait for change from the political system, indigenous organizations have called for direct action to halt the destruction of the Amazon. In a strongly worded statement, the Coordinator of Indigenous Organizations of the Amazon River Basin (COICA) declared both Evo Morales and Jair Bolsonaro “personas non gratas”: “We, indigenous peoples, hold the governments of Jair Bolsonaro and Evo Morales responsible for the disappearance and physical, environmental, and cultural genocide currently present in the Amazon.” Further, the statement condemns the policies of both governments, which “only aims to benefit the interests of powerful economic groups that seek to convert the Amazon into land plots for agricultural megaprojects, mines, dams, and energy projects.”

Bolivian indigenous activist Alex Villca has called for a trail of responsibility to be held against Morales for crimes of ethnocide and biocide, a call that has been reiterated by indigenous congressman Rafael Quispe and the former state ombudsman Rolando Villena. Outside of public opinion it remains to be seen if anyone will be held responsible for the destruction taking place in the Chiquitania. Sunday’s rally for international aid in Santa Cruz transformed into an impressive and large protest as thousands flooded the city’s central plaza into the evening. Demands for the repeal of Decree 3973 were ubiquitous and chants for justice reverberated across the crowd. “Evo, Muderer!, Evo, Murderer!”

Devin Beaulieu is an anthropologist living in Bolivia who has worked for years with indigenous people in the Bolivian Amazon.