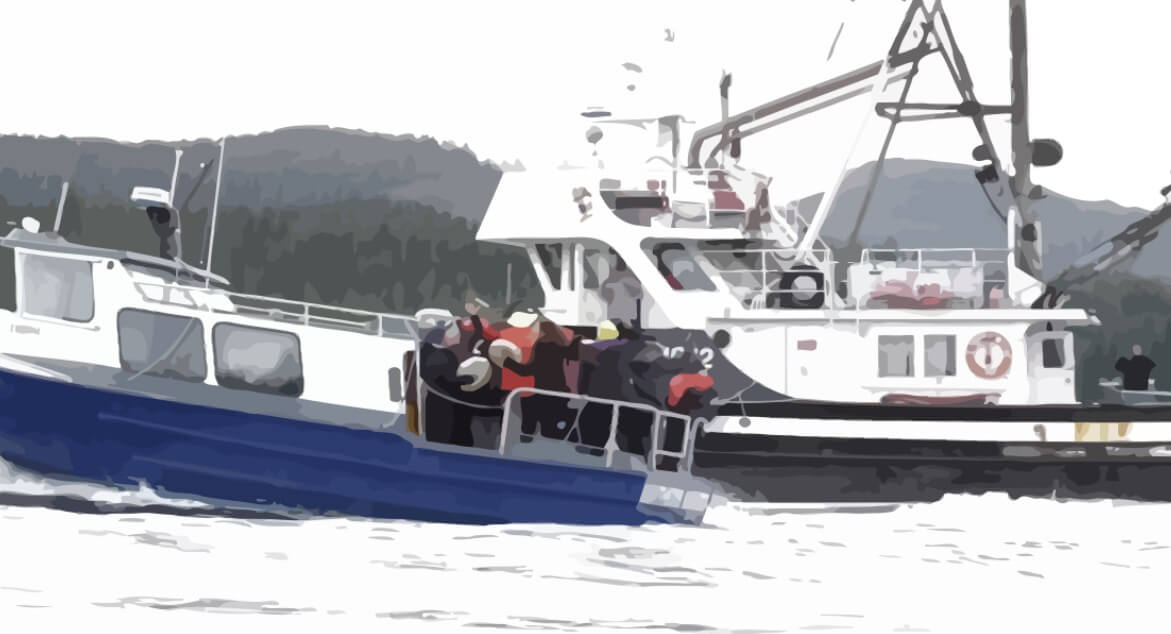 APRIL 2, 2015 – On Wednesday evening, Heiltsuk vessels escorted commercial herring boats as they made their way out of the Central Coast. After 10 days of intense negotiations and demonstrations following a herring seine fishery that violated the Heiltsuk’s ban, the Nation successfully closed Area 7 to the commercial gillnet fishery.

“The fishery is going to be closed now,” declared Chief Councillor Marilyn Slett late yesterday afternoon. “I don’t think the Department of Fisheries will announce that today. But we will.”

DFO advised gillnet harvesters to move to the Central Coast on March 24, and spent the next week conducting sounding and aerial surveys to find herring so that a fishery could be opened. With very few viable options, DFO attempted to open a fishery in area 6-16 on March 31. Industry did not fish the area, as the herring were too few, too small, and too deep to harvest – confirming the Heiltsuk’s own stock assessments. Given the bleak outlook, the commercial fleet departed the Central Coast.

This was not the only success of the day. “We got a commitment to put together a joint management plan with DFO,” said Heiltsuk resource stewardship director Kelly Brown. “They’ve never done this before.”

“This was a momentous day for our Nation. We have reaffirmed our jurisdiction over our territory,” said Slett.

After the conclusion of two full days of meetings with Regional Director General Sue Farlinger, tensions have lessened, and the Heiltsuk look forward to co-governing herring stocks with DFO. “I’d really like to thank Sue and the Department of Fisheries and Oceans, even though they couldn’t officially shut the fishery down,” stated Brown.

The Heiltsuk have now vacated the DFO office near Bella Bella, which they occupied for over 72 hours as they worked toward the enforcement of a gillnet ban.

Video and sound bites of the gillnet fleet departing and Heiltsuk statements available at:
http://tinyurl.com/fleetdeparts