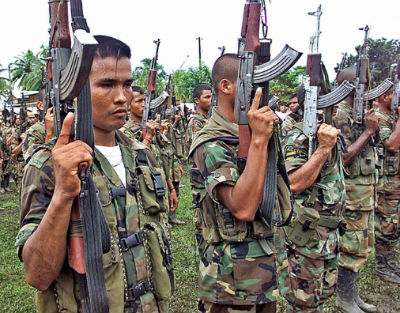 In recent weeks, a wrongful death lawsuit was filed against Dole Food Company on behalf of 73 people—survivors of murdered trade unionists and campesinos throughout the region of Dole’s Magdalena banana plantations in northern Colombia.

The lawsuit, filed by the Florida law firm Conrad and Scherer LLP, accuses the company of funding the right-wing paramilitary group “the United Self-Defense Forces of Colombia” (AUC) to carry out evictions, assassinations, and terror tactics in the region.

To support the lawsuit, the Washington-based NGO International Rights Advocates is asking individuals and other NGO’s to write the U.S. Department of Justice and urge a full investigation of Dole’s connections to the AUC, which was itself “designated a terrorist organization by the U.S. government in September 2001.”

Last week a Florida law firm, Conrad and Scherer LLP, filed a wrongful death lawsuit against Dole Food Company, one of the largest banana companies in the world. The lawsuit, brought on behalf of 73 plaintiffs from the Province of Magdalena, Colombia, charges Dole with having hired the right-wing paramilitary group known as the AUC (United Self-Defense Forces of Colombia) to act as a “local police force” in and around the company’s Magdalena banana plantations.

The plaintiffs allege that the AUC paramilitaries performed a number of violent services for Dole, including:

The lawsuit against Dole can be viewed at http://www.iradvocates.org/dolecase.html.

International Rights Advocates, a non-governmental human rights organization in Washington that supports the lawsuit against Dole, is asking individuals and organizations to write the U.S. Department of Justice to urge that it investigate Dole’s ties to the AUC paramilitaries. The AUC was designated a terrorist organization by the U.S. government in September 2001.

The Justice Department has thus far not shown much interest in investigating U.S.-based multinational corporations alleged to have links to Colombia’s paramilitaries.

In fact, before the current Attorney General, Eric Holder, was sworn in by the Obama administration in February of this year, he was a partner at the Washington D.C.-based law firm Covington and Burling, LLP, which represented Chiquita Brands in a criminal case stemming from Chiquita’s admission that it paid the AUC paramilitaries $1.7 million between 1997 and 2004. Chiquita pleaded guilty in 2007 and agreed to pay a fine of $25 million to the U.S. government. Chiquita’s admission and subsequent guilty plea did not result from a Justice Department investigation, but from an exposure initiated by a member of the company’s own board of directors.

Covington and Burling, LLP continues to represent Chiquita in a separate civil suit brought against the company by Conrad and Scherer, LLP and International Rights Advocates on behalf of another group of plaintiffs whose relatives were murdered by the AUC paramilitaries.

If sufficient numbers of people demand an investigation of Dole Food Company, the Justice Department may find itself forced to carry one out, and then to extend it to other multinationals that have also profited handsomely from paramilitary repression against trade unions, peasant groups and human rights activists in Colombia.

Please send a copy of your letter to rp@iradvocates.org. The plaintiffs in the Dole case will be grateful for your efforts.

I write to urge you to carry out a thorough investigation of Dole Food Company for its alleged links to the United Self-Defense Forces of Colombia (AUC), a right-wing paramilitary group that was designated a terrorist organization by the U.S. government in 2001.

A group of 73 Colombian plaintiffs recently filed a civil wrongful death suit against Dole Food Company in a California court, alleging that the company hired the AUC to provide a number of violent services for Dole’s banana operations in Magdalena, Colombia. These services include murdering trade union leaders and intimidating Dole’s banana workers so that they would not dare to join unions or demand collective negotiations. The AUC paramilitaries also murdered small farmers, allegedly so that they would flee their land and permit Dole to plant bananas. Over a period of more than ten years, the AUC carried out a campaign of terror in Magdalena Province against anyone it suspected of aiding or sympathizing with the FARC and ELN guerrillas, in the process murdering thousands of civilians, all so that multinational companies like Dole could conduct their business profitably in the midst of an internal armed conflict.

The allegations contained in the lawsuit against Dole, together with the public testimony given by demobilized AUC leaders like Salvatore Mancuso, who has stated unequivocally that Dole and other banana companies made regular payments to the AUC in exchange for “security services,” should be sufficient grounds to spur the Department of Justice to investigate whether Dole Food Company and other U.S. companies profited by supporting violent terrorists, in the process violating U.S. anti-terrorism laws.

In 2007 Chiquita agreed to pay a $25 million fine in order to settle the criminal charges it faced as a result of its payments to the AUC. That punishment, while woefully inadequate, given the scale of the crimes, stands in contrast to the absolute impunity that Dole Food Company has enjoyed up until today.

Please put an end to that impunity by ordering the Department of Justice to investigate Dole Food Company.